This month’s film night was a great success.  We showed the documentary, The Salt of the Earth to the largest audience this season. Eighty people turned up to watch what was in effect a portrait of the renowned and visionary Brazilian photographer Sebastiao Salgado.

You might wonder whether a documentary that looks at photographs would sustain your interest, but this is not any documentary as the director is Wim Wenders and the story the documentary tells is riveting – there’s no other word.  His training as an economist drove Salgado to look closer at the poor and dispossessed of this world, and you might (or might not) be surprised that, in his time, he’s been accused of fetishizing suffering, because some of these photographs are both beautiful and dreadful.  But we must see them.  ‘Everybody should see these images’, says Salgado.  And just when you feel you cannot take any more of the pain in these photographs, you then see Salgado’s desolation and anguish at the inhumanity of mankind. But did he sink into depression?  No.  Instead, the ending of the film is about redemption and hope and the reconstitution and rebuilding of his barren family cattle ranch in Brazil into a lush green paradise. The farm and its surrounds with its brown hilly desert-like appearance was transformed by Salgado beginning the planting of four million seedlings of native species trees.   Now a nature reserve the land has returned to its natural state as a sub-tropical rain forest and the work and experience that this took is carried forward by the Instituto Terra which carries out research and projects on environmental reconstruction and ecosystem restoration.  Truly the whole experience of watching this documentary is transcendent and emotionally draining – in a good way.  If this can happen here you think, then it can happen anywhere.  There is hope for humanity.  What an amazing documentary.  What a film to watch – go see it.

I wore this lovely skirt.

I’ve had the skirt some time.  Curiously, clearing out my closet made me look at what was left and there it was waiting for me to put it on.  I remember buying it from a local charity shop for not very much.  (‘Not very much’ means it would have been under £5 as this charity shop hasn’t hiked its prices.)

It has a double layer of khaki-green tulle over a rayon skirt. 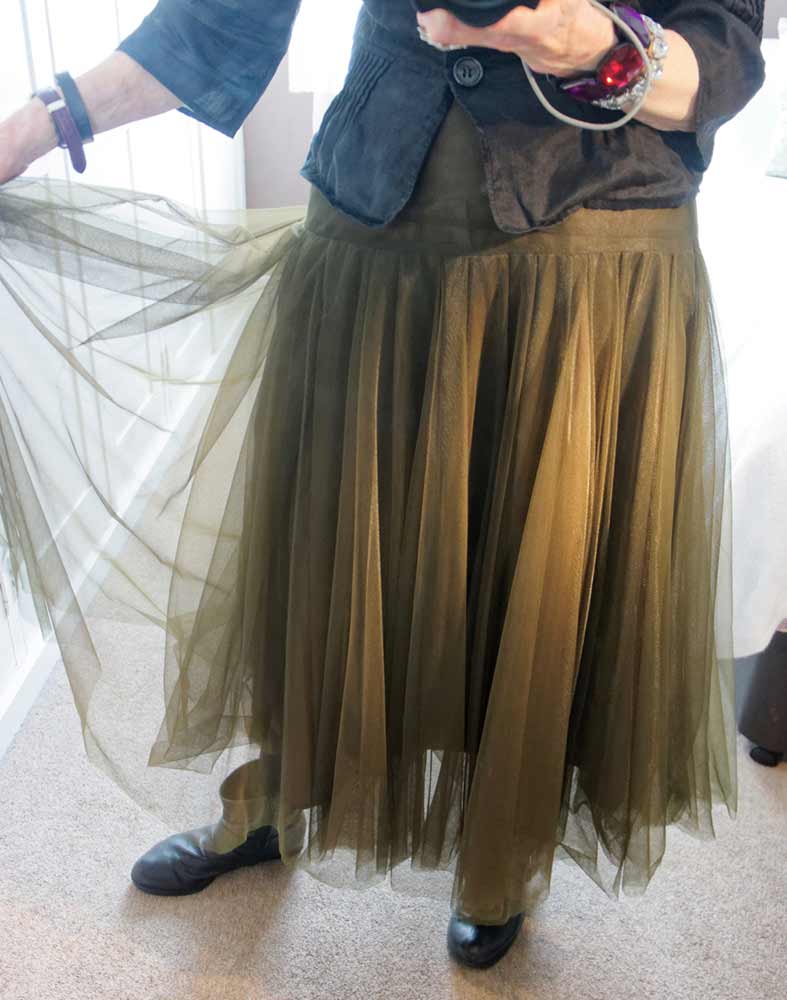 Someone said it looked as though I was wearing a tutu!  Well that would be quite a long tutu!  I don’t like mid-length skirts these days but this one is the exception.  And I really should wear it more often.

With it went a black short-sleeved T-shirt and my thin linen jacket/blouse.  I’ve worn this combo before, but it’s just right for the physical work I do (putting out chairs, running up and down corridors).

And as per usual I wore my little bootees.  I can see from the pic that they don’t go brilliantly with the outfit but they are, or were, so comfortable.

Because, so sad.  After the evening they went straight into the wastepaper basket and have gone to the great tip in the sky, where they deserve to be feted for their long service.  Bought for £25 five winters ago they have been worn and worn and worn.  But that night the heel came off, and a closer look revealed the ‘leather’ was peeling.  I loved them so much, but they had to go.

P.S. And sharing with Patti of Not Dead Yet Style and her Visible Monday who boosted my last post on Facebook – big thank you to you!  And hi there, to those of you who came and had a look at my blog last week – a very warm welcome to you all!