Hello everyone, and a warm welcome to all, and especially those of you who dropped by and signed up after a mention on Tricia Cusden’s recent blog post on street style and her new hat.  Yes, I do love hats and no need to spend gazillions on them!  It’s great to meet you and feel free to comment.

OK, I’ve got several posts on the back-burner and one already half-written but I must give you my monthly film review before the end of January, and tell you about the outfit I wore.

The film was The Dressmaker starring Kate Winslet as Tilly Dunnage, and that dish Liam Hemsworth playing Teddy.  Have you read the book?  The film follows the story to the hilt so you’ll know that two-thirds the way through there’ll be a collective intake of breath.  I’m not going to give you a blow-by-blow account of the plot as it’ll be giving the game away, but (and this is a near plot-spoiler) you could see the film as a spaghetti Western with Winslett playing the Clint Eastwood character – (wo)man returns to town, wreaks revenge, and leaves.  But that’s way too simplistic.  For a start The Dressmaker is a sumptuous feast for the eyes and has numerous wacky, laugh-out-loud moments, but key to understanding this film is that it’s a very Australian film – so there’s an edge to it.  It must be something about the Australian landscape but there’s often a hint of danger and doom running through the DNA of Australian films (Picnic at Hanging Rock anyone?).  But hey, if you want a laugh Hugo Weaving (Matrix, Hobbit, Lord of the Rings amongst many other films) in his role as the town’s police sergeant kind of references his earlier role in Pricilla, Queen of the Desert.  He has the best part, I think, although Judy Davis (My Brilliant Career) is outstanding as Tilly’s mad mother Molly.  Is The Dressmaker a tad melodramatic?  Oh yes, to be sure.  But is it enjoyable and good fun – oh yes, absolutely!

There was a great atmosphere at film night, and we had the most people in the audience ever.  I wore this amazing skirt bought for £3.99 at my local charity shop along with a black T-shirt and my thin linen jacket, which is in the wash, which is why I’m wearing something  different here.

Honestly, I promise you I got out some heels to wear, but then I forgot to take the little bootees off.  Why?  Because they’re so comfortable and I always run around a lot. (For those of you new to the blog – those boots are worn again and again.)  They cost me all of £25 and that was at least 5 winters ago.

The skirt is embroidered back and front and is such a cheery item to wear in these dark nights. 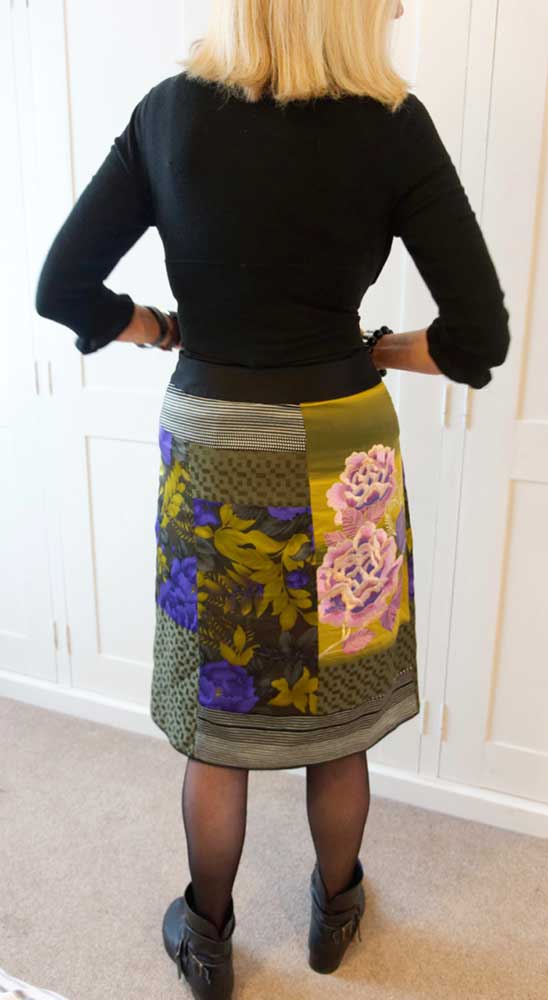 My philosophy, btw, is always dress up if you can!

P.S. And Sharing with Catherine Summers and her weekly #iwillwearwhatilike session