I ask that question because speaking for myself, I think I do lots of exercise, but in actuality, the exercises that I do are now down to once a week.   These are stretching exercises on a mat, plus some weights for building and toning those arm muscles.  One of the reasons the cruise was such a tonic was that I had 3 one-to-one sessions with a personal trainer, and for a while I was continuing those throughout the week – erm, but it’s not so often now.  Discipline, discipline, that’s what I lack.

However, a friend told me that she books, on a regular basis, 10 sessions with a personal trainer who comes to her home, and I’m seriously thinking about that.  I’ll tell you why.  I could go to a senior’s class twice a week just five minutes away from my house.  But the trainer who takes these sessions is too gentle with us – no-one is pushed, no-one is taught new weights or asked to up their ante, apart that is, from her saying ‘go a bit faster’ and ‘go a bit slower’, which everyone, including me, ignores.

My word, the personal trainer on board the cruise (who knew my age) was a shock to my system.  Push is not quite the right word – she shoved me out of my comfort zone!  I almost said at one point, ‘I am 70 you know!’ But her pushing unlocked my back and helped my shoulder injury until it was almost gone.  Because as my osteopath always says – the pains in my lower back and shoulder are down to muscular spasm and nothing to do with the joints or bones, and it’s exercise that will move me on from that daily pain.  So on board ship, I learnt loads of new exercises (that really hurt to begin with) and weights (ditto, actually these were excruciatingly painful) and abs, those muscles had obviously not been touched for years.  All of these exercises I remembered and worked on throughout the week, for a few weeks, but now it’s once a week.

Hmm.  This has to stop.  It’s so easy to slip into i) mild ill-health once you’re over a certain age, and then ii) do nothing much about it. My good friend, Tricia, has written about her slide into not being ill exactly, but neither being all that healthy.  And it is all about dealing with stress and doing the exercise.  Because while Tricia is running a business we all have our stresses (mine is funnily enough, our film society, but that’s another story).   We all need to deal with our lifestyles no matter what age we are, and exercise is such an important part of healthy living through our ageing.  Here’s what I do, which may, or may not, help with your efforts to keep fit and well:

1.You do get all the tests you should be having from your medical practitioner, don’t you?   Because I’d reached the age of 70, I had a routine set of tests for heart and blood pressure – I was fine. But you have had your blood sugar tested, haven’t you?  More about Type 2 Diabetes, below.  In the UK we can get all these tests for free, but even if they cost, think of what you’ll save even if you have to pay, as in, it could save you your leg.

2.But let’s not be too serious. What makes exercise fun for you? I’m a little bit nerdy and techy (not as bad as Mr Frugalfashionshopper – no-one could be more techy than him!).  But I do like a bit of technology, so I love my fitbit (the device that’s worn around your wrist that tells you how many steps you’ve taken plus other things as well).  This has definitely upped my efforts at exercising. This is because we’re meant to do 10,000 steps a day, which I now know I hit about once a week.  Usually my step count is between 6 & 9,000 per day.  But when I write all day (which I can do some days) the total can go down to 2,000 which is way below what you should be doing.  So, with the help of the fitbit, if I’m a bit down from 6,000 off I go for a walk.

But a fitbit won’t suit everyone, so what suits you?  Do you like dancing?  Do you like swimming?  Do you like wandering around shops – it’s surprising how many steps you do, doing just that!  Why not get a pedometer –  they’re not expensive and unlike the fitbit there’s no technology involved.  Reader, I’m telling you, you need to walk, a lot, so why not be in control of this, and be aware of what you’re doing each day!

3.Taking care of your feet is so important.  Last week I took my grandson to the Brighton i360 (a new attraction on the Brighton seafront) which was great fun. We parked our car some distance away and this is me and my grandson walking down a back street in Brighton – don’t you just love the graffiti! 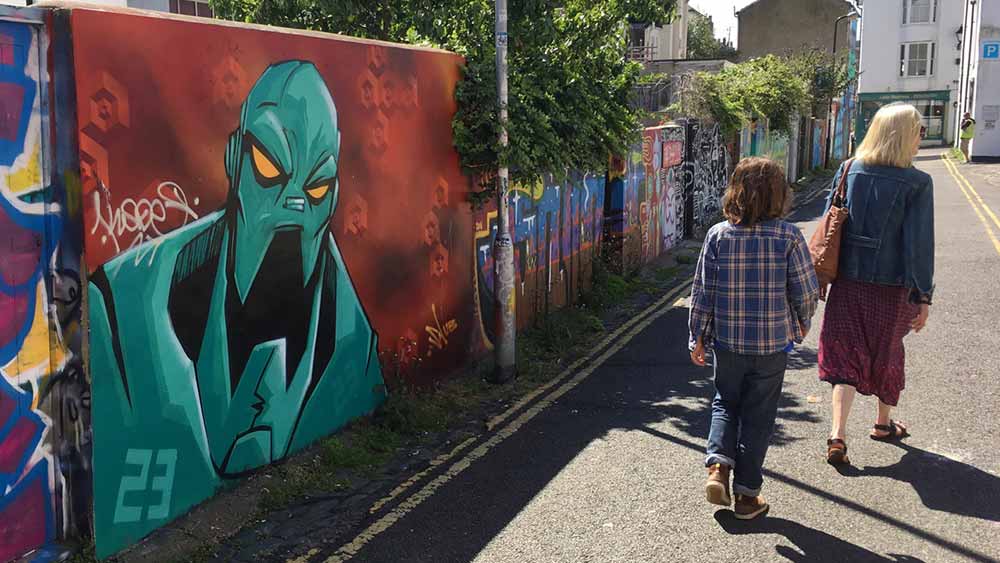 (And, not looking as stylish as I would wish but hey it was my grandson’s day!) Anyway, by the evening, I’d walked over 13,000 steps, on a hot day, in my sandals (the ones here). 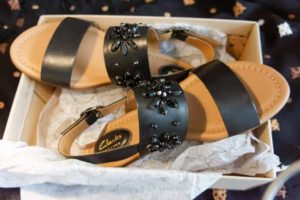 And, oh boy, were my feet sore.  So I took extra care of them over the next few days and made an appointment with my chiropodist who I see regularly.

Do you? See a chiropodist, that is?   It’s so important to treat the ageing foot with respect, certainly mine have less fat and flesh on them, and my bony ankles now get rubbed raw on sandals that I wore last year with no problem (like in this pic below taken last year).  And no, I haven’t lost weight but I’m looking at my feet now and they’re definitely less fleshy than they were last year. 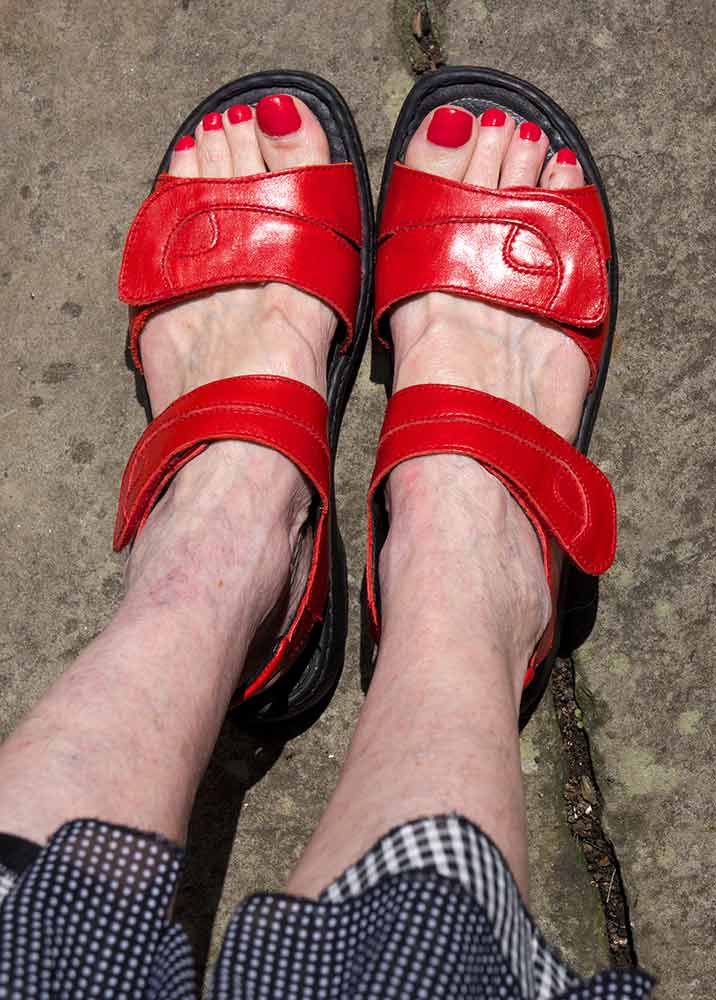 Hmm.  As a nurse I’ve seen some pretty appalling feet in my time, particularly amongst older, frailer persons.   But when I spent a couple of years working at home as a masseur (when the children were young) I was surprised to find amongst my clients, a well-dressed woman, often wearing lovely underwear, with awful feet, and that wasn’t as rare as you’d think.

Feet, take care of them, especially if you’re a diabetic, as the end game if you don’t watch the blood sugar, is feet that get to be in a very bad state indeed with dire consequences.   And Diabetes Type 2 is wholly preventable though our diet – it’s very sobering to think about this. 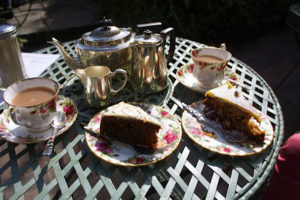 I love cake and you’ve seen this pic before.  But my idea of heaven is not a Pimm’s or a fine wine nor is it a gin and tonic (actually I don’t drink) no it’s tea and cake.  Not a cream cake, thanks, but a fruit cake, if you don’t mind! My mother made a Dundee cake every week, and I can conjure up the taste as I write – there has to be ever so slight a taste of bitterness to it – oh yum!  Anyway, because I have this weakness I go to my surgery and get a simple test done every year to check my blood sugar.

4. Our relationship with food – this is such a sensitive area and subject. Can I say that I don’t exactly have a difficult relationship with food but there are moments…. This is because I’ve had IBS in a particular form for a long, long time.  The IBS was much worse when I worked (funny that) but even though it’s far better I still get it.  You see there’s no comfort eating for me when I’m anxious, nervous and/or depressed.  I can’t, because my stomach is tied up in knots and I just don’t eat because of the stomach pains and the icky feeling that goes with it. So there you go, you might think I have a stable almost ideal weight, but actually quite often I go up and down a few pounds, because every now and then I don’t eat for a day or two.

OK that’s me done and dusted.  So can I say here and now, and wearing my nurses hat, being overweight is not healthy as we age. Think about it – carrying too much weight must strain those knees, hips and the internal organs such as the heart and liver.

What is your relationship with food?  Do you just totally love it and want to eat out of sheer enjoyment?  Or is it a damaging relationship with you unable to say no to that cake, chocolate or plate of chips. Or is it the glass of wine, you can’t resist?   The thing is you need a bit of weight, says my nutritionist, who thinks I should be several pounds heavier (to allow for being ill and losing a few pounds). But not a lot.

5.And finally, take care of your skin in the sun – wear that sun screen. Btw, I’ve changed my sunscreen from Ambre Solaire, which I always used because that’s what I used in my youth. Good enough reason, I thought, and can’t you just conjure up that smell of the oily brown contents of that bottle of Ambre Solaire you bought in the 60s? It must have had all of 0% sun screen factor!  But even with me wearing Ambre Solaire factor 50 I still seemed to burn in the sun.  On the recommendation of a friend (thank you, you know who you are) I’ve changed to Soltan and I don’t burn wearing factor 30 – so it’s obviously got the right ingredients!

That’s the end of quite a serious post – thank you for reading to the last sentence!

You are lovely people, you readers.  And don’t forget if you’ve just dropped by, why not sign up (on the side-bar if on your PC or near the bottom of the post, if you’re on the phone).  You’d be most welcome and I write between every 5-10 days, it varies  🙂