Hi and hello everyone

This is a late review (by a couple of days) as time and events have got in the way again! Mainly grandparent duties coming on my writing days. The week we’ve been over to see our grandchild Oscar two days running, once with a roast dinner cooked by me and put in the back of the car to take to my son’s house (have you done that?) because he was on his own for 3 days whilst his partner was off on a hen-night + 2. And then a phone-call the next day, Oscar’s got chicken pox (oh dear) so could we baby-sit for a couple of days whilst they’re at work?  Actually we couldn’t do much, just a half day. I expect retirement is something that younger people imagine as boundless hours of freedom, when in fact we’re the kind of couple who are always busy with our projects, me with my writing and Mr F with his family history and now some local history in Lewes. Moreover, Pilates classes dominate our week, plus the compulsory walk that we take nearly every day to push up our steps.

Then with me, I have my maintenance appointments (!) hair, nails, face. It’s a busy life and we don’t even volunteer for anything – as yet. So there isn’t much spare time. Btw, re: chicken-pox and older people, we’ve both had chicken-pox and the shingles vaccine, so we should be OK. Anyway I believe the most infectious phase is before the spots come out, and they’d appeared some days before we saw him. Just a rash we all thought, but no.

So how has the month treated you?  At the beginning of the month we were still in a kind of limbo staying with our daughter and family. They’d given up their bedroom for weeks – so we are eternally grateful to them. Anyway finally we moved back to our finished flat at the end of the first week of May and have been getting it ready for visitors ever since. And now slowly I am picking up on the socialising and getting our friends round for coffees, teas and meals – which is lovely!

As for the state of the nation? And the world? Well, actually I won’t comment on it as I am two thirds the way through a piece of writing for My Other Blog – but don’t look for it now as it’ll be posted a few days hence. Over the past few months I’ve started a couple of pieces for My Other Blog but my writing stalled every time as I’ve felt overwhelmed at the state of the world let alone this rather small, and somewhat dysfunctional, first world country. But this issue – I had to write about.

Anyway enough of that, and that is why, people, to keep my sanity I surround myself with blogs written by lovely women, I read about fashion, also cultural events, visit art exhibitions and museums (just at the start of that part of my cultural life) and look out things to watch and read.

How are you all now with the pandemic? Because while cases are down, there’s still a lot of it about. Yes, there are fewer cases in Lewes but they’re still quite high(ish) and as for Brighton, cases are actually going up! We still wear masks in supermarkets, food shops, any shops really, plus I wear a mask in our local cinema and always on  public transport, but now, it’s quite rare to see people wearing masks. Hmm. Well, I shall continue wearing a mask for quite some time. Do let me know what you are doing.

We are also participating in Lewes events, one of which was the re-enactment of the Battle of Lewes. I won’t give you a long history lesson but it is all here for you to read, suffice to say it was a battle that took place in Lewes in 1264, that’s some centuries ago (!) which the present-day Lewesians love to re-enact. 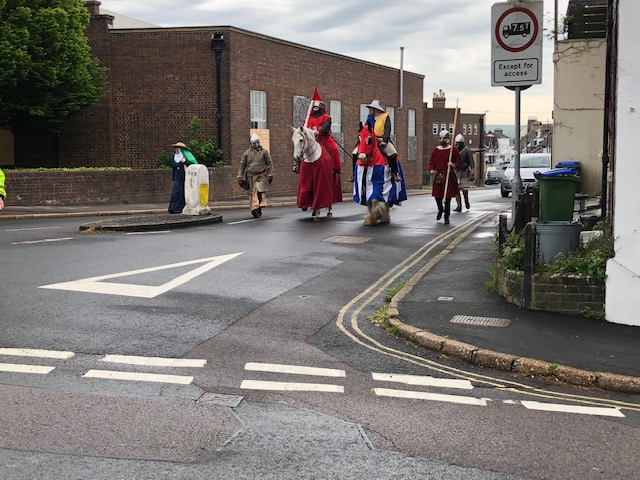 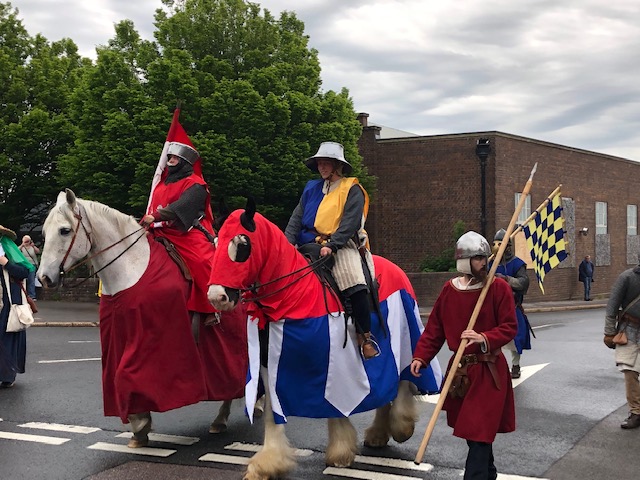 Naturally, it was raining!  As you can see from this short video neither the players or the public following the re-enactment are particularly bothered by the rain. The link, btw, takes you to my much neglected Youtube channel – hope you can get it up and running.

Things we have watched and are watching

We watched 7 films this month – two at the cinema. The first was Wild Men, which was a delightful tale set in Sweden of a man going through a mid-life crisis and attempting to seek out some kind of catharsis through living in the wild.  It naturally goes very wrong and is laugh-out-loud funny at times with some great acting from the cast including Sophie Grabol who was the lead protagonist in the original television series The Killing. Four * for this film.

Last Saturday we returned to that lovely little film society in Newhaven (we set it up several years ago!) to see Petite Maman. Oh my word what a delightful film and so very French starring two lovely young girls as… well the thing is I don’t actually want to give the plot away!  But it’s just such a beautiful film about love and loss and grief and two sweet young girls. So very natural and as I said so very, very French. Do seek it out if you missed it in the cinema. It’s a 4 and a half* film I think.

Three films were really quite rubbish. You know my taste in films, I like to watch a very broad spectrum! But two watched at home were very good. The first was Nightmare Alley a sophisticated noir with a very particular look to it mainly because the director was Guillermo Del Toro, who also directed Pans Labyrinth. Starring Ryan Reynolds, Kate Blanchette and Toni Collette it was the tale of a grifter and con-man working his way up to be a psychic medium and his inevitable downfall. Sounds ghastly? No not at all, the look of it was stunning and I was enthralled by the entire film. This gets four* from me.

The second excellent film viewed at home was The Eyes of Tammy Faye starring Jessica Chastain as Tammy Faye for which she quite rightly won this year’s Oscar. Oh my word, to a Brit that film was mind boggling, truly mind boggling! Religion  as entertainment – what?! Amazing, and an interesting story as well. I highly recommend. Another 4* from me for this film.

We have finished watching four series, (Beck BBC iPlayer), an excellent Swedish detective series with a great cast and good stories with well rounded characters – I find it very enjoyable.  We’ve also reached the half-way mark with Better Call Saul (Netflix) in my eyes one of the best television series ever, and what a shock ending to the episode that was. The second half of this last ever series will start in July – can’t wait! I also finished Life After Life (BBC iPlayer) taken from the book by Kate Atkinson of the same title. It’s the story of Ursula who has an infinite number of lives, yes we see her die over and over again, but it is exquisitely told and feels both sweet and sad at the same time – loved it. And then the fourth series of The Marvellous Mrs Maisel (Netflix) has come to an end. I shall miss the technicolour cinematography and the early 60s vibe but I rather wonder if another series will solve the problem of where exactly is this going? So I love this series but think it needs to end – somehow.

Still watching GentlemanJack (BBC iPlayer). Oh Suranne Jones, what an actor she is. Love the strength and feistiness of this series, just love it. Do you know about Gentleman Jack? This is the story of Anne Lister and Ann Walker and their love story set in the early 19th Century in Yorkshire. They are the first married lesbian couple we know of, this knowledge coming courtesy of the collected diaries of Anne Lister amounting to nearly 4 millions words.  The diaries were written in code and only recently transcribed.  From our present day it is astonishing to see  Ann Lister’s courage and strength in dealing with men as an equal, which she was, but in those days, she could be landowner from the landed gentry but she could not vote and nor, of course, could she marry Ann, but she did, in private church sacrament. Just the best kind of television you could find.

I read a couple of books that were really not up to scratch. One was Nancy Mitford’s first novel, Wigs on the Green, and if you see it don’t bother to pick it up as I thought it ghastly and shallow and nothing like her later books, especially The Pursuit of Love, which is a great read.

However, one book this month has been outstanding and I put it in the highest ranking of all books I’ve read. This is Suite Francaise, by Irene Nemirovsky, which I see the reading of as an experience as well as a brilliant read. Nemirovsky was born in Kiev and left with her parents for France in 1917 during the Russian Revolution.  The book consists of two novellas, the first of which is set around the defeat of France in 1940 and the flight from Paris. The second is the occupation of a small village by German troops. Both the prose and the story lines are perfect and I see her as up there with Tolstoy and  War and Peace. And indeed Nemirovsky saw this as a 1000 page novel made up of five sections depicting France in the time of German occupation. She only completed the two because despite living half her life in France she was arrested by the French police as a stateless Jew and ultimately sent to her death in Auschwitz. Her two children survived and amazingly so did her manuscript, but not until 60 years later was it realised that the manuscript wasn’t a diary but the beginnings of a great novel. It was published in 2004 with huge acclaim and it is a masterpiece. Do read it.

That’s all for now, and while I don’t totally approve of the British royal family (apologies to those who do admire the royal family but I have to be honest, I don’t) nevertheless huge kudos to the Queen, and let’s hope the rain holds off for all those street parties held across the UK to celebrate the Platinum Jubilee. Enjoy the Bank Holidays and the weekend wherever you are.