How are things with you? Good I hope. We’re fine and I’ll say more about my state of mind at the end of the month, but for now, I am going to revisit the major decision we made to move to housing for the over-65s. This has been prompted by someone mentioning they were thinking of downsizing and it triggered so many memories. Not the least the reaction from some of our friends who were astonished – why, they kept saying. And indeed the very thought of downsizing, and even worse, moving to a specifically older persons type of housing, is unthinkable and not something they would ever do. But that’s fine, and actually there are many types of this kind of housing including retirement villages, although the size of our country being what is these are not all that common. But I think also there are many myths about the whole idea of living where we do. I remember after writing about this one commenter said that the very last thing she wanted to do was to sit all day in the communal sitting room. Well, actually, same here, I don’t do that, because after all, we live in our own apartment. There are 51 flats in the block (some 1-bed and some 2-beds) and each has a sitting-room, bathroom and kitchen. But don’t diss the communal sitting-room, because, yes, there is one. I mean, I have no idea what it is like to be a widow and on my own. Does anyone know before it happens?  It may be me that goes first and maybe it won’t (hey this is cheerful, but you know, face facts, we don’t live for ever) but the sitting-room downstairs may be a really great place to have a coffee when you’re feeling you absolutely must talk to someone face-to-face, or get out and see something other than the four walls around you.

On the other hand, will it be different for the cohort of older people that uses IT and social media and thinks nothing of going on Twitter to make a point, uses Facebook to keep up with friends and for those of us who have a blog, replying to commenters who have become, in effect, friends you communicate with sometimes more often than some friends who eschew and shun anything to do with ‘computers’!  I talk to people this way all the time, and it’s lovely. Will we get lonely in the same way that the over-80s do now, who only use their mobile as a phone and do not touch social media?  I’m fascinated by that question and one day I may be able to answer it, or maybe not, it depends …

But of course there are many other variations of housing for older people, including staying put and not moving ever, which is what so many people hope to do.  But here’s the three reasons why we moved:

First, you know it’s sensible. Will you always be able to do the gardening (and great if you can afford a gardener, we looked at our finances and said, no, we can’t).  But I’ve had gardeners and they never quite do it the way you want. Can you live with that? Then there’s the upkeep of the house and its maintenance, a lot of people are D-I-Y enthusiasts, but again how long do you think you can paint the windows and the walls? And then can you/will you be able to manage your house into your age of frailty because that is what ageing is all about. Ageing is not just about retiring and having a jolly time, there is a stage when you cannot do all that much. And by then will you be able to move on your own? Will you be able to pack up your house? Or will it be your children who have to move you? What annoyed me at the time we were making our big decision was that the literature was very much about ‘moving your mother’. I was incensed, had these Housing Associations not thought that some older people can make their own decisions and move of their own volition.

Yes, the second reason we moved earlier than most people think is the ‘right time’ i.e. in your 80s (noooo, that’s too late!) is that I carry a lot of baggage. I had to move my mother into very sheltered housing, as it is called, as she could not manage to live on her own when she became a widow. This was, like ours, a flat she bought, but there was not only a communal sitting room, there was also a restaurant with a cooked midday meal plus an hour’s cleaning every week. This was all factored into the monthly service charge, which was expensive but my careful father had made sure she was financially secure. Anyway, long story short, she disliked the place from the word go and on reflection I think she would have been happier in a care home as she could barely cope with the small flat and needed a huge amount of input from us, her two daughters. And all of that when I had teenagers who also needed me, plus a job in a national project based in London. The consequence of that was I swore I would never ever, ever be a burden to my children. I shared that decision with our kids, so all those years later our children were not in the least bit surprised when we told them we were moving to a Housing Association flat for the over-65s.

Finally, did you realise that these flats/apartments are really inexpensive. This is because they are quite niche, and also not all that popular! Our Estate Agent told us that the majority of people looking at the flats are daughters who say, oh, this is nice, then they bring their mother round to see the flat, and the verdict is usually, no thanks! For us though the cost was the key to our decision-making as we wanted to move back to the city from our much smaller town where we were living and there was quite a difference in the price of housing between the two. Also having acted as the Bank of Mum and Dad we were short of funds to dip into, a Housing Association flat was just the ticket and easily affordable. Mind you, don’t forget the monthly service charge – you have to factor that in to your budget and decide whether you can afford to pay this.

It all made sense. Yes, we moved again as the first flat wasn’t quite right (too far from the city centre) but this one is the bees knees. I feel such a sense relief when I look out of the window knowing that the small shops and the sea are just a minute away and that there are numerous buses to take us to the city centre within minutes. Gosh, not been there for some time, sadly.

If I have one regret it is that I haven’t got an outdoor space. Ah ha, you might think, that’s the fatal flaw of flat living, but no, all our decisions were made pre-pandemic and based on us being out and about in the city and beyond. It’s not the actual garden and the gardening I miss it is that I cannot entertain anyone at all in our flat.  We were going to be so very sociable and entertain friends and family all the time. That regret will disappear once we get out of the pandemic, sometime next year I hope and like you, I cannot wait for that.

This was taken soon after we moved. Like so many of these flats there were those old-fashioned storage heaters in place. They were removed and we’ve now painted that area and have installed the latest electrical radiators to heat our flat, plus there’s a different configuration of furniture with a dining table by the balcony door which doubles as my desk. 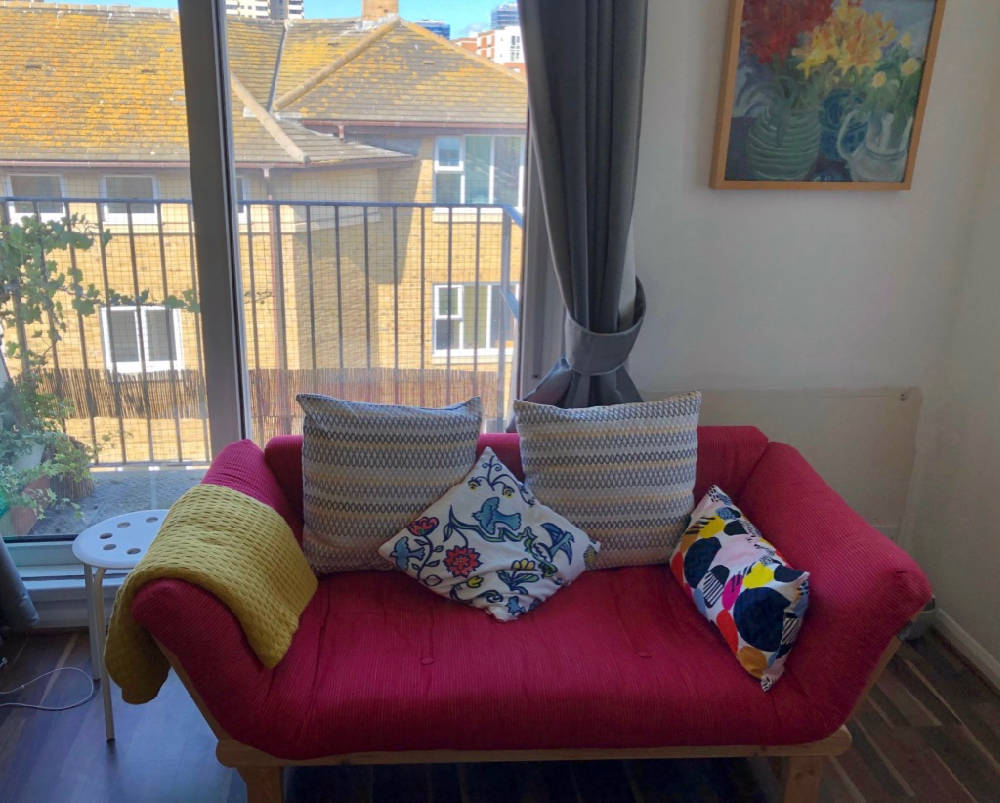 Our hallway at night. 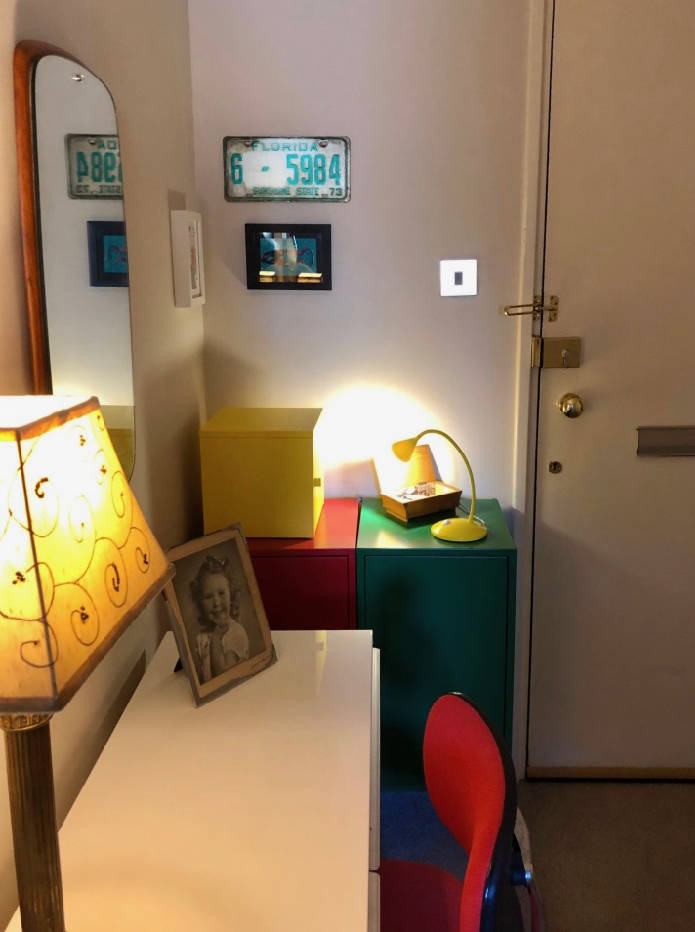 I got that car number plate in 1999 when we made a trip to the States. I found it in a kind of antique/thrift store in Palm Springs. I’ve always got my eyes peeled for a bargain! And here’s a photo you’ve seen quite recently.. 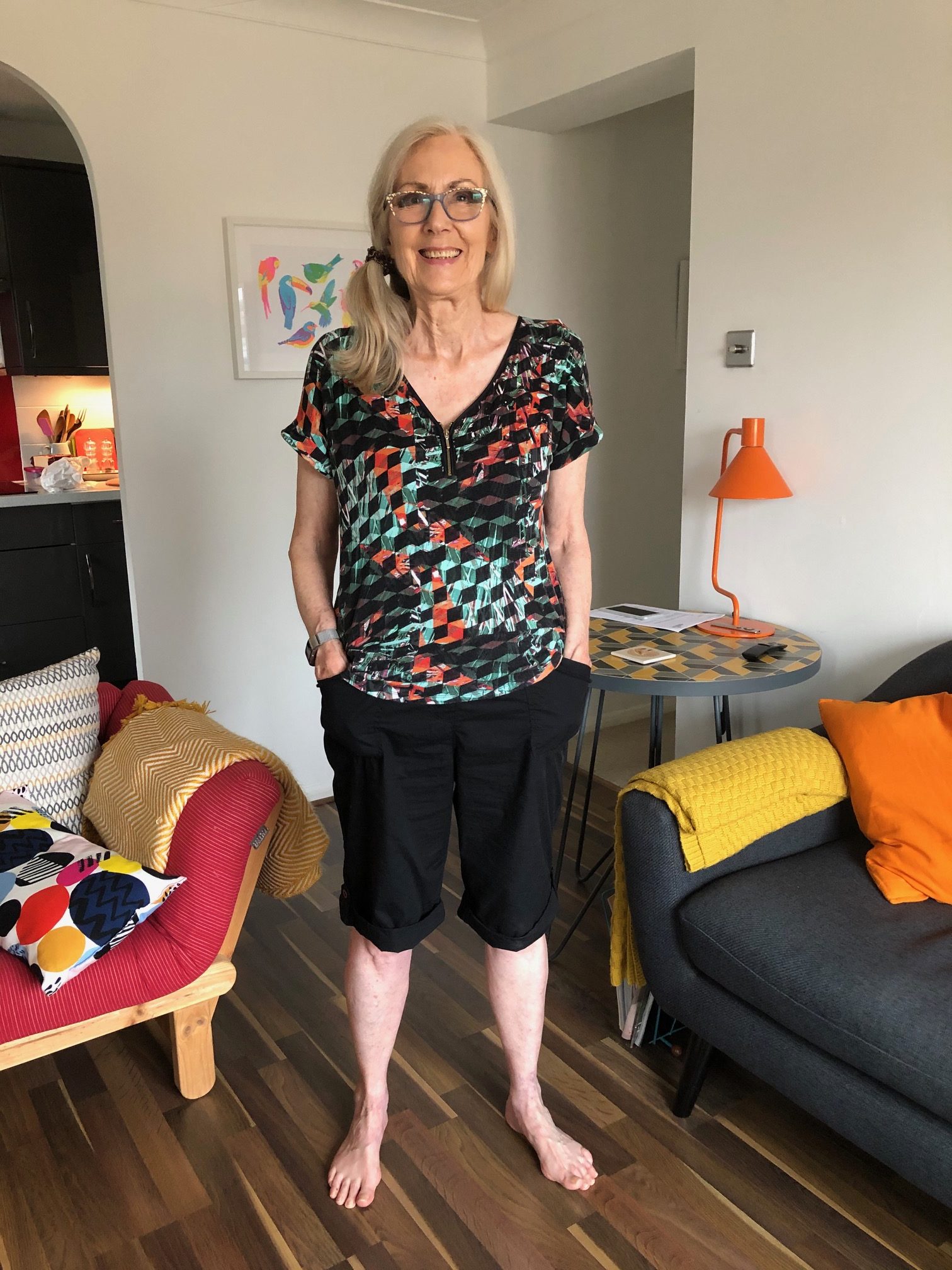 I’ve put it back in again as the beginning of this week it’s been the kind of weather to get out the shorts and wear them out and and about. Thankfully I hadn’t put them away!  I also wore the green skirt again.

Underneath the charity shop top I wore a lovely little pale green vest – sorry didn’t take a photo of it! The shoes are not from a charity shop but were bought years ago. 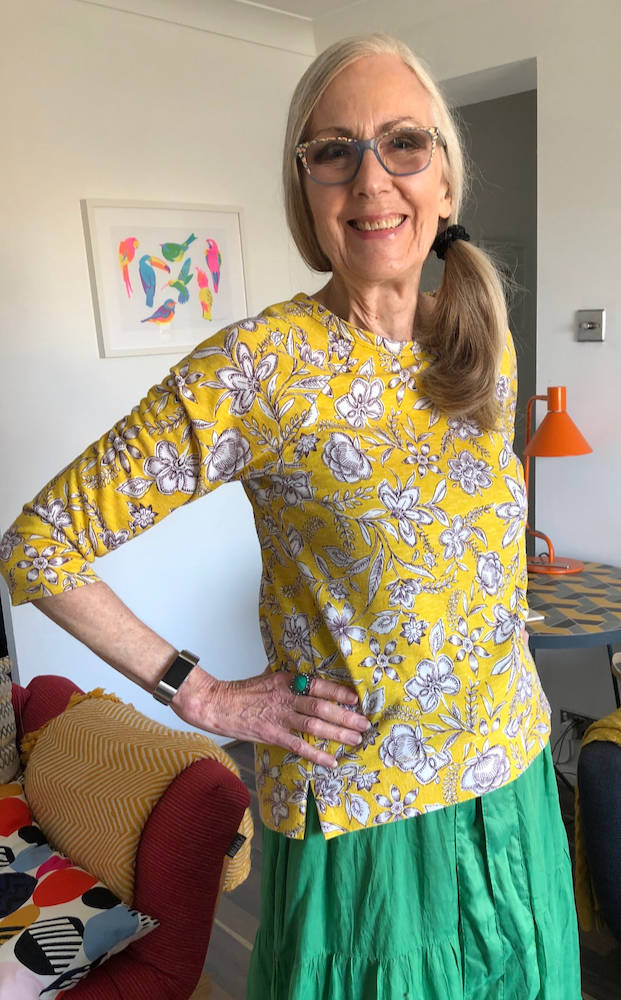 I do love that charity shop ring and try to wear as often as possible. As you can see I love bold primary colours.

Here’s another moody shot of the seascape that never fails to lift my spirits. 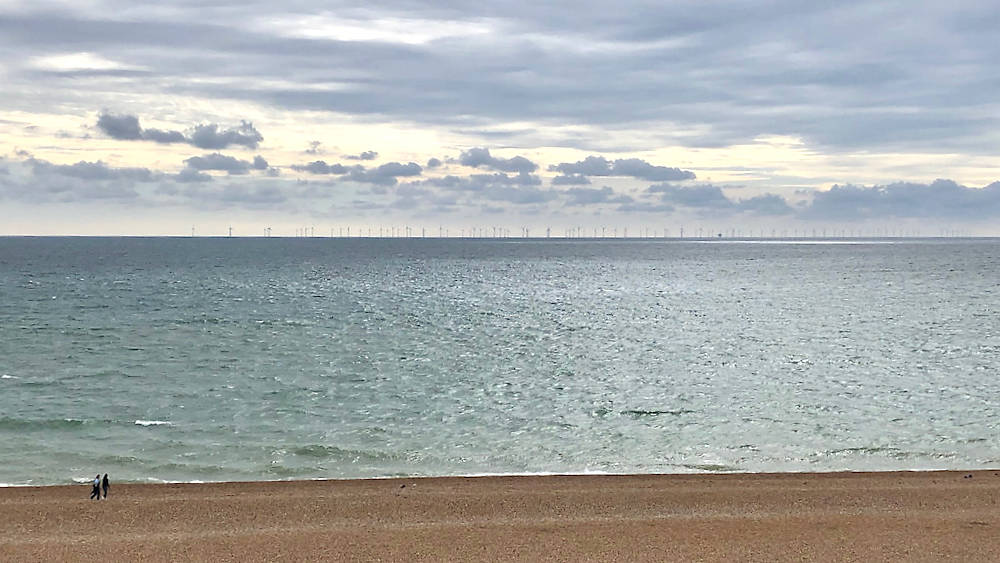 You all take care. With love, Penny, the Frugalfashionshopper

P.S. This post is a few days overdue but I haven’t been idle as there is another post up on My Other Blog.  It’s not about the pandemic but about Brexit and you can find it by clicking on the icon on the side of this if reading on a PC or Mac, and at the end if reading on your phone. Be warned, I don’t mince my words as the saying goes, so do not read if you support and/or like this government.

27 thoughts on “Decisions, decisions for a move (or two) that was right for us!”