As most of you know I’m down-sizing big-time to a flat (or apartment, as they say over the pond).  It will have 2-bedrooms, a living area and a small kitchen and bathroom. And no garden.

I’m ready for this.  I wasn’t at 60 or 65, or even, 68, but at 70 I am.  And it’s nothing to do with being ‘old’.  It is, however, an acceptance that actually I could do with less back-breaking gardening (I shall have my daughter’s garden to do if I feel the need for bending over and pulling out the weeds) and also, seriously I could do with less housework.  And no I don’t want to employ some ‘help’ or not yet, anyway.

But look at it this way.  We are moving back to a buzzy, wacky city with all that city-life brings: the coffee shops; the shops; the theatre; the museum; the cinemas (ah yes, cinemas within walking distance, oh bliss).  And proximity to a main-line station that’ll get me to London in a trice. Won’t it be noisy, said someone anxiously to me.  Oh, please, yes!  I want noise and buzz. I choose life!   Have you ever sat up on the 1st floor of a coffee shop in the North Laines in Brighton and watched people walking past in the street below?  Sometimes it’s as though you’re watching a crowd of extras from Star Wars – I love that!

And incidentally, this flat (and I have found one, but nothing is fixed yet, because we haven’t sold). Yes, this flat happens to be in a retirement block (which isn’t institutional, it’s just what we Brits call a condo).  Well, what about thinking about ageing rather than sticking one’s head in the sand?  Hmm?  (Read the last two sentences with a bit of an upward inflection) More about this in another post.  Anyway, I know it wouldn’t be for everyone – but it is for me and Mr Frugalfashionshopper.

So, to decluttering! And I don’t mean just clothes.

Recently I got rid of a lot of books that I’ve had since studying for my degree.  And even though I got this degree at the ripe old age of 40, that’s still 30 years ago.  And do I read these political philosophy books?  No I don’t. So, they’re out, they’re gone.  And novels?  Why keep them?  They’ve also gone.

I know people who’ll be horrified that I’ve got rid of books.  And I agree, books don’t necessarily have to be read all the time, instead they kind of tell you who you are.  They sit on shelves and speak not only to you, but to others, and say this person has read these books.  Now.  Actually.  I think there’s a tiny bit of a peacock display thing going on here. I’ve been there, I did that once, but now, no, there won’t be the space.

However, we’re moving to a 2-bed apartment, and the largest room is supposedly the main bedroom.  Not in our case.  We shall entertain in this room and make it our sitting room with all our A/V, streaming, listening, music equipment plus a big screen. And what was supposed to be our sitting room (a smaller room) will be our combined study, and that’s where my books will go.  Yes, I do have books that I’ll keep.  The ones on India and the Indian Army (I’ll tell you why I’m interested in India another time) my fashion books and the ones on current political issues, they’ll go there.  And novels – they’ll come in and then they’ll go out again to a charity shop.

So, I’m good at decluttering books.  And I’ve got rid of quite a lot extraneous ‘stuff’, particularly excess kitchenware; bowls and pretty plates that I’ve picked up in charity shops but never used.  As for clothes, I’ve cleared out a whole cupboard’s worth and our remaining clothes, plus coats, are now in a wardrobe that’s the same measurement as the built-in wardrobe we intend to construct in the new flat.

The easiest clothes to discard were my charity shop clothes.  The clothes I have difficulty with are the ones that cost a certain amount, as in, were full price.  These are going, albeit at a slower pace.  The cruise frocks will be kept, btw, because i) I love them and ii) I fully intend to wear them again. This cruise frock below is a good example of a dress that is not worn often but will, definitely, be worn again.

Yes, my criteria for getting rid of clothes is, do I wear this item?  And, will I wear it in the future?  If the answer is in the negative, why on earth am I keeping it?

But then there are some clothes that I never wear that I can’t quite bring myself to throw out.

First, is my wedding dress, which I bought off-the-peg for not very much in 1974. ( I believe it’s different now and thousands are spent on this item.)  As you can see, even  then I was determined to be different and didn’t wear a traditional white dress!! 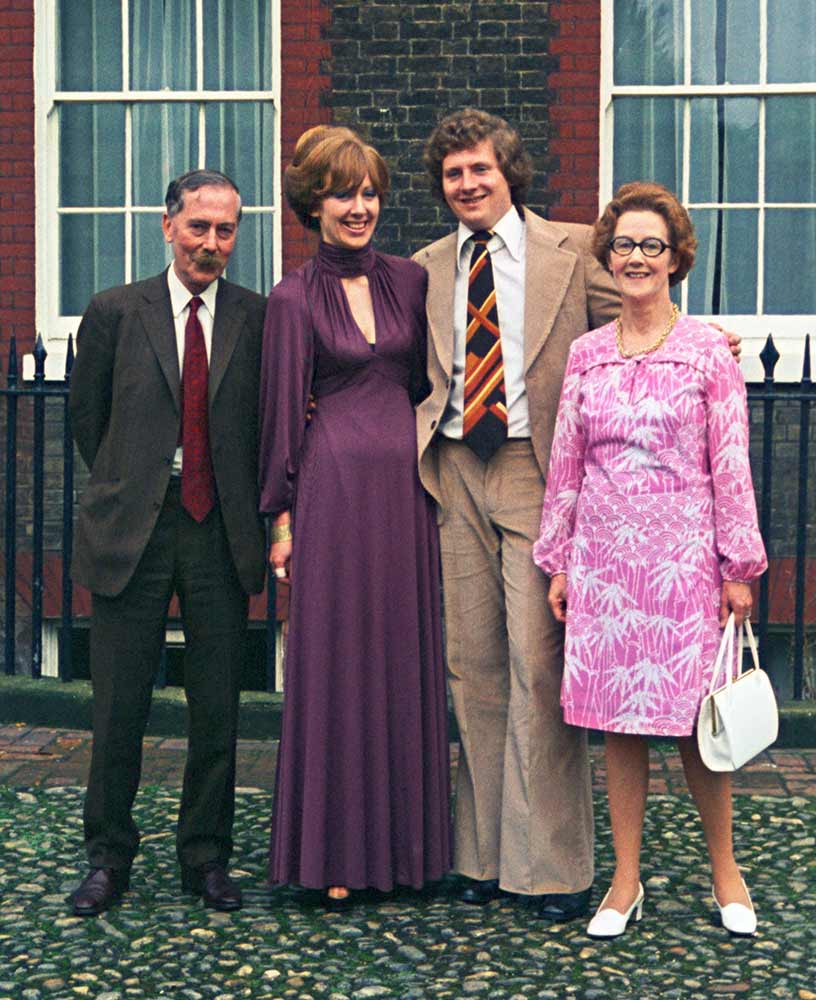 Don’t you love my mother’s pink crimpelene dress, and what about the nice touch of my petticoat revealed at my cleavage – sigh.  It was a feature in every photo!

Anyway, I’ve kept the dress hanging in the back of my wardrobe for ever.  And I can still get into it – just. The pic below was taken last year and you can see my boobs have grown with age and don’t really fit into the space provided!!! Also I should be wearing heels.  Actually on my wedding day I was wearing platforms with heels – not possible now with my weak ankles. 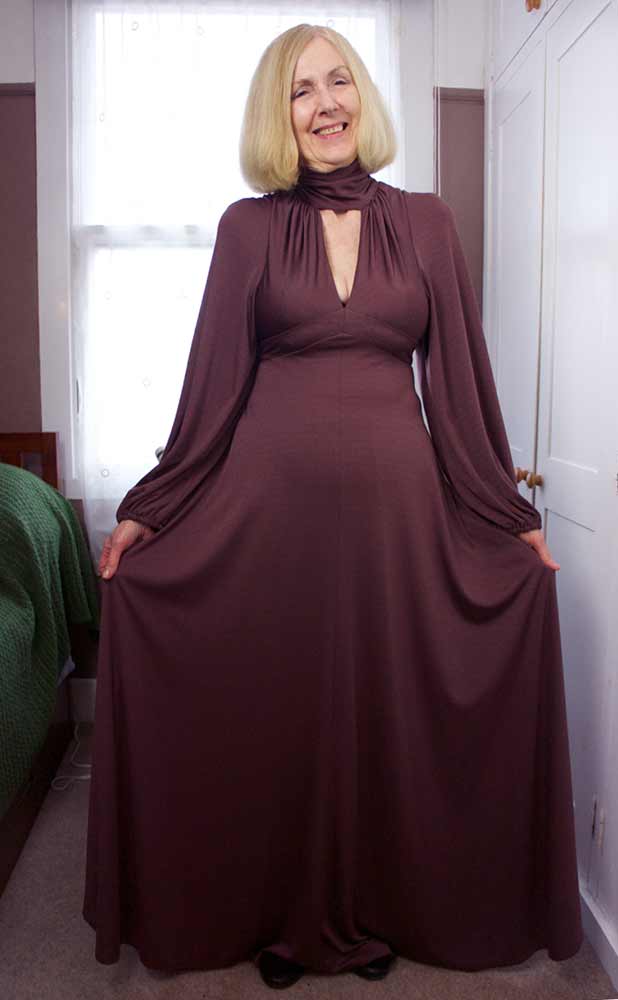 Then there’s a 1980s dress and jacket, I simply can’t throw out.  The dress looks as though it’s made for someone very slim but the material is quite stretchy.    The label says ‘Made in England’.  That alone says it was made some time ago! 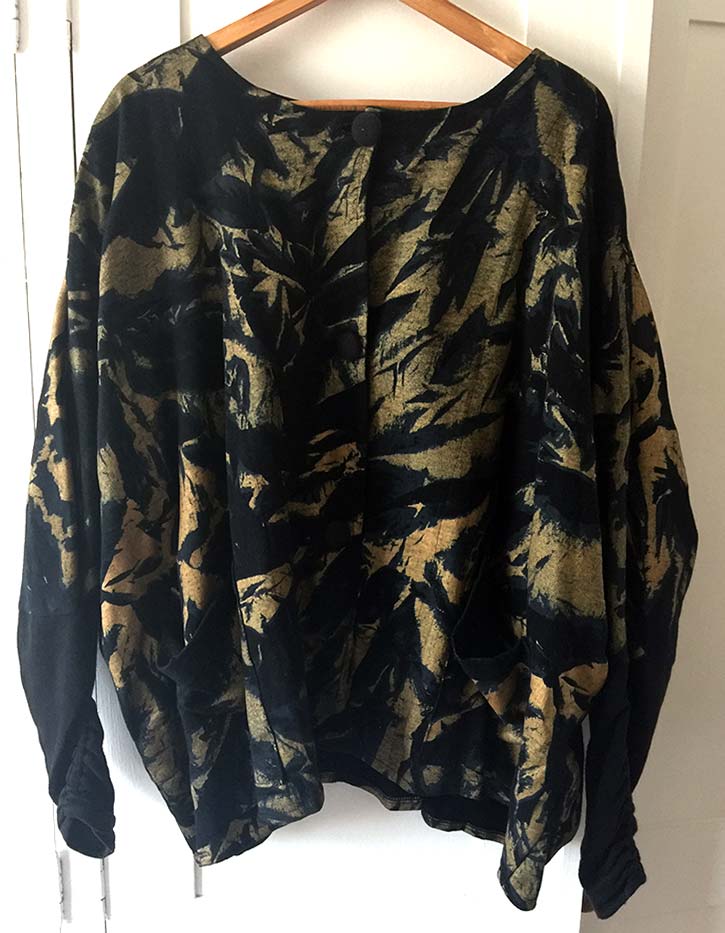 I never wear this outfit now, but I can’t throw it out and I can’t say why, except that it tells me that at a particular time in my life I wore this outfit (out and about in Brighton actually) and felt good in it. Maybe I should try the dress on again.

And the oldest piece of clothing I possess is never to be thrown away as it’s over a 100-years old and is my grandfather’s mess jacket.  I haven’t found an occasion to wear it yet, but maybe in Brighton I will! 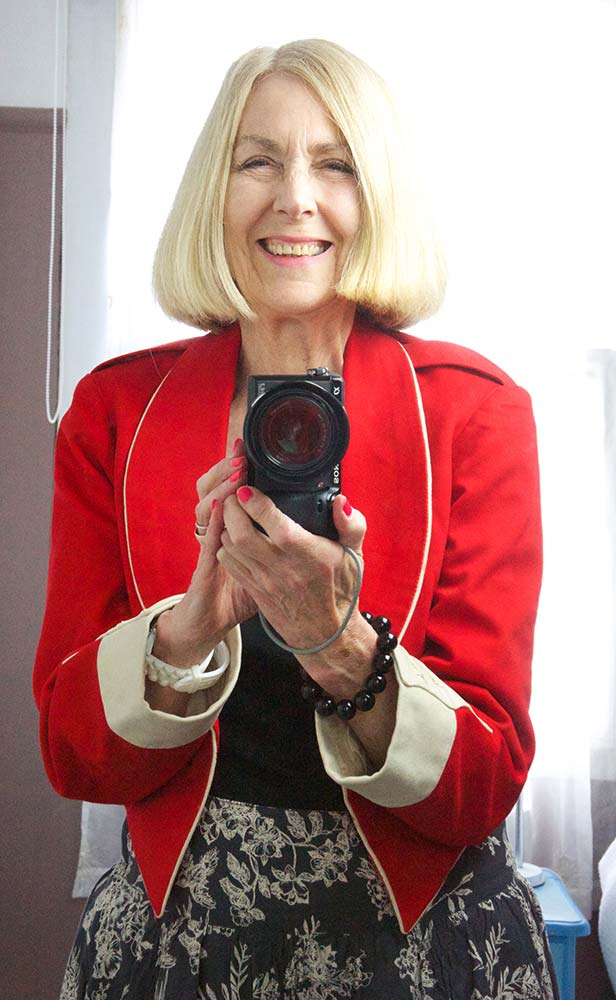 I don’t have many of these ‘I cannot throw this out’ type of clothes, so for the time being, they’re in the back of the wardrobe where they’ve always been, and will continue to be, I guess.

Do you have items of clothing you’re hanging on to, despite not wearing them for years?  If so, do tell me what they are!