I love the blogosphere and the community of blogging women writing for us about all sorts and not just fashion.  I always aim to read as many as I can, and I do it for pleasure – it’s not a chore.  And no, it doesn’t take up a huge amount of my time – less than an hour in the morning. There are those that are skimmed and quickly deleted, but there are blogs full of great writing.  Just recently three posts caught my eye: one is Catherine of Atypical60 who writes about being your own style icon (I shall return to this in my next post); and then there’s Sue Burpee of High Heels in the Wilderness (don’t you just love that title) who’s written about Our Curated Lives, and Eloise in This is Sixty who asks what will happen to our instagramed photos in the future.

The latter two blog posts are highly relevant, as never before have so many presented an image, a ‘self’ to the world that could, at first glance, appear unnaturally glossy and glam.  Do you look at and/or use Instagram?  Phew, there’s a lot of posing going on there! I find it quite fun and I do look at the images, but for me, I’m not going to take it seriously.  I tend to put up the occasional rather bad selfie, mainly because I’m not all that good at taking selfies, and partly because I’m in rebellion against the surface smoothness and apparent jolliness of people’s presented lives and their clothes.  However, I still aim to improve – a technical thing is not going to defeat me!

Actually, I think to a certain extent we all curate and present an image – remember photo albums? I don’t think there’s that much difference between these albums, and the negatives and printed photos we discarded before the chosen few went in, and Instagram and the dozens that are taken before one is put up. It’s just that it’s a much quicker process (remember the anticipation waiting and then getting your developed photos from the chemist!) and of course, everybody is having a look.  But we don’t have to participate, and, as I said, I’ve chosen to do so minimally. But here’s a thought, there’s a huge question hanging over all this posting of pics.  And it’s not about the issue of should we march backwards and not have these things at all (not me, I embrace social media) but what happens in 60-100 years time?  How will people keep photos for future generations?   How will your great-grandchildren access all these photographs? I think, albums will still have to be created for them, and Mr Frugalfashionshopper is doing that right now for our future grandchildren and great-grandchildren. But don’t forget social scientists who just like looking at records, including photographs, they will need the photos of the 21st Century – actually there’s a great deal more to be said about this but I won’t here.

Of course, the pics on this blog are also curated.  Some clothes that I wear for cleaning, cooking, and my office days, will never feature here.  But I will share with you a thrifted skirt I wear over and over again – it’s my go-to skirt for a quick trip into town. 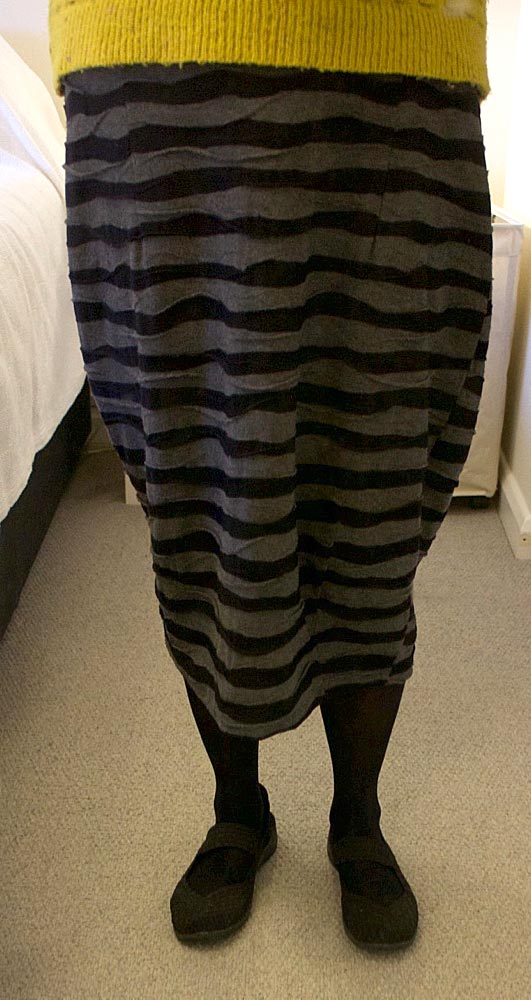 It’s a mid-length tulip skirt and so comfortable. Here it is with a yellow top – my favourite colour.

The skirt was bought for next-to-nothing about two years ago and the top was bought new (3-years ago) from Urban Outfitters, which is a store I simply love for the buzz more than anything.  Just an aside here, where I was living before, several people said they never went to Brighton. OK, they gave a variety of reasons, but one said this was because Brighton was a place for the ‘young’ (she was 5 years younger than me!) Look, when I go to Urban Outfitters I must be the oldest person there.  But I simply do not acknowledge certain shops, or towns for that matter, as being for the young.  Never, ever, feel that a shop is not for you. You go in, you look, you buy, and you wear what you damn well, please!

Anyway, it’s the beginning of the month and time for a hat!

Here’s close-up of the hat, which btw, was bought new at, yes, Urban Outfitters! 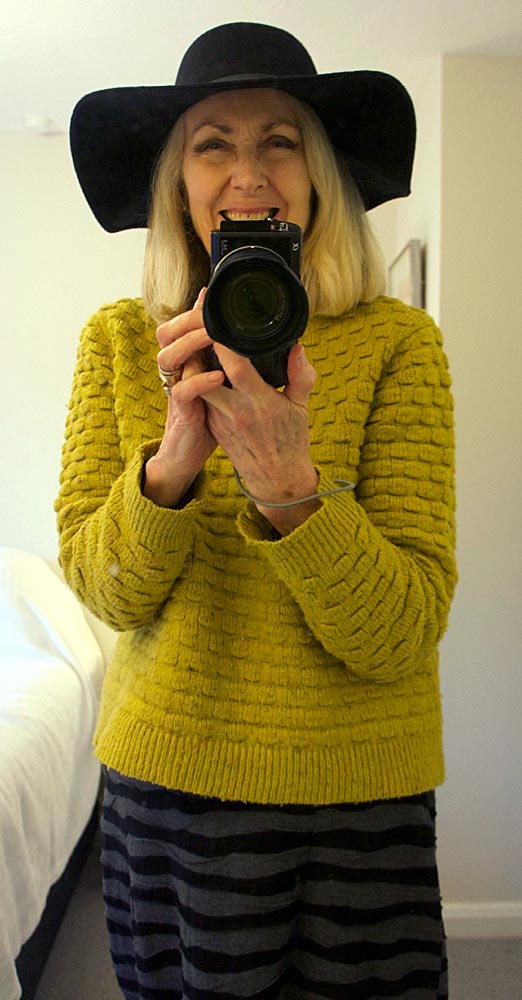 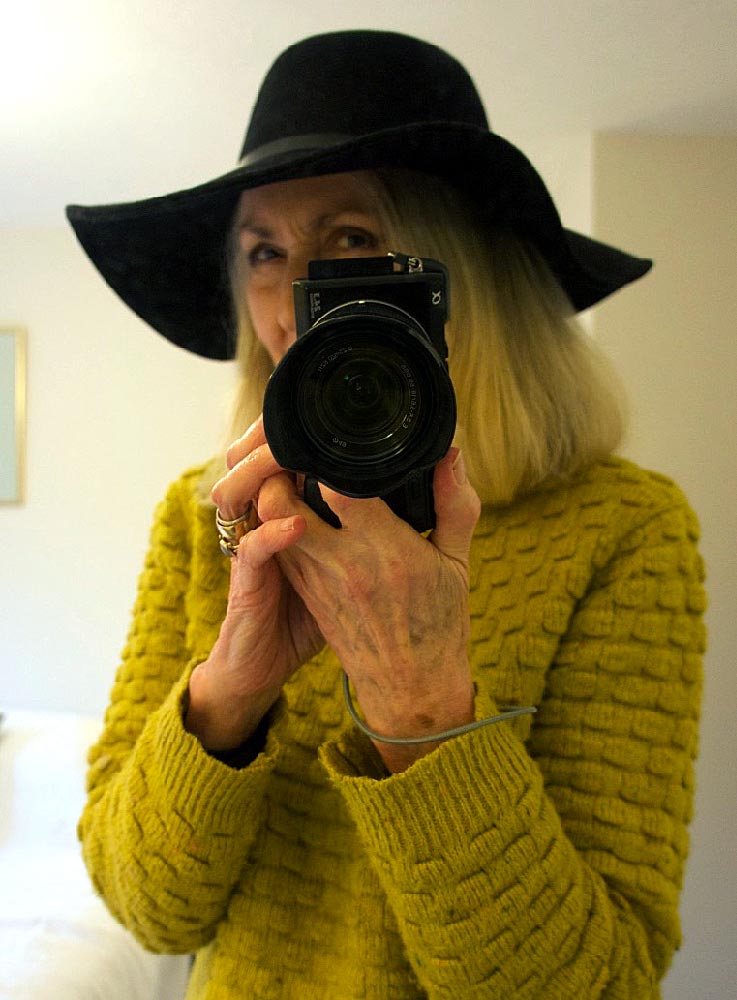 A confession. I do try to be frugal, but I’m not quite as good as I was, and that’s perhaps because I shop more often in Brighton.  Also prices in charity shops are rising, but, I will buy charity shop clothes at a higher price if I consider it warrants that price.  Just lately I seem to be on a coat-buying spree, although, my excuse is that I’d had some coats for many years, and I needed to replace them. Furthermore, I’m going up to London twice this month, and I promise you some street shots (and others, more about that soon) but, I thought, I really do need another London coat.

And here it is.

Now this shot above makes it look enormous and rather bulky, but this is partly due to the angle of the pic, and partly due to something I’m wearing under the coat (see below).  In reality, the coat has an amazing cut and flow to it with a lovely frontage and collar. So here below is a shot that I should also have discarded (eyes shut – blast!) but is in this post as it shows the cut of the coat well.

I’m afraid it cost £30, from a charity shop (!) but it has a German label of a manufacturer that no longer exists, so I suppose it was seen as ‘vintage’. The coat is also warm, as it’s all wool, and it sways and flounces as you walk. Definitely an up-market London coat.

I have a big reveal for you! Beneath the coat I have not just the OOTD, it is the outfit of the year!  And I’ll be showing it to you in my next post.

This week I’ll be sharing with Judith’s Hat Attack at Style Crone, Terri’s 2nd Loved 1st Friday linkup at Meadowtree Style, Patti’s Visible Monday at Not Dead Yet Style, Catherine’s iwillwearwhatilike session at Not Dressed as Lamb, Nicole of High Latitude Style and Nancy’s Fancy Friday linkup at Nancy’s Fashion Style.  All have icons on the right or at the bottom if reading this on a phone 🙂

41 thoughts on “Curating the look, curating our lives”