This cruise was, for us, quite a different experience from our other cruises, mainly because it was an American cruise line.  I mean, first and foremost, we felt as though we were the only Brits on the ship, which, btw, we loved!  But it was a big, big ship (we won’t go on one that size again).  And because of its size it had many restaurants, the majority of which we tried out.

What we didn’t like was the main dining-room where people dressed up on Gala nights. There was just something about it that made us feel ill at ease.  We went once and that was it.  Here’s a little video of that occasion – my birthday!

As ever the staff were lovely and made the whole cruise a delightful experience. 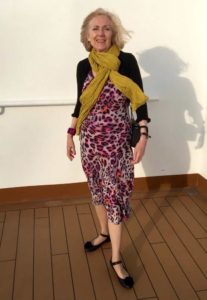 And this is me on my birthday outside on deck – it was a bit windy to say the least!

But this was very different to our usual experience of cruises, where there’s just one main dining room with one sitting, with me dressing up practically every night.

So instead of gong to the dining-room we went to a fusion restaurant (twice), an Italian restaurant (also twice), a New York pizza place, and Dive In by the pool where we had excellent burger and chips. And more often, the buffet area (called the Market Lido) which was actually so much better than the dining-room because of its floor to ceiling windows high above the water-line. 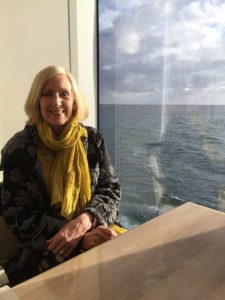 We did try to get to one Gala night, but as the dining-room was on Deck 2 and it was a bit of a lumpy sea, I took one look out of the dining-room window, felt as though the sea was practically at the level of our table, and nearly threw up!

It was much, much better to eat higher up and away from all that.  Take a good look at the sea in the pic here.  This is Deck 7.  Now just imagine that sea on Deck 2 with a lot of movement of the rolling kind, plus a Force 7 wind.  I admit to not being that good a sailor, but the dining-room was far too near the sea for me!

Btw, I am wearing one of my cruise frocks, but you wouldn’t know it as I’m wearing two cardigans over it – even in the Market Lido it was too cool to bare my arms! 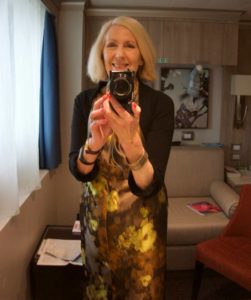 I was keeping my amazing Masato dress for at least one of the 3 Gala nights (we didn’t go to any). Here’s me in the cabin getting ready for one of them, and note the black bolero cardi, which was an absolute necessity!

But in the end I wore it twice, once in Tamarind (the fusion restaurant) and again in the Italian restaurant.

Here in this pic below I’m putting the dress on for a second time.  Umm, note the hair.  What a disaster!  I thought I’d treat myself, so what did the hairdresser do? Gave me a Shirley Temple type hairstyle – not suitable in my eyes, and it didn’t wear off well, either.  So I washed it out the next day – what a waste of money! 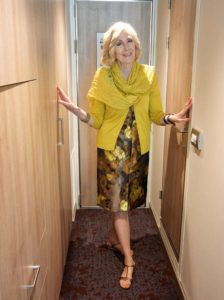 So, what is my verdict on not being frugal and instead getting a bespoke dress!  First of all, you do feel special.  Masato really cares for his clients and gives very personal attention to your wishes and needs.  But I also feel that bespoke clothing is a very ethical and carbon neutral way to wear clothes.  Because think about it – this dress has been handmade in England.  The material is just such an out-of-this-world heavy satin and you feel amazing walking around in it.  Even better is that I have the coat to go with it, which I bought 18 months ago.  So I shall look out for a suitable garden party to wear the whole ensemble – see below for another pic of the dress and me celebrating entering my 8th decade! 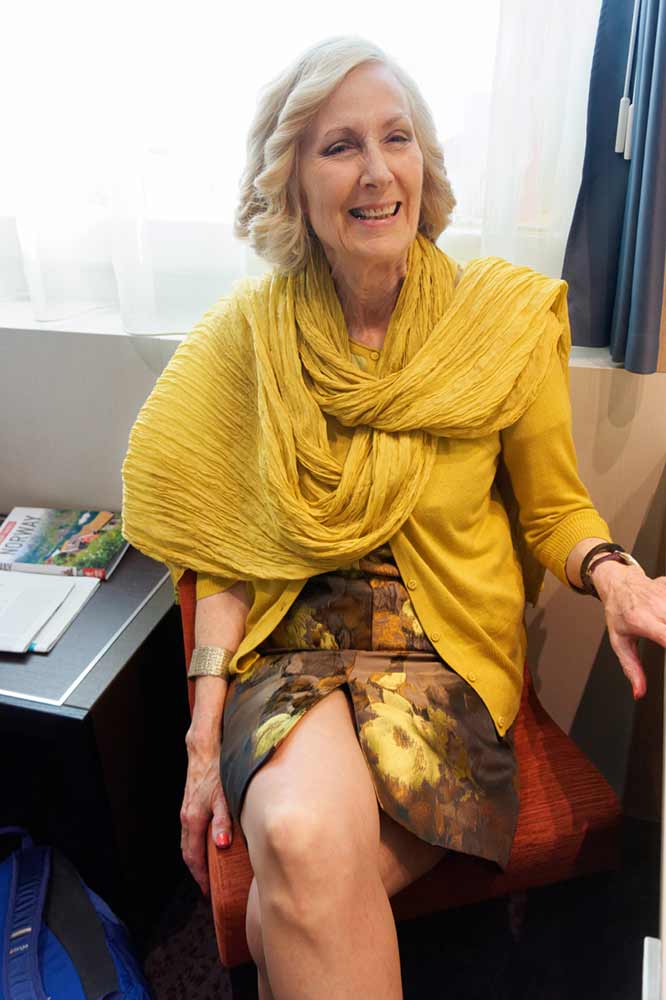 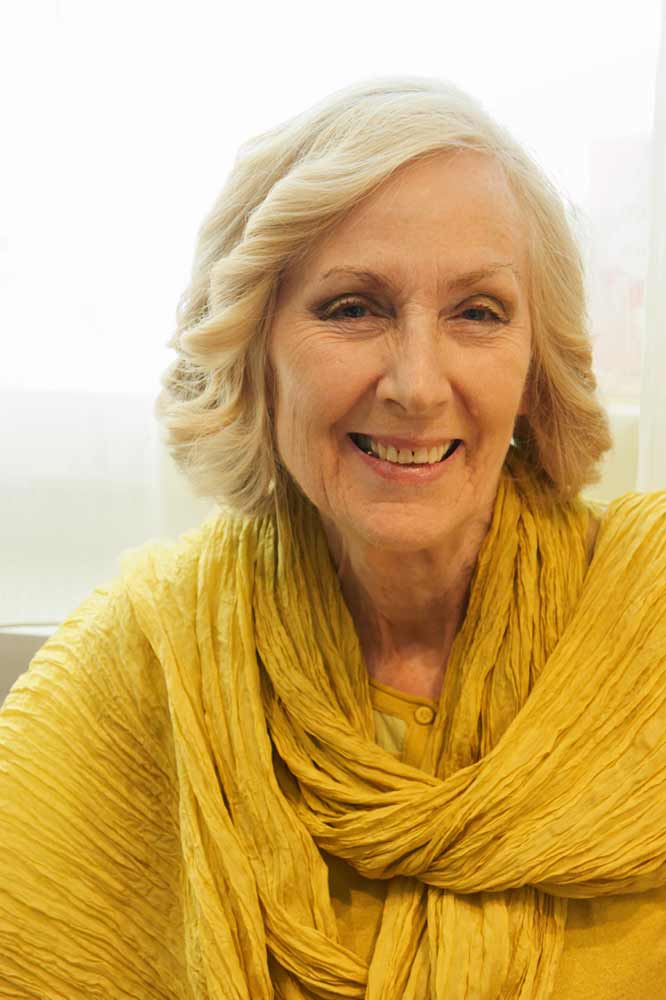 And this is why I like cruising in the north. 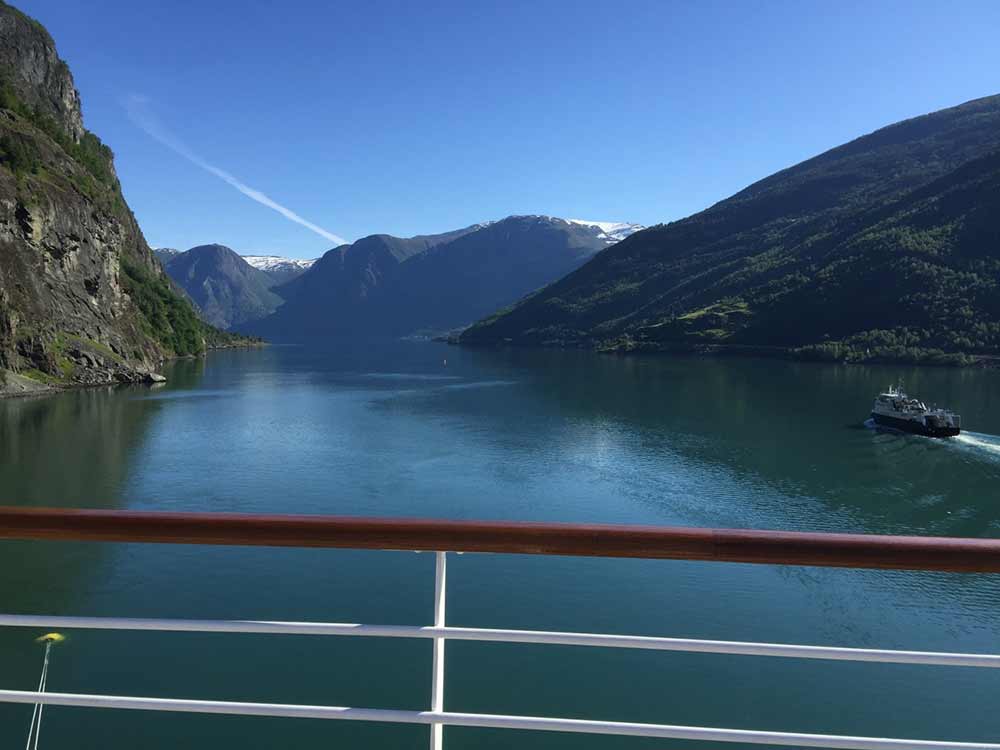 And a final pic of Norway. 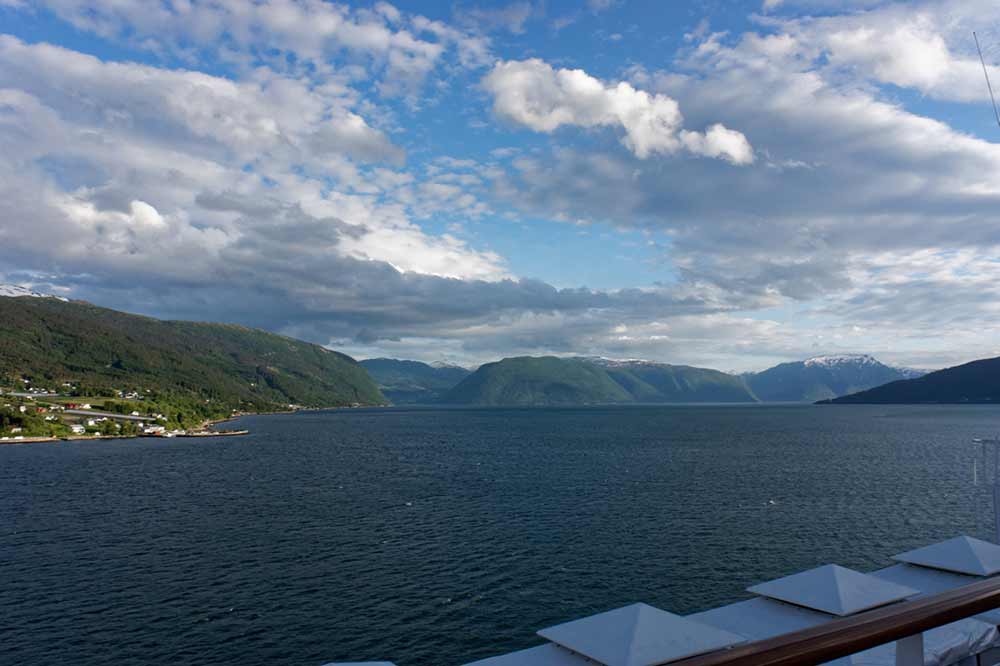 That’s all for now, but I’ll be posting the June film night outfit tomorrow as there are only 30 days in June and I must squeeze it in!

P.S. Linking up with Catherine and her weekly #iwillwearwhatilike session.