Normal service is resumed (although there will be a post on, you know, on my other blog by the end of the week).

Soooo, how was my cruise?  Actually it was fabulous, not totally perfect, but hey that’s life.  Did you read my last post?  Because one excellent part of the cruise was talking to loads of Americans.  In fact, it was like having a foreign holiday twice over as we met only one other British couple on board our ship.  And did politics come up?  Yes, it did!  But go back to my last post for that.

So, the clothes.  Did I take the right or the wrong clothes on this trip?  Actually, I should have taken twice as many woolly cardigans and half the pretty frocks, because it’s cold up there in the north and inside the air con was pretty fierce.  And what’s more I think the ship is destined for Florida, the Everglades and the Caribbean, as no matter what the weather was outside you were constantly offered iced water and iced tea, which, btw, as a Brit, was a new experience.  No, not had iced tea before, and thank you, but I think it tastes of nothing.  Glad to say that I could get a decent cup of tea because there was a large display of teabags at the tea and coffee station (with loads of teas that I wouldn’t touch with a bargepole) but on the side of this station, looking a bit lost and as though it was just an afterthought, was always a big cardboard box of the very British PG Tips – gosh, thanks, and phew!

But let’s start at the very beginning.  Got stuck in Gatwick for 6 hours going (fog in the channel, I think) so here I am wearing my new charity shop faux leather jacket bought for just £6.99. 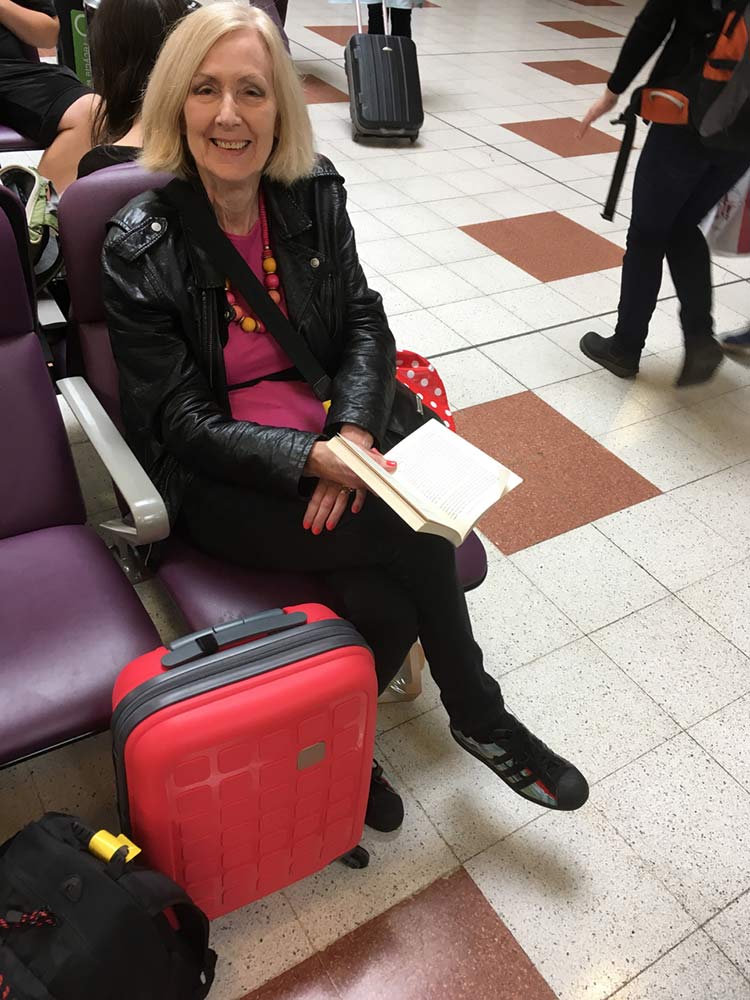 I’d been searching for a more biker-looking leather jacket and finally found one.  I’ll feature it another time so you can see the details. The jacket is worn with a charity shop T-shirt, plus my wonderful Adidas shoes and Primark skinny jeans.

We stayed overnight in Amsterdam and here we are eating our evening meal. 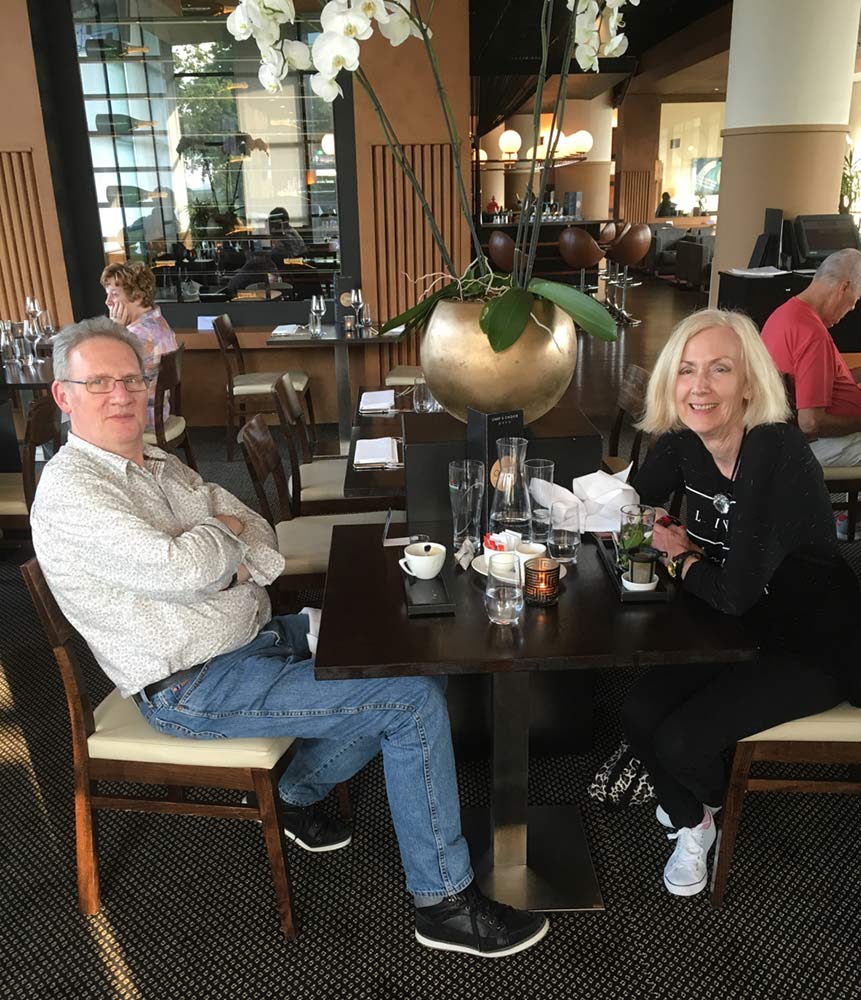 This is an expensive restaurant, but I’m wearing a cheap Peacocks T-shirt (the one that says Live in the Moment), Peacock’s shoes (at £10) and Tesco’s jeggings – just saying this because you don’t have to spend to look good (actually, I felt good in these clothes and that’s the point). 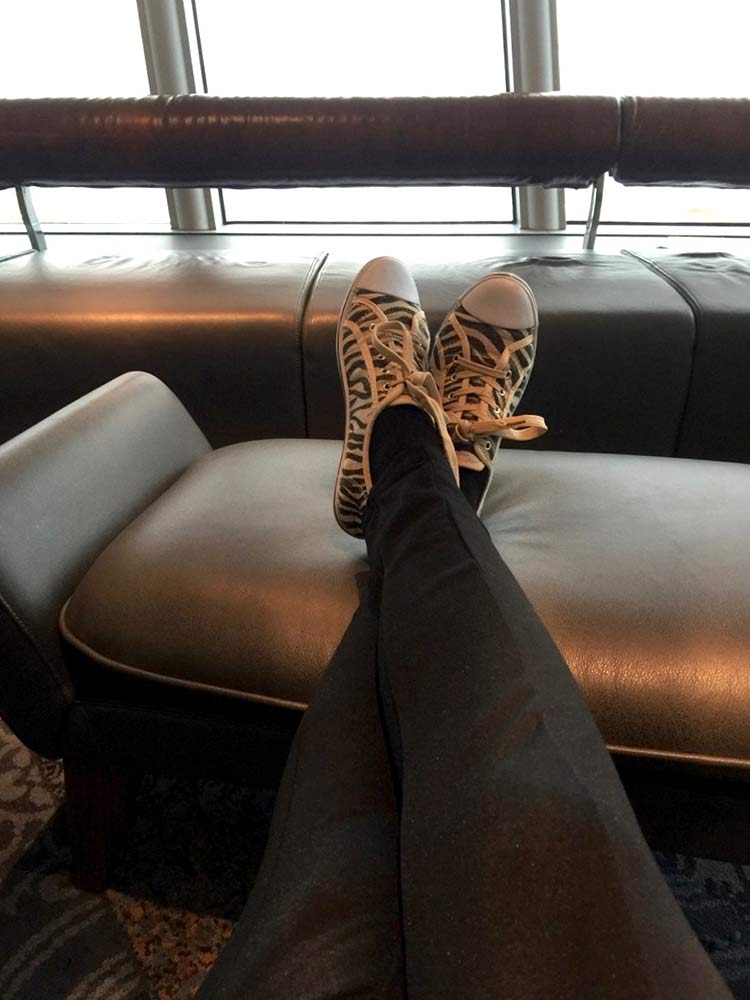 Once on board we did a lot of this.  Those are my 4-year-old cruise decks which I’m going to retire as the soles are worn out now.  Because why?   OK, according to my fitbit, the amount we walked in this ship doubled from my normal fairly sedentary total of around 7,000 steps to way over 10,000 steps every day, even more on port days.   This was because our cabin on Deck 7 was at the end of a corridor and then up two floors to the restaurant that we used.  But on port days it was down to Deck 1 to get out, and, reader, on boarding ship at the end of the day it was up 7 decks to our cabin and we did not get the lift.

Anyway, I brought with me two extra thick woolly cardigans.  One was for the evening, and this one below was for occasional daywear.   Note in this pic I wore it over a bra and vest, plus a blouse and a thin cardigan.  We’re leaving Amsterdam and I’m cold!  And I’d have been easy to identify if we’d met any of the lovely Americans we spoke to again (we never did, it was a big, big ship) as I wore this stripey hooded cardi every single day! 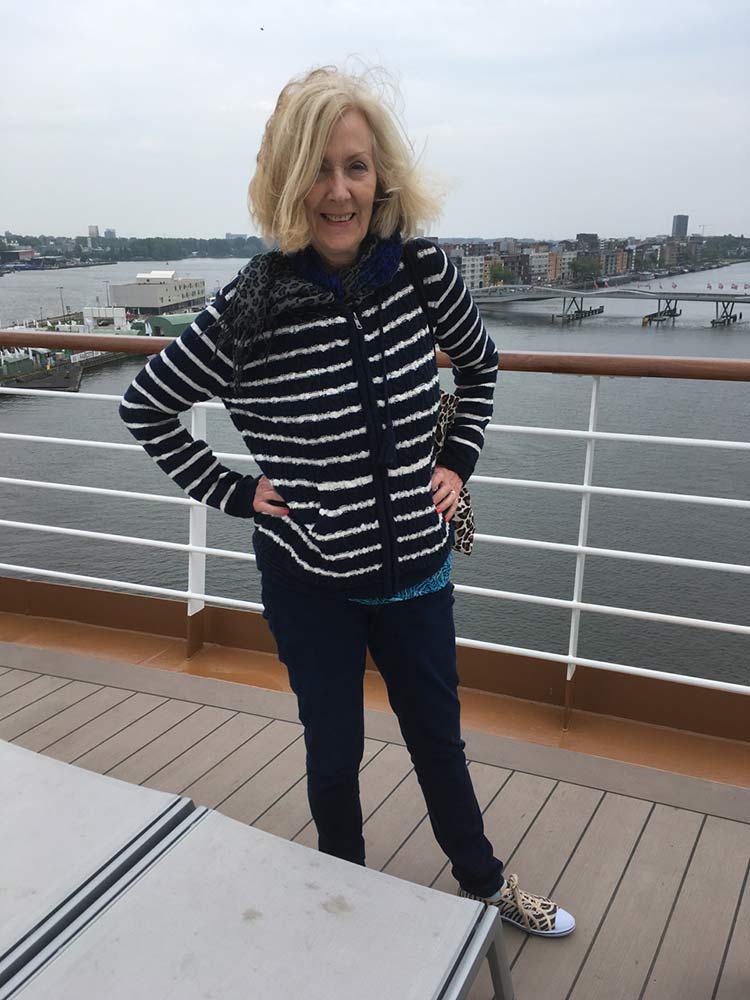 Actually, we did have one hot sunny day (and it was the only one) on our first port of call (Edjfjord). 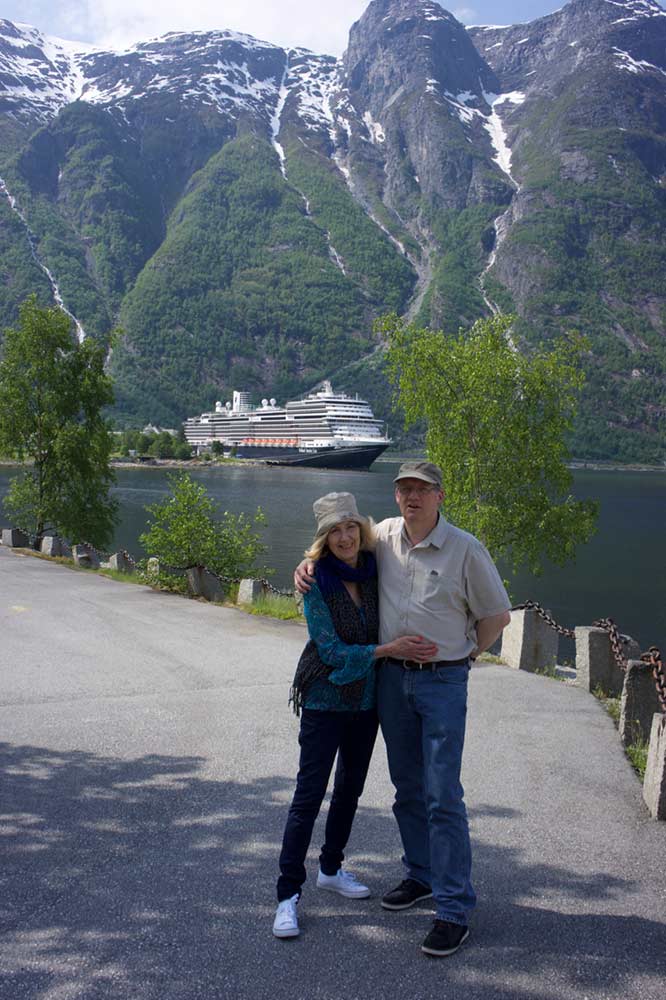 I’m wearing a hat with my long-sleeved cruise blouse for protection from a very hot sun!  Note the size of the ship (it takes 2500 passengers) and the fjords towering above it – do you see why I love Norway?

I noticed that the American cruisers wore hats a lot but, without exception, they were of the baseball kind.  I took two hats and acquired two more (they’ll be featured in the monthly #hatattack sessions).  This is my rain hat, which was very necessary at our second port, Bergen. 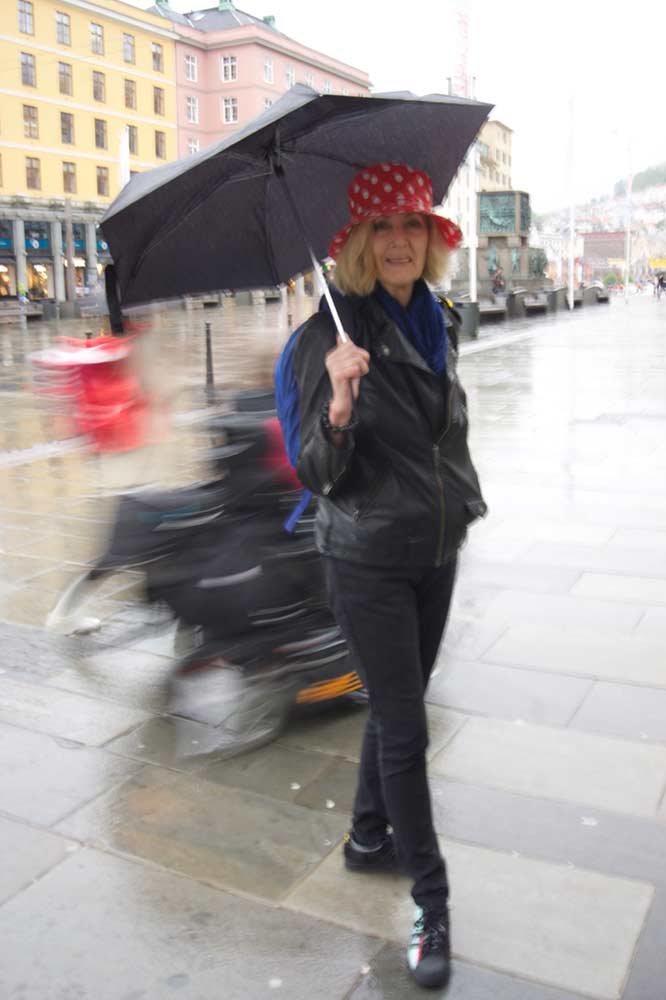 That’s a speedy wheelchair, btw, not a bike!  I felt sorry for the cruisers who were new to Bergen.  It’s such a lovely city but, the clouds came down and it poured with rain all day long so going up the funicular, something you must do when you visit Bergen, was not an option.  Such a shame.  Here’s a pic of me four years ago, having gone up the funicular. 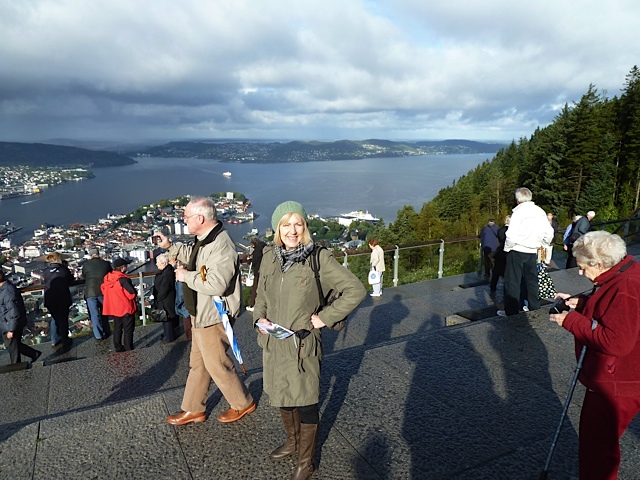 It makes such a difference when the sun shines!  Four years on I still wear that charity shop green parka and beret.

Here’s another pic showing you more of Norway – note still wearing that stripey jumper!  This is leaving Alesund. 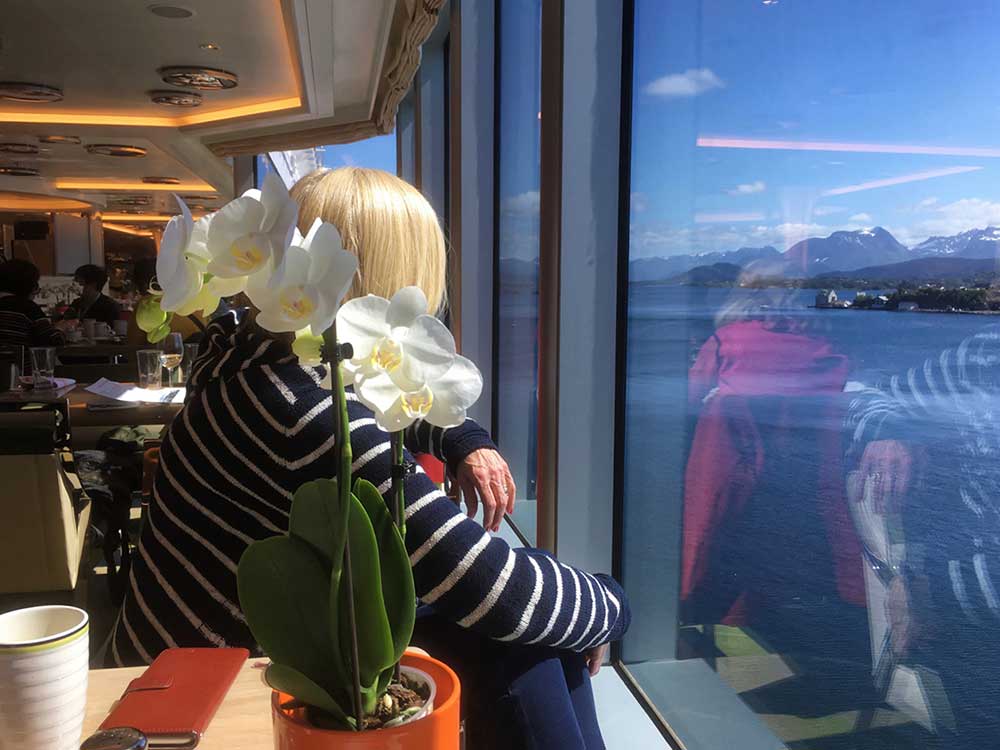 And in the pic below I’m wearing bra, vest, thin woolly jumper, thin woolly cardi and yes, there’s that stripey top again !   But these are scenes that take my breath away and want to remember through the grey and cloudy skies of an English winter. 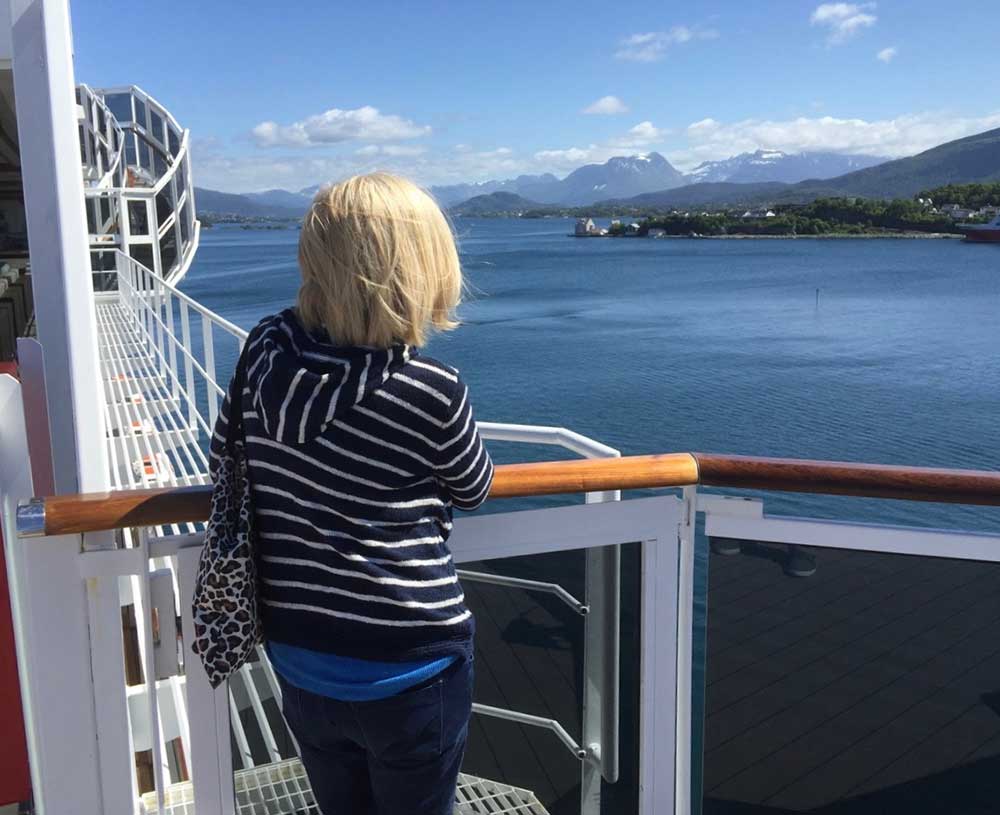 Here’s a pic of me below out and about in Alesund. 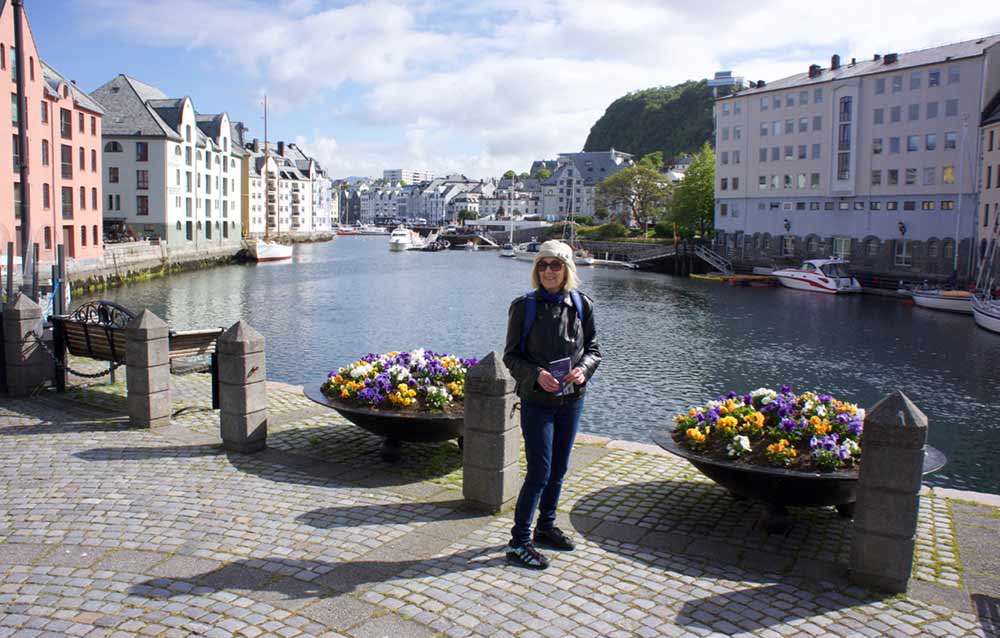 It was one of the coldest days of the trip!  Apart, that is, from the North Cape, which is the furthest north you can get to in Europe before you get to the Arctic.  We didn’t take the coach to the actual Cape, as it was eye-wateringly expensive whichever way you chose to do it (cruise excursion or local bus) but those who did said it was a rock, you know, nothing more! 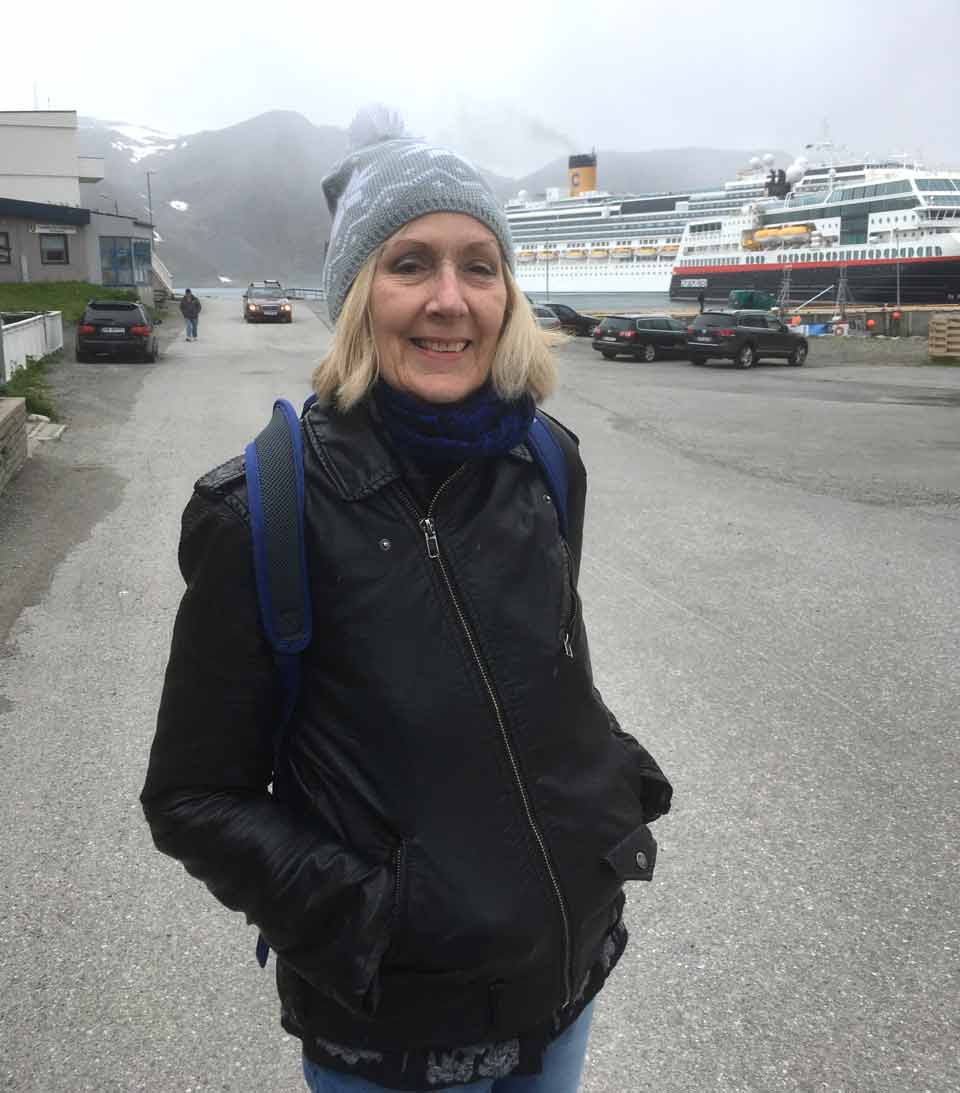 So we walked around the little port of Honningsvag, which was not exactly picturesque and had nothing in it (the few shops were shut because it was a Sunday) and it snowed!  Furthermore, it took one day of sailing to get there and two back – nope, that was the down-side of the cruise.  I’ve told them (in my after-cruise survey) that it really wasn’t worth the price of fuel to do that.

However, on sea days there was always the option of lying around the pool.  Some people took this very seriously and at the slightest glimpse of the sun off came their clothes, and into their shorts and bikinis they went.  I took not one item of clothing off my person and this was the nearest I got to the biggest swimming-pool! 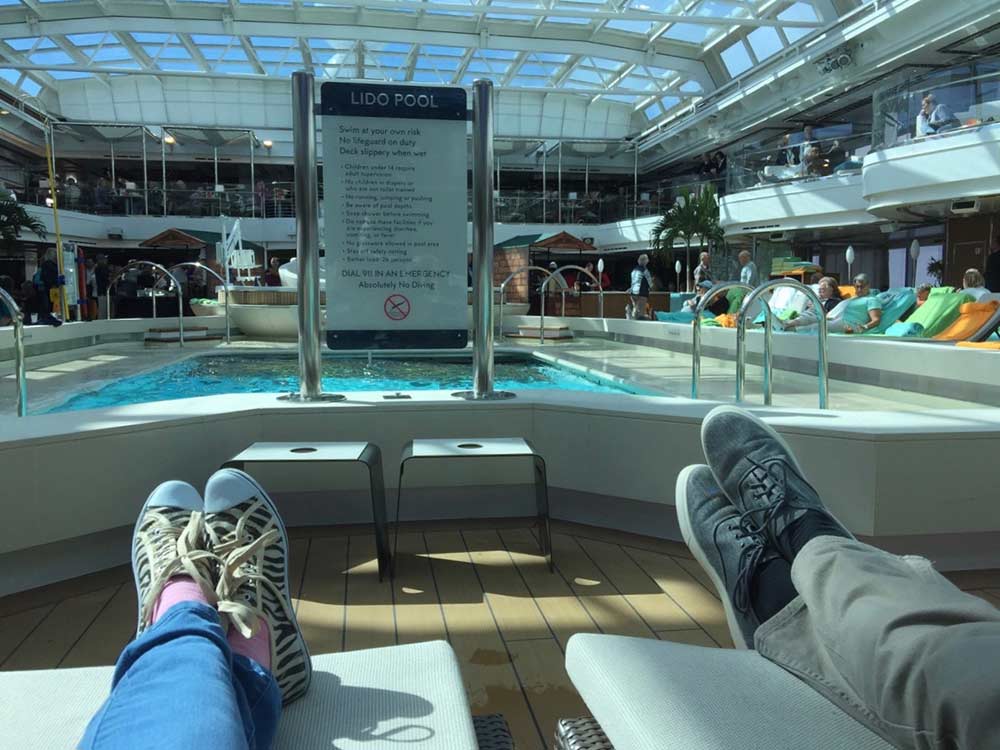 Actually it’s a fabulous cruise ship as above the pool is a retractable roof similar to the one at Wimbledon, which opened when hot and closed when cooler – they thought of everything.

And look at this scenic view – this is why I love cruising in and around Norway! 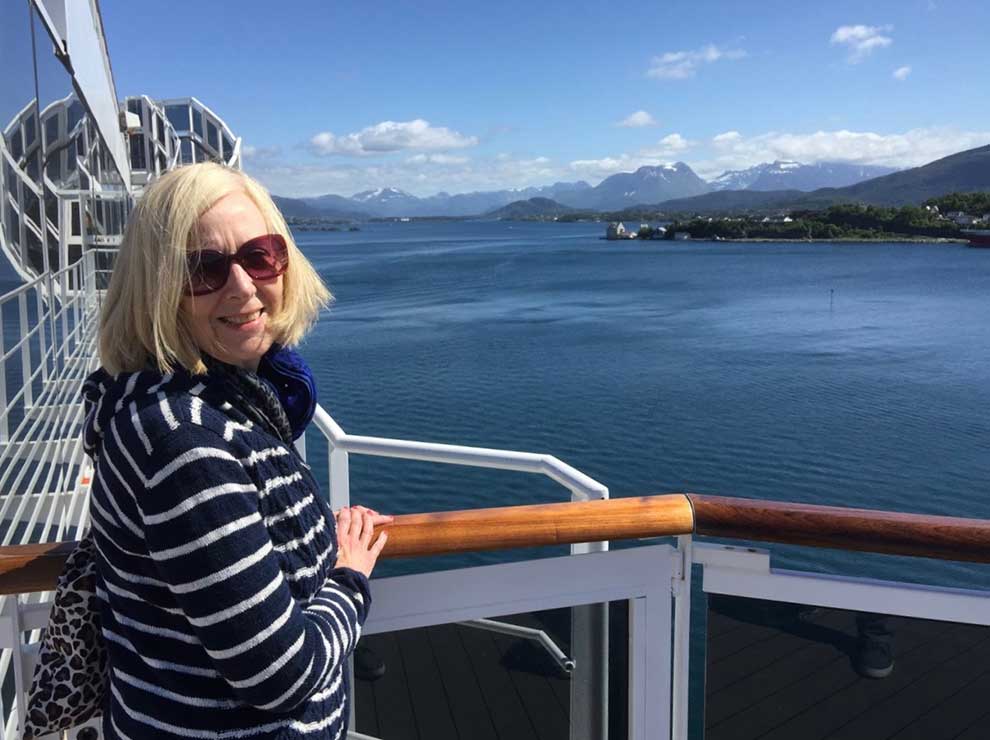 Ok, that’s all for now.  It was lovely to go away but great to be back.  Next post, which will be very soon, is all about the frocks!

Until then, with love