I’m back and the flat is festooned in washing, it’ll take me a week to get straight. We had a great time and loved nearly everything about the holiday, but tbh, it’s rare for a holiday to be totally perfect and like a curate’s egg this cruise was good in most of its parts but not all.

Before I sum up the holiday, and show you some pics, can I say that the blog itself has been through the ringer because in the middle of the holiday, when we were without any access to wifi, my host platform was shut-down, and the blog wasn’t available to anyone.  So, if in the last couple of weeks you tried to take a peek at the blog and found a 403 page many apologies. I was devastated about this but we could do nothing until we got back and then it’s been the Easter holidays (Happy Easter everyone) so we couldn’t work to resolve this until after Easter. Now, and at last, everything is back to normal. Phew!

Anyway, rather than ramble on about the cruise and each and every stop (I’m so not a travel journalist as my brain goes to mush when I’m away. I never pick up a pen to write a single word, which is so unlike me at home – but hey, I’m on holiday!) I’ll give you a couple of negatives and a few more positives about our time on the Braemar.

Let’s start with the good things! 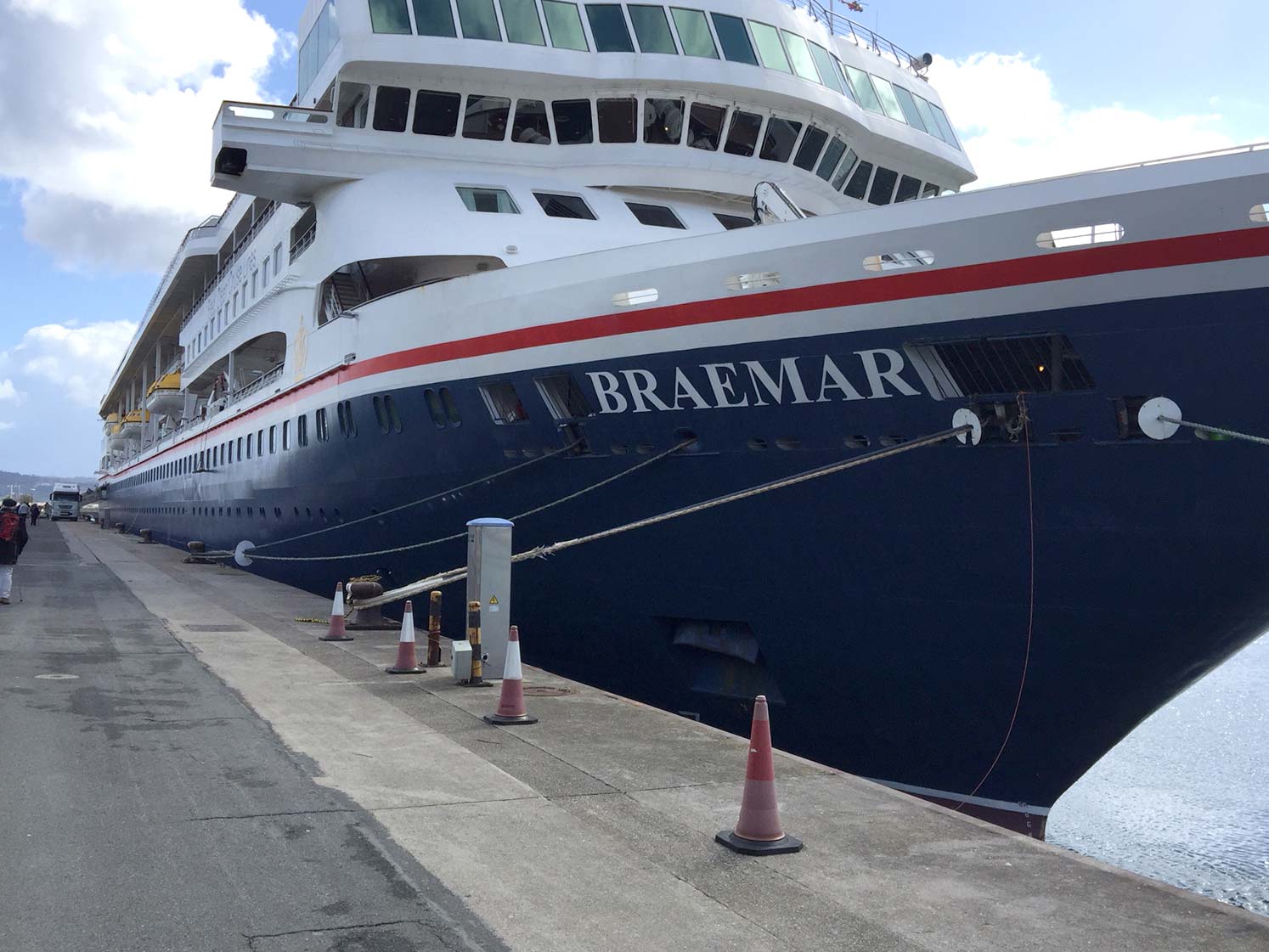 See those portholes near the waterline – yup that’s where our cabin was. 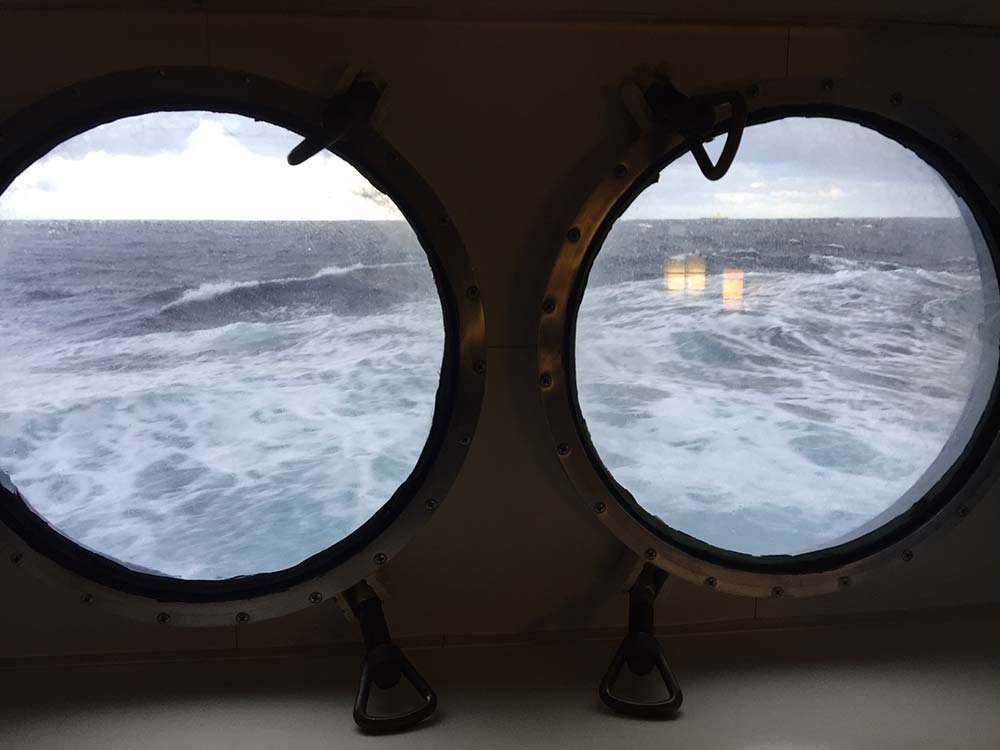 That’s the view from inside our cabin – on a good day!

But, perhaps cruises are not the best holiday for us. And why? Where to start?  OK, the entertainment.  I’m open-mouthed at the delight people feel about the all-singing and dancing ‘shows’. We went to two and they were lovely and so much effort put into the singing and dancing. But, nope, it’s just not us.  Also the disco started at 12.30am.  When the disco starts at 7.0pm that’s when it’ll be the kind of onboard entertainment I like. I just don’t do ballroom. Why?  Because in my teens and twenties and thirties it was always disco in a dark dive, a la John Travolta.  If we had more of that then I’d be dancing the entire time.

And no cinema. Actually the choice of films in our cabin (that we could stream down onto our TVs) was good (they even had Three Billboards) and during the fortnight we watched four films.  But if there could have been a large screen somewhere it would’ve been better.

I always forget that I’m not a good sailor!  However, the tablets work, which was just as well as the seas were occasionally rough, and very rough in the Bay of Biscay, and unlike those big ships that plough through everything our little ship rocked and rolled with the 5-metre waves.

We had some great conversations with people of all ages. But some of them did go on a bit about how many cruises they’ve been on. Or were faintly surprised and astonished that we had only been on 6 cruises in 7 years, when they did that number every year and had been doing that for 20 years or more. Gosh, is all I can say. Out loud that is!

As a result, we aim to do holidays and cruises somewhat differently in future.  Have you come across the Hurtigruten voyages and expeditions?  It started out as the Norwegian car ferry and post delivery service – and still is.  But it’s developed its cruising side.  We’ll probably go on that next year as it will be a great opportunity to visit nearly every port in Norway (which I adore) and meet ordinary Norwegians rather than cruisers.

Seriously though, it was great break and a good holiday, but it sure makes you appreciate being back in your own bed in a silent and stationary bedroom.

And now for a few pics. Here we are embarking. It was snowing down south on embarkation day. I was glad of that cup of tea! 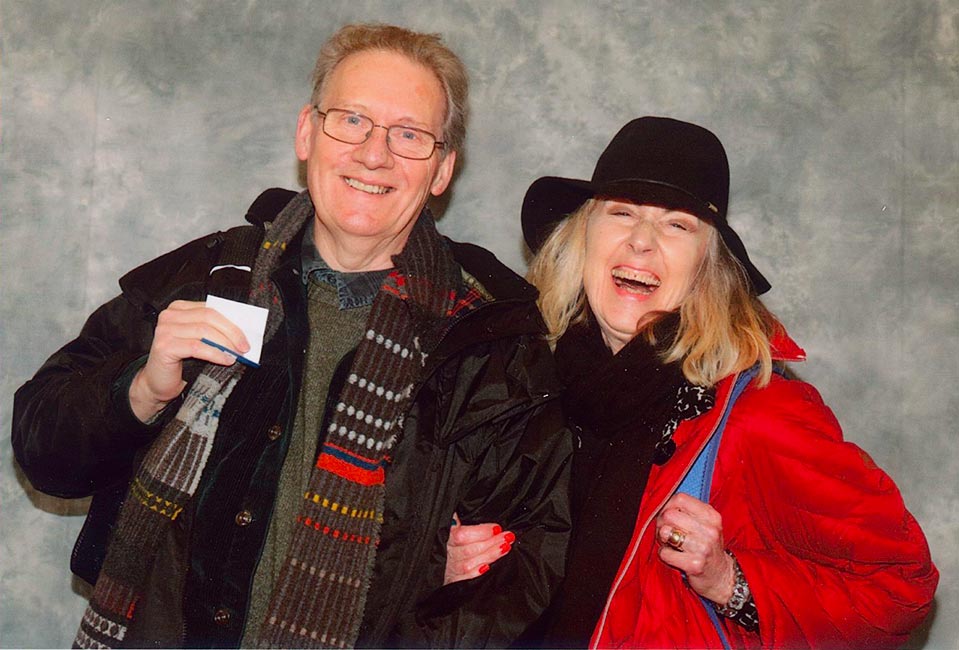 The inevitable pic they take as you board the ship. Usually both of us look awful, but this one shows how happy we were to start our holiday.

It was still freezing cold in Corunna our first port of call. 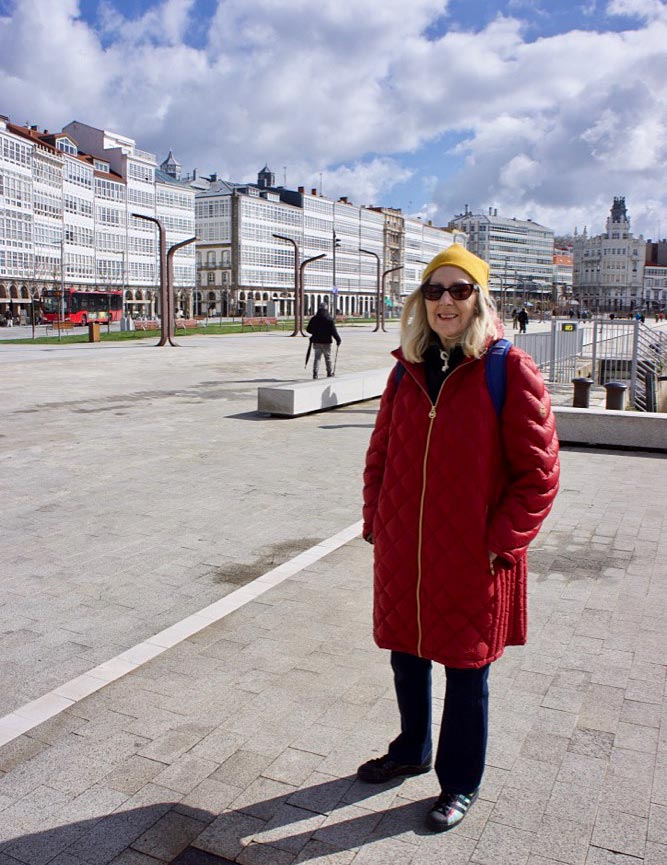 That bargain Michael Kors coat came in handy I can tell you! I had several layers under it as well.

The first formal night gear. All dresses worn on the cruise were bought from charity shops and all bar one (at £15) cost £10 and under. You can find anything in a charity shop and that includes clothing of the highest quality. This dress is very forgiving as the fabric stretches. 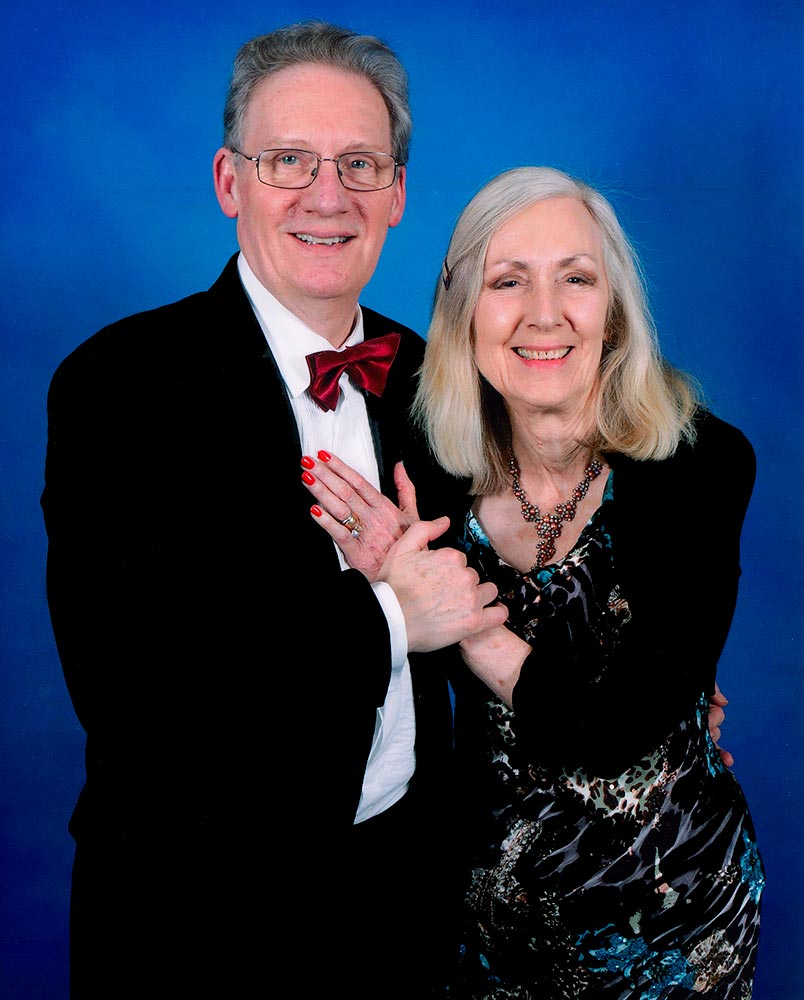 You can see more of the dress below.  My goodness, note the hair – still growing out the dyed blonde bits. 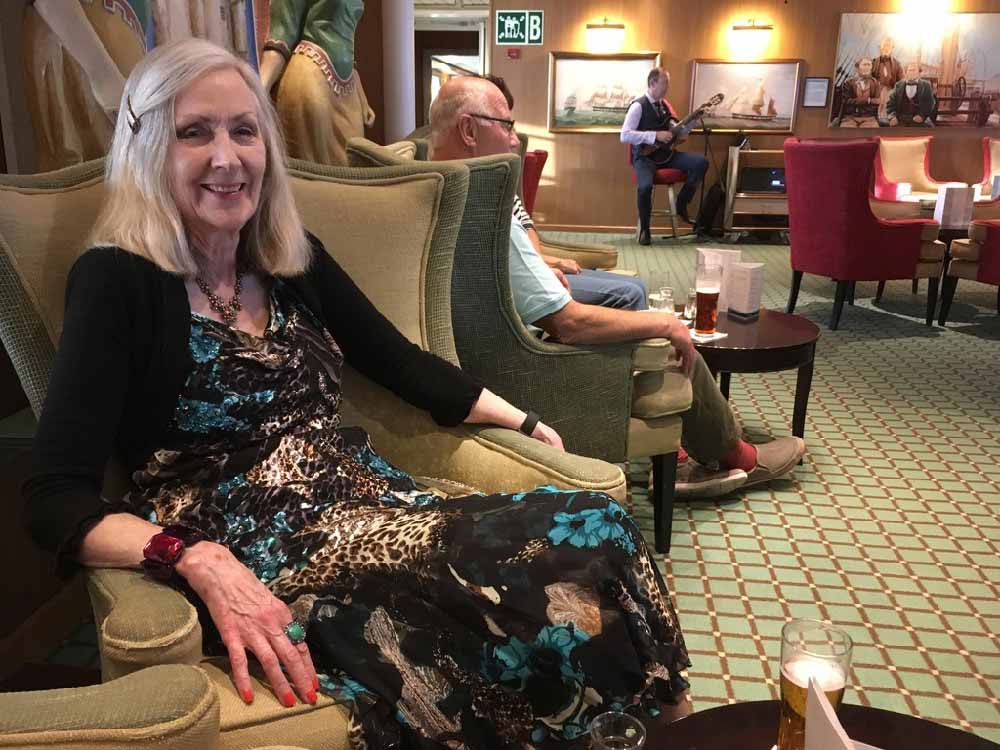 I’m well wrapped up as we travelled down the coast of Spain. 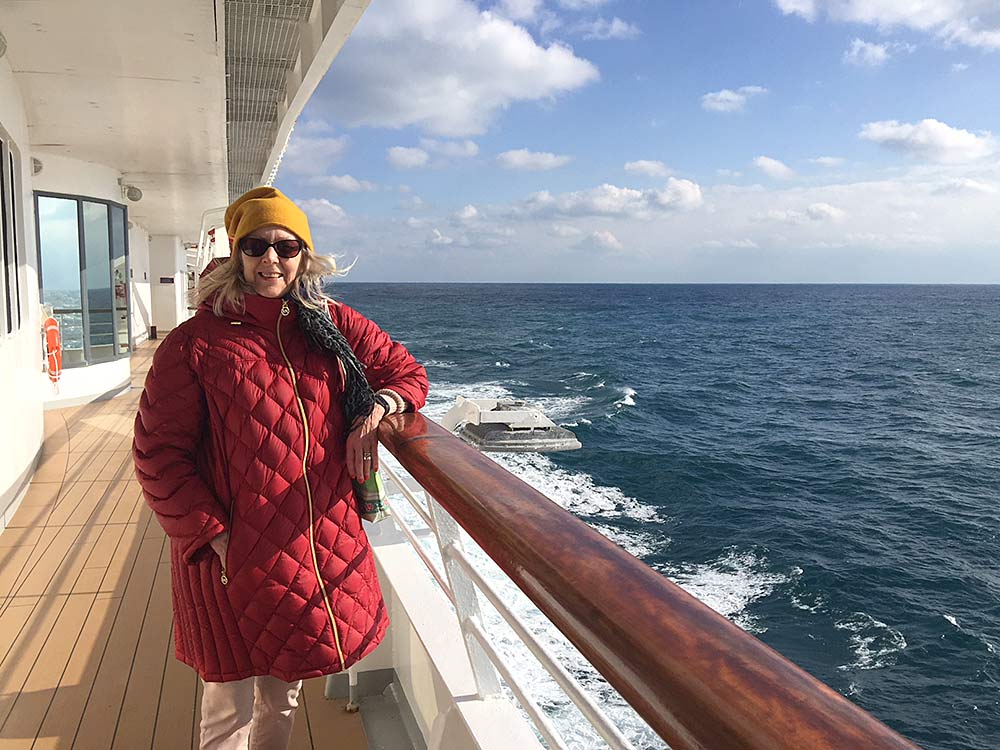 Those are the pink jeans bought in Peacock’s for £16.  Actually, as we went further down the coast it began to warm up and by the time we were in the Mediterranean there were several days that reached 18-20 C (approx 65F). On one of those warmer days we went up to the top deck and were astonished to see people in the swimming cossies baring their flesh and sun-bathing.  This pic shows how far I went!  I think Mr Frugalfashionshopper took off his woolly jumper! We do not do the sun-bathing thing.

Here’s a dress I wore for the ‘Smart Casual’ nights. I don’t do casual so mostly wore dresses.  Here’s another – it’s that lovely one I bought recently for just £10. I could have worn this dress for a formal night. And I’ll just have to find an excuse to wear it in Brighton.

Our little ship took us up the river to Seville, through a lock and an amazing bridge that swung upwards to let us through – with not a lot of clearance either side! It’s still not all that warm.

Once in Seville we walked into the centre.  It was Palm Sunday and this is what we saw. 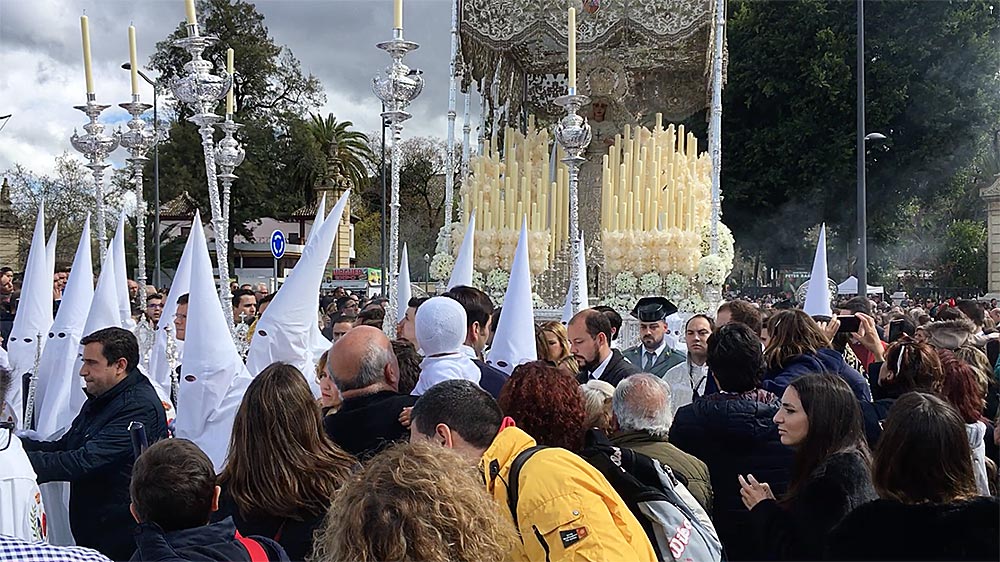 Seville is famous for its many Holy Week processions performed by brotherhoods some of whom originate from the Middle Ages. We felt privileged to be part of this ancient tradition, because it was quite accepted that you could run alongside, take photographs and even join in and go with the people following the procession. It was noticeable that all the Spanish were dressed in their ‘Sunday best’ and we felt a trifle scruffy in comparison to the besuited young men and the women in their lovely dresses. 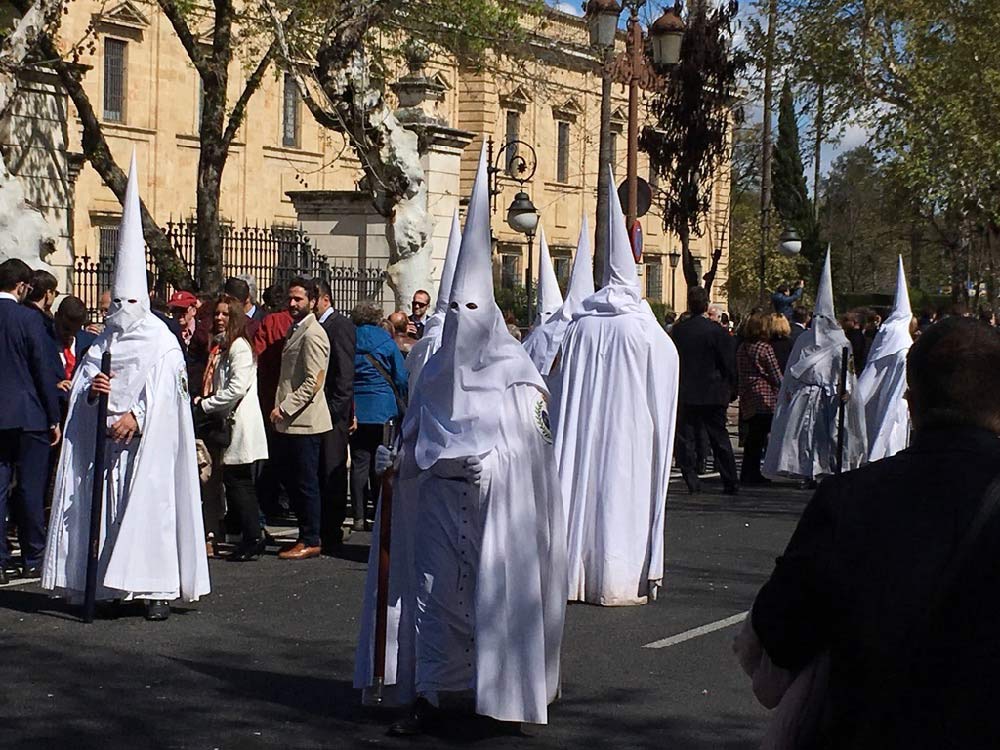 At first sight, I have to say those costumes looked very weird.  But one should always attempt to understand the culture of the places you visit and respect the traditions that are not yours. These costumes are penitential robes worn to celebrate the Passion of Christ. All the participants carried long navy candles and some were walking barefoot.  Every brotherhood carries a ‘Pasos’ or float that depicts scenes from the gospels. Some of these are centuries old.  The one we saw was covered in silver and candles and was dedicated to the sorrows of the Virgin Mary. Actually, it was awe-inspiring, and I’m an atheist. At the same time it was obviously a happy holiday occasion and it was great to see so many families out enjoying themselves.  Respect to the people of Seville. Totally.

I got bored wearing dresses all the time so here’s what I wore going back down the river away from Seville. 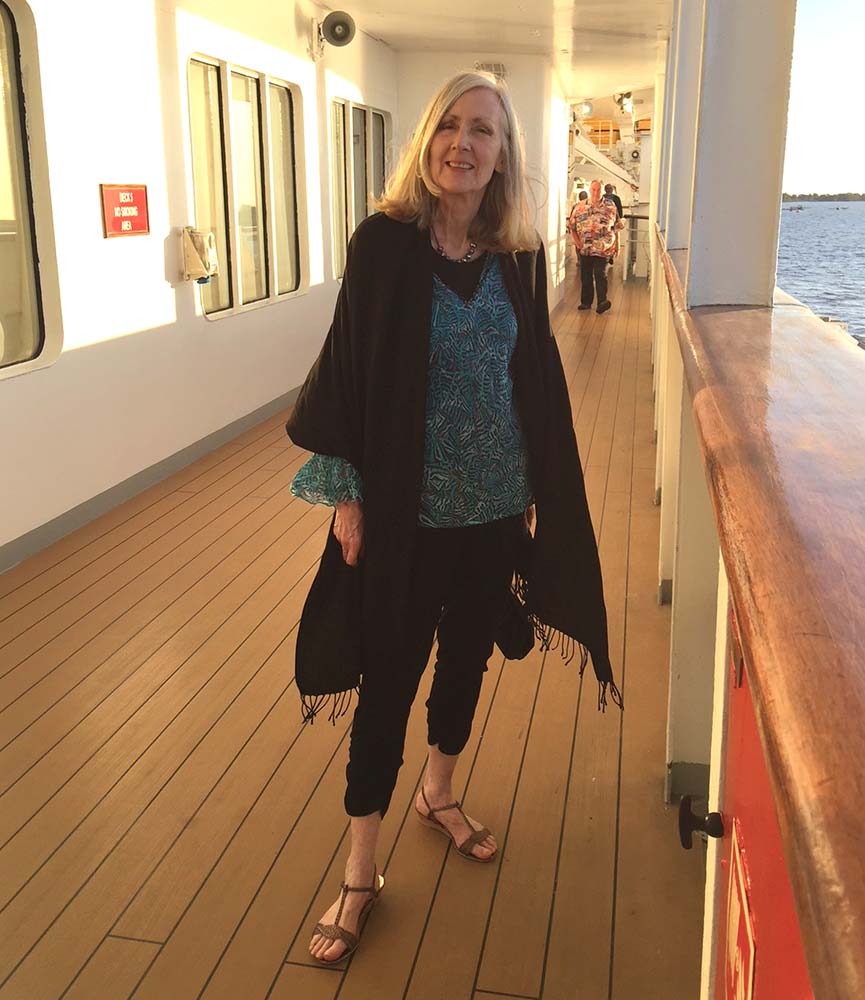 By this time it was warm enough not to wear tights! 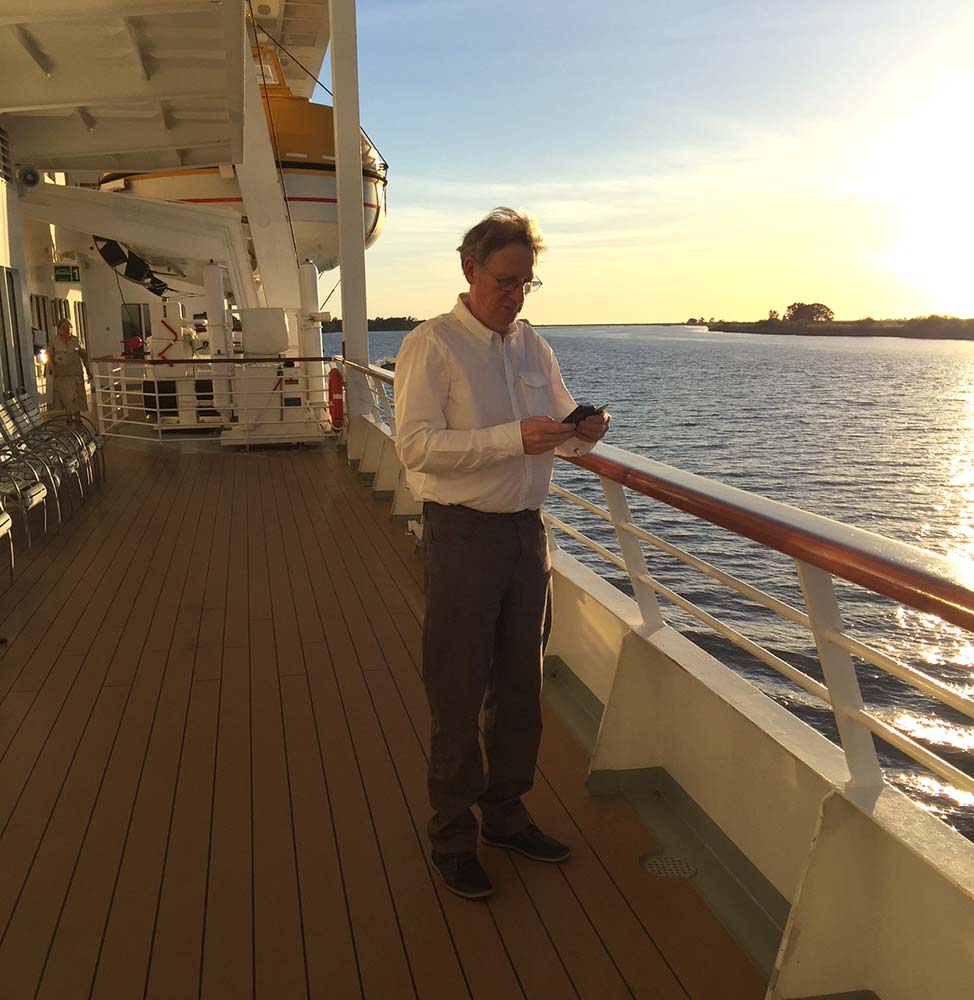 As you can see the evening light was beautiful but here’s Mr Frugalfashionshopper looking at his phone – it was so good to get a connection.

I also bought a skirt in M&S in Gibraltar – yes, I went shopping in the main street instead of taking a tour round the Rock.  But sitting having a coffee watching the people is what we like to do on these short visits.  However, we’ve decided we must go back to three of the stops: Malaga (loved it), Seville (so interesting) and Lisbon (so much to see). Here’s the skirt. 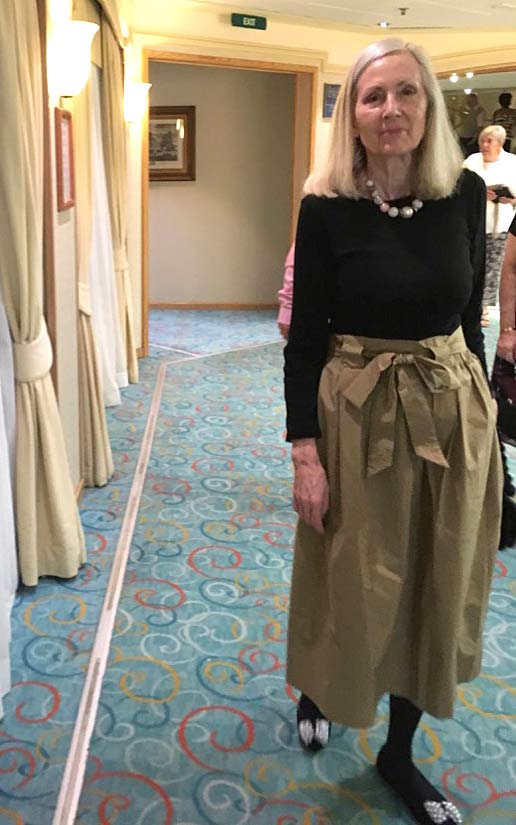 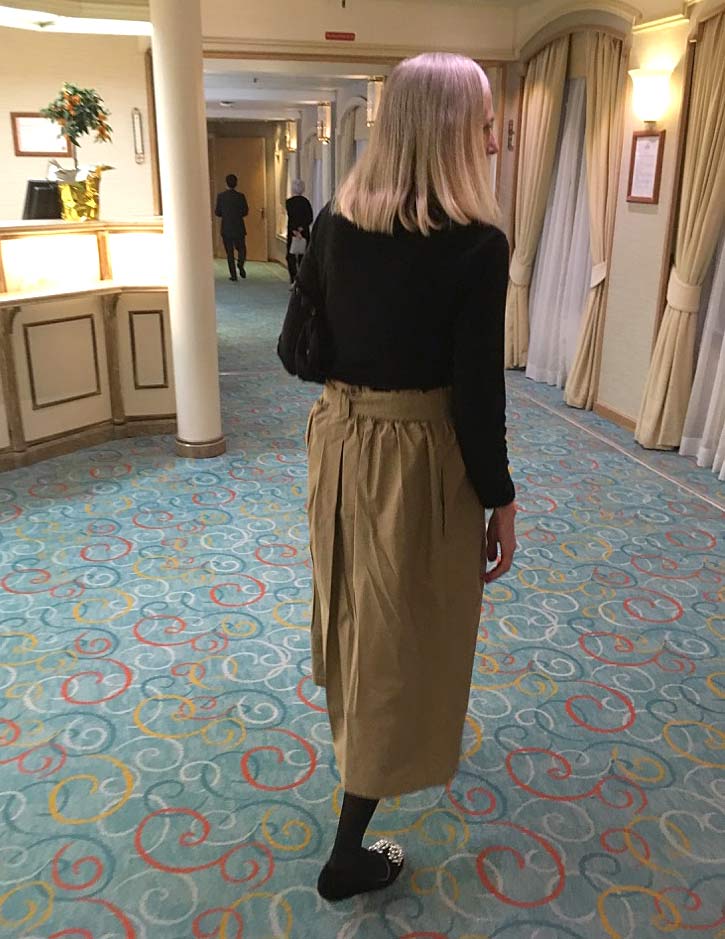 I also bought this blouse (see below) which I thought was good value at under £20. I’ve just read an article on how M&S has improved its approach and pricing and consequently its sales. But, said the article, has it really caught up with how the High Streets are evolving, or not?  Did you know that Instagram influencers are really the way to sell clothes? Me, neither, but actually, think on this. Apparently one ‘influencer’ posted herself wearing a dress sold by an online company. The next day it sold out and there’s a waiting list for it. See, not a single shop was involved. That, my friends, is the future. 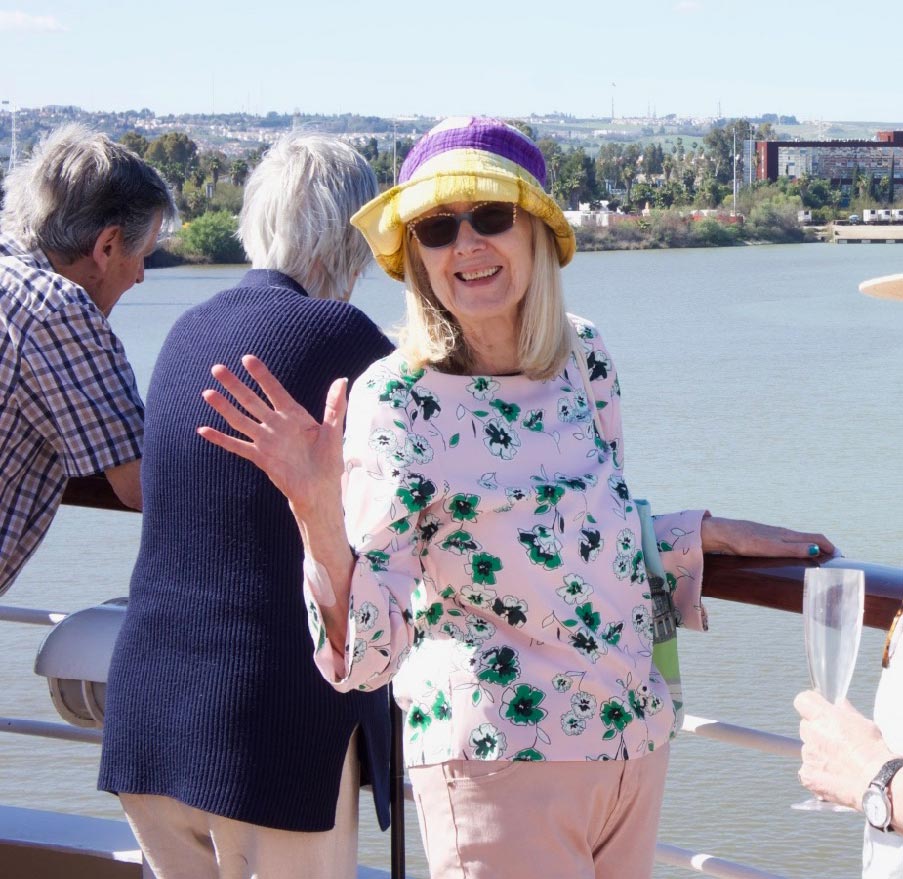 And here’s another view of the hat. 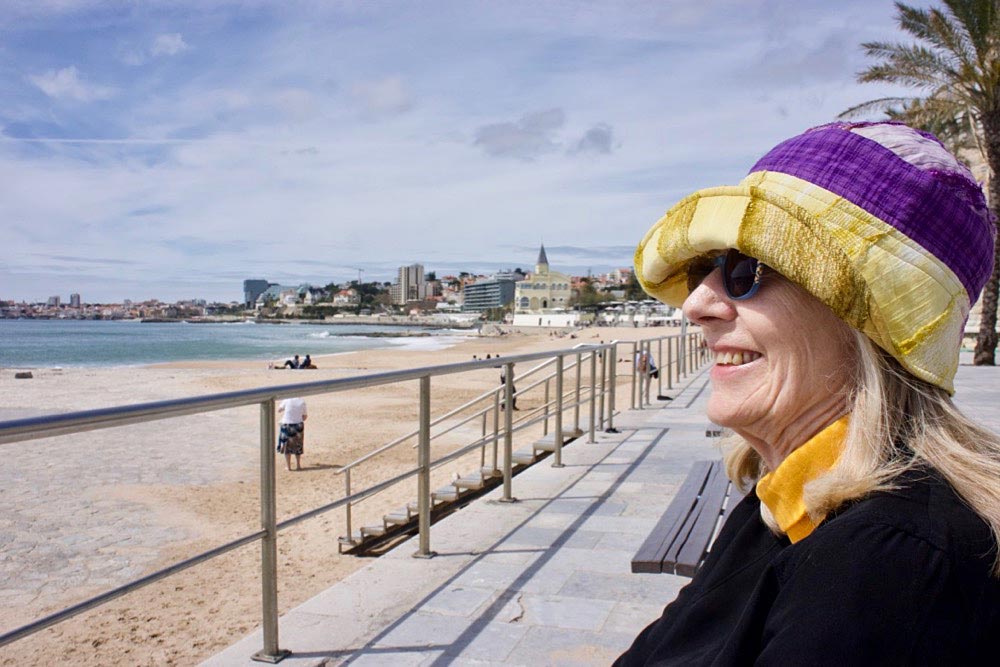 Oops, I need a scarf to disguise my neck – if I was that bothered!  Here we’re close to Lisbon in the nearby seaside town of Estoril, which felt and very much looked like a warm Sandbanks. Sandbanks is a seaside town on the south coast of the UK and a place for the wealthy, as is this town as the villas in one estate agent ranged from 1 million to 7 million Euros.  There was a cool breeze, which made it very reminiscent of a summer’s day in England.

We didn’t take many more photos as there were just two sea days to get us back to Southampton, of which one day (the one in the Bay of Biscay) had exceedingly rough seas.  We spent most of the time reading in our favourite part of the ship – a cafe with excellent coffee. By the second week, the staff knew exactly what we wanted and got our coffees without us ordering them! 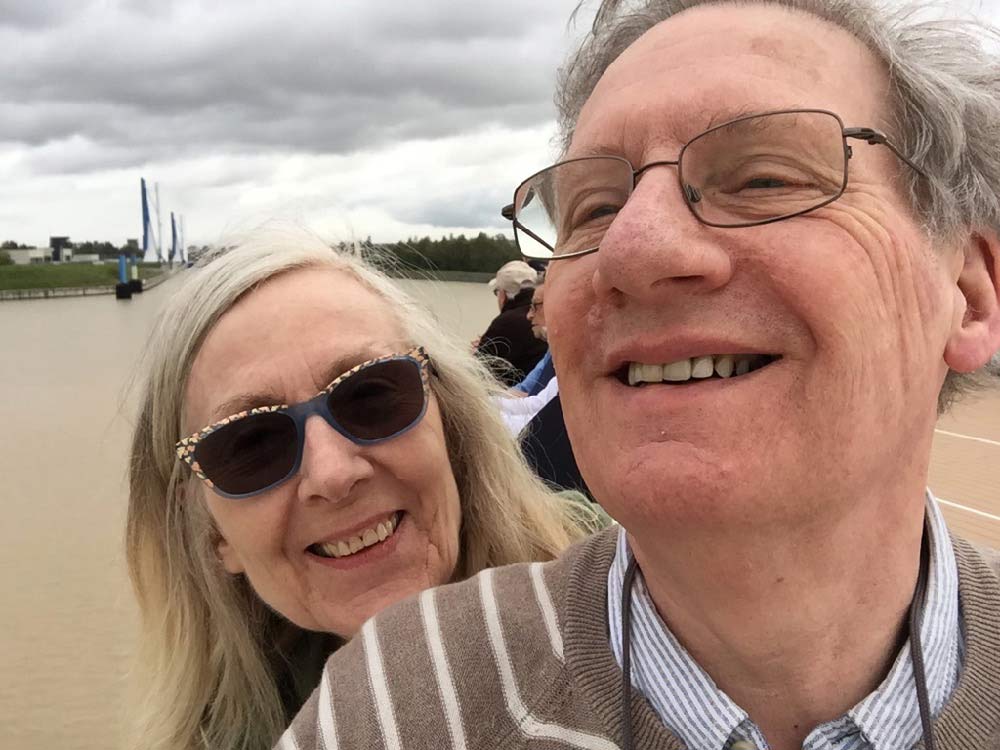 Here’s the last pic. A goofy selfie taken by Mr Fruglfashionshopper.  It sums up our carefree two weeks, but you know what, a holiday makes you appreciate your home, and it’s great to be back. I missed you all, and it’s good to be blogging again.      🙂

Catherine of Not Dressed as Lamb and her iwillwearwhatilike session

Judith of Style Crone and her monthly #hatattack

59 thoughts on “Cruising around Spain”