I haven’t always been this tidy. 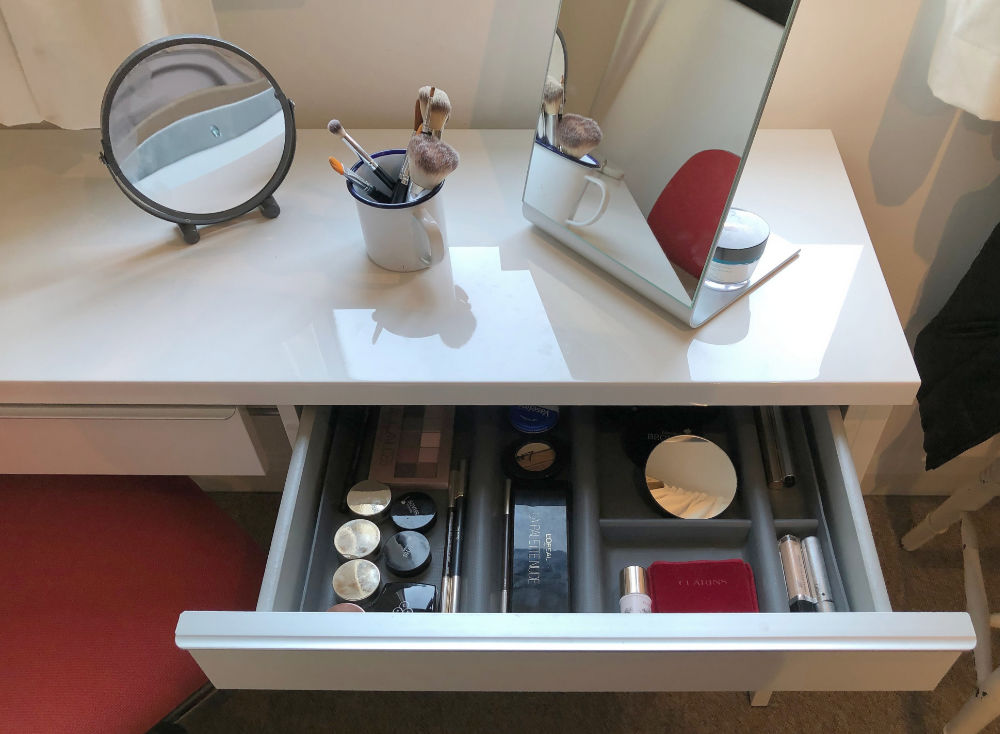 But a small flat makes you put away stuff quick.  At this point in my life I don’t leave things lying around as there aren’t any spare rooms for things to be just dumped. Downsizing certainly makes you face up to how many possessions you have and, critically, where you put them.  But there’s quite a trend at the moment for tidying the Kondo way. This is the quite exquisite Marie Kondo, the Japanese expert in letting things go and putting things away.  Note that there’s a bit of a backlash against her, but actually I’m not having it – she’s lovely and has some great ideas. I got her book when it came out, and you can pick and choose and take from her what you will. Because, some of her advice makes good sense.

Currently, Kondo has a series on Netflix and one day I watched 3 episodes back-to-back. That’s enough – I get what she’s saying.  She’s such a sweet person though, and she’s tackling people who have serious issues around stuff/possessions/things, I mean they’re either very, very dis-organised or near to being horders, although I was totally taken by the lovely family who were crammed into a 2-bed flat. I get that as there’s the two of us in 2-bed flat.

You know why I downsized, don’t you?  I was determined to not be any bother to my kids, so the decision to move to a smaller place with fewer possessions was centred around that, plus, you know, it’s sensible, and finally, for a variety of reasons I won’t go into here, these apartments are cheap. I live in one of the best roads in Brighton yet this flat cost next to nothing.

As far as I’m concerned, this move was such a positive thing to do. And btw, the same goes for Mr F, as I’ve heard several of the very much older residents in this block/condo saying that they couldn’t possibly have moved any earlier because their husband wouldn’t let them move. Actually, I’ve met this response in my younger ‘old’ friends. And an acquaintance said to me, well, I’m not going to worry about my children sorting out my things. I’ll be dead! Gosh, some people….

Anyway, back to tidying. As I said, I don’t follow Kondo to the letter, and interestingly the first 3 episodes showed her folding system, but only t-shirts and jeans. Do have a look, as it’s a revelation, but what about flouncy skirts?  Or blouses? And my dresses? But, I do roll my socks and knickers.  And I love doing that! 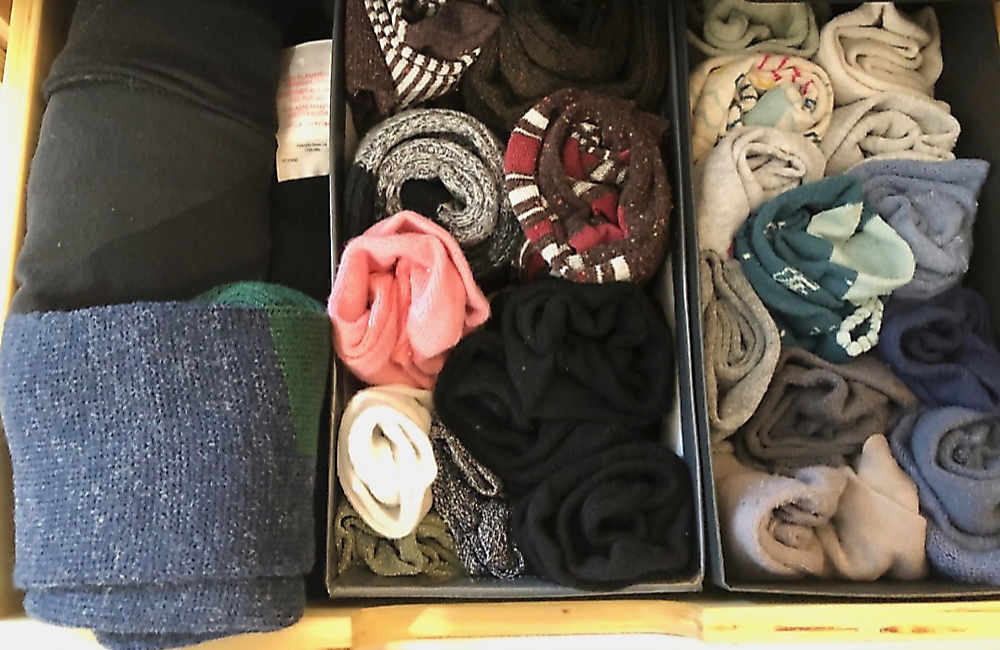 I also roll things when I pack a suitcase.

Then there’s paper-work, the detritus of our lives: the letters, the books we can’t let go, the invoices, the receipts, the family history, this list can go on and on. Well, all family history stuff is kept.  My children (in their 40s) are not the least bit interested in family history, but they will be. Letters – nope, receipts – no, invoices – no, old bills – nope, but tax information – yes, absolutely keep what you have to, instructions and manuals – get those online, so chuck.

But photographs and books? This is, by far, the most difficult area, bar one (see below). Photographs are Mr F’s area. As well as being a keen photographer he also loves organising stuff. When he inherited my mother’s biscuit tin of photographs (in those paper envelopes) plus their negatives, he filed the lot!  And all our photographs have been catalogued. The next step was he digitalised all our photographs – don’t ask. It seemed to take forever. But now the photographic collection has entered another stage, which consists of two things. First is, with my input alongside his, we are beginning to throw out photographs that don’t have meaning, as in blurred shots and views without people. Incidentally, we also have all my mother’s family albums including those of my grandmother’s, which, before my mother died I asked for all the names of these Edwardian and Victorian people, otherwise, you’d be saying, who are they?

And then I posed a challenge to Mr F, saying of what use was this digitalised and catalogued collection? How would future generations access this? There’s a really long explanation and answer here about how digital progress is so fast that today’s digital stuff will be unusable in just a few years, forget two generations away. To cut to the chase, he is making a series of photographic books for different occasions and different people. So far, it’s been grandson from birth up to the age of 10, and daughter and son from birth to the age of 40. This is what Mr F does all day now!

But books? This is where there’s quite a backlash against Kondo’s view of clutter. Books?  They are so important, etc, etc. Thing is, I had that usual huge collection of books ranging from childhood favourites, books from uni, novels, and those fat non-fiction books, some of which I read, and some where I said, I simply must read, but often never did.  In one house I had there was a whole room of books. In addition, I always had an office with more and more books. But not now, nope, no.  Absolutely, no.  OK, we do have the 2ndbedroom as an office, and from our last house when we had books in the living-room plus two sets of shelves full of books in my office, and 3 sets of shelves in Mr F’s office, we have gone down to one set of shelves for both of us! I have very, very few novels in my area, it’s mostly non-fiction and still, I admit to having a few of those, I simply-must-read-but-haven’t-yet!  But, I do not decorate my flat with books, end-of. One, there are libraries, two, there are charity shops full of books, which I read and give back, and I still buy the occasional book (at Waterstones) but, you know what, I mostly pass them on. Then there’s the Kindle on my phone – I’ve quite a library there!

Here’s the shot of my books shelves showing you how they’re used now! 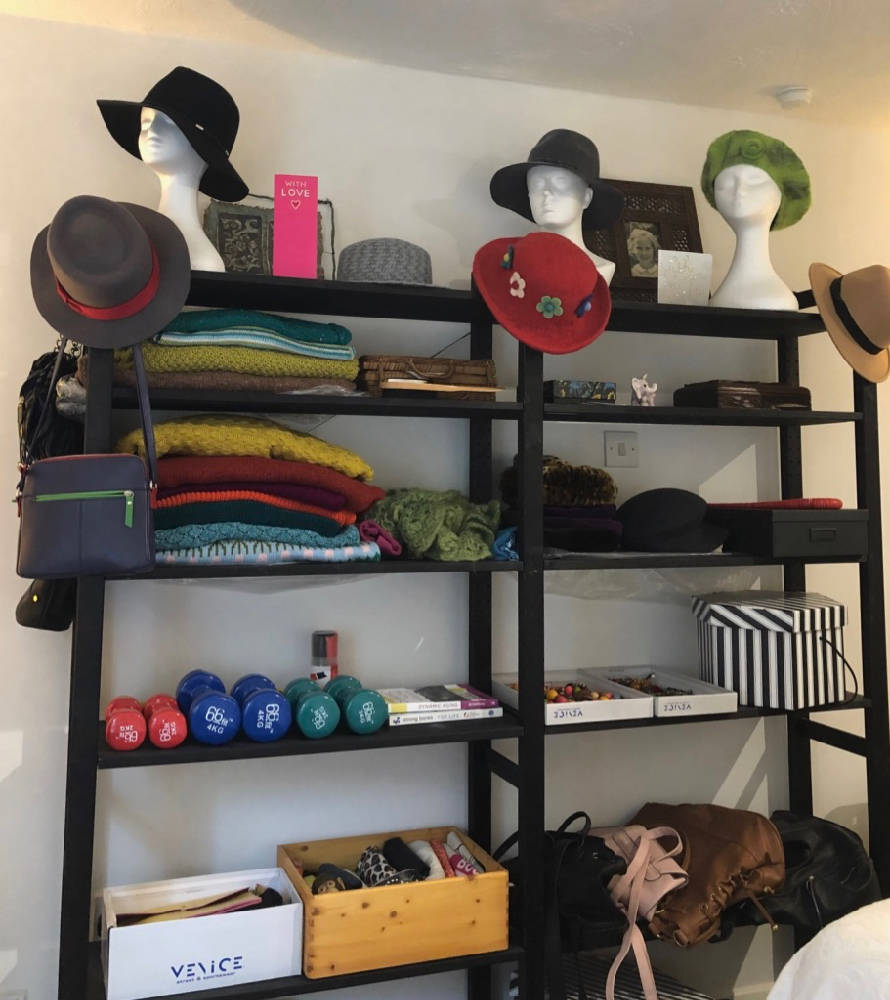 Sentimental things, though? Ah, yes, they are the sticking point. I have one box of the ubiquitous family silver, which I saw my mother polish once a week throughout my childhood. They don’t have any meaning to me, apart from, feeling, yes, I must keep these, so they’re archived in my daughter’s loft. But I have kept the silver teapot which we drank tea from every single day of my childhood – it’s not used any more but it is on display. 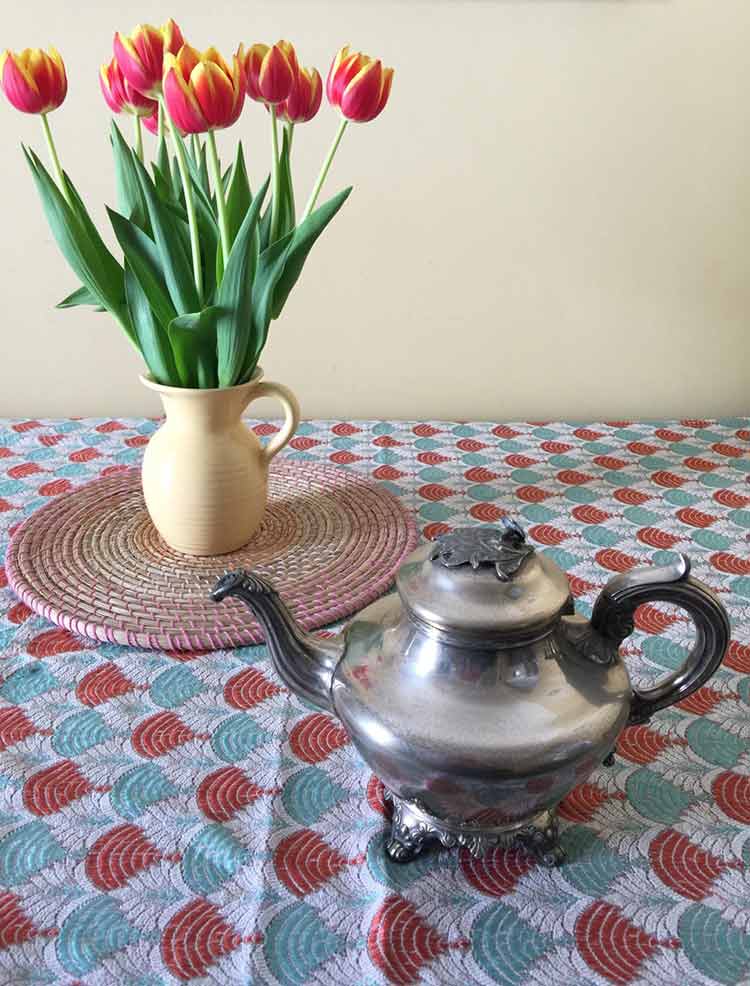 I haven’t mentioned clothes. I have a one-in-one-out policy and now am pretty good about that, and also I’m aiming to not buying new this year. Also I’ve started taking a couple of things to a dress agency with some success. But I do get how difficult the whole thing is. Let me know how you feel about hanging on to possessions.

P.S. The YouTube thing is going well, and there is now an icon at the side (or at the bottom if reading on a phone) which will take you straight to the channel. You now have a choice of 3 videos to watch: a 25-minute video; a 5-minute video and the latest, which is a complete makeover with a lovely beautician who gives me (and everyone else) some great tips! More to come soon, but so much to learn! This is just the beginning. Thank you so much for watching.  And, hey, let me know what you want to see!

29 thoughts on “Being tidy”