I got back from our holiday in the Suffolk town of Woodbridge late on Saturday and have been catching up and doing the washing ever since. It was great to get away, but it’s lovely also to be back home where you know where everything is and you can get to anything you want, because actually, I continue to find other people’s bathrooms a bit of a nightmare. This time it wasn’t a bath situation as there was a working shower (phew) but gosh, was it a small one! We have a shower that is the length of a bath and when we got home and got into it – it was totally wonderful not to have the sides of the shower pressing into you, which felt quite claustrophobic. But my main peeve was that in the two bathrooms of the Little House there was absolutely nowhere to put any of my makeup, or makeup remover, or any of the paraphernalia that I use. I must sound such a grumpy old woman but I don’t think holiday cottage owners think things through at all.

Anyway, enough of that because the main thing is we had a great time. Mind you, the weather was very British in that it rained a lot and the first 4 days were quite cold!  What’s more I’d packed in the hot weather as the previous week we’d had our one week of summer weather! I really tried to be sensible by saying to myself, ‘no, it’s going to be cooler next week’, but I kind of failed and didn’t pack the near winter clothes that were needed. In fact I had to buy a raincoat (from Peacock’s at £35) as I’d only brought a thin pac-a-mac, and yet despite being lined it still needed several layers under it. I hear there is a heat wave going on over the pond but in the UK, look that’s a woolly winter beret I’m wearing in June, which was much needed I can tell you as there was a cold north wind during those first 4 days. 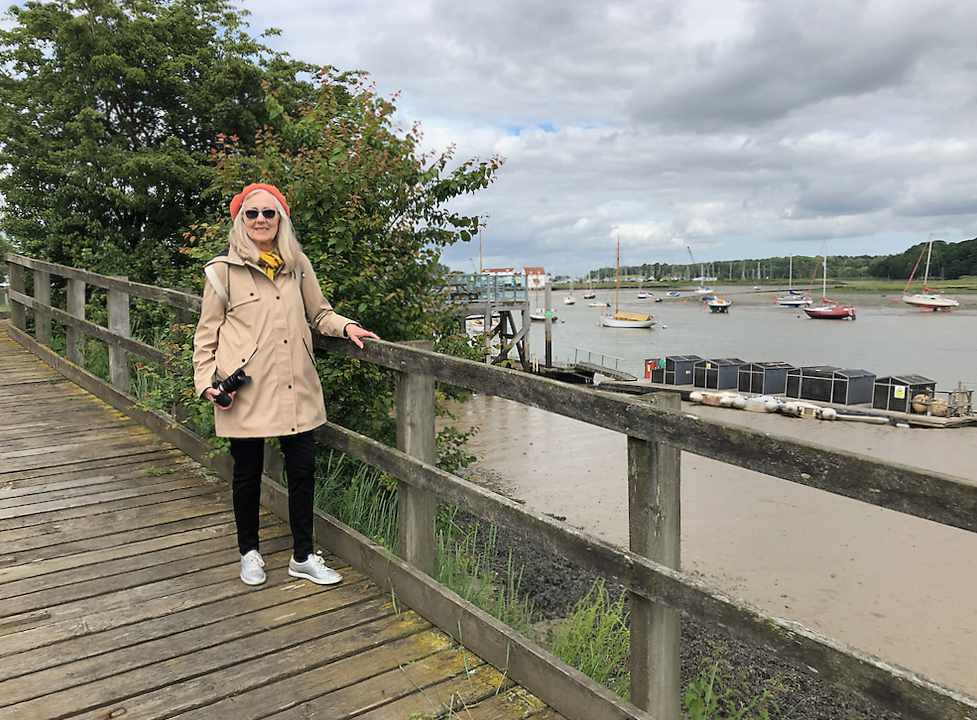 This was such a contrast to our other holidays in Woodbridge, which have mainly been in much better weather. Here’s a photo of me in 2018. 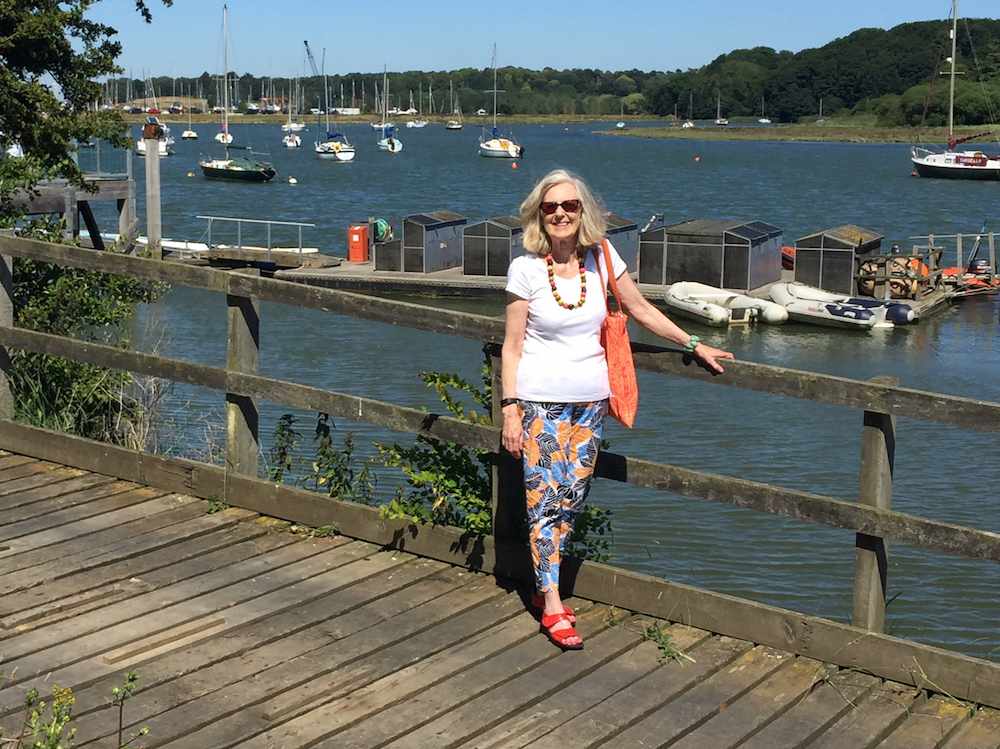 Oh boy, I remember the heat of that year.  And nice as those pants are they went into the charity shop bag earlier this year as they are a UK size 10!

During those first few cold days I also bought a beautiful wooly jumper, which wasn’t a charity shop item!  Here I am wearing it over my Pilates kit. 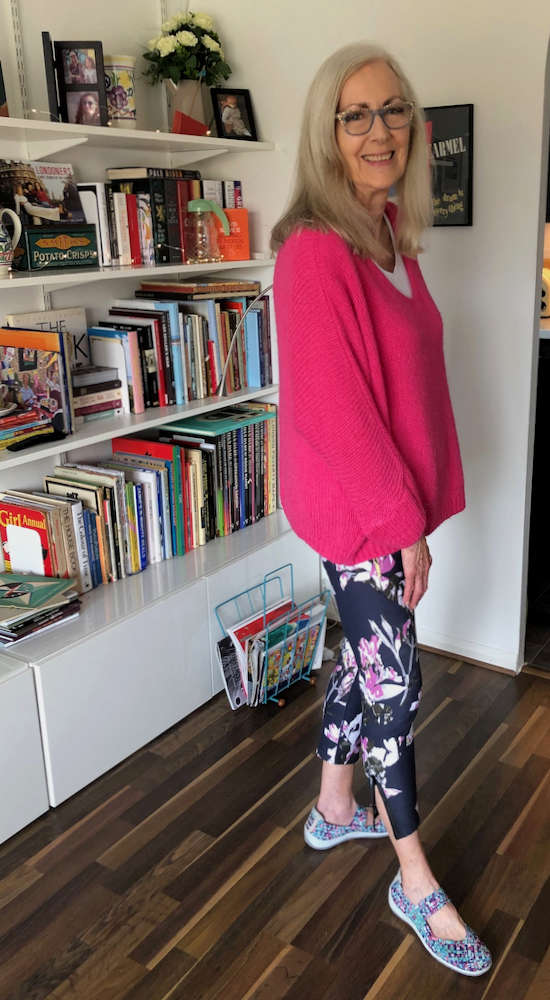 As you can see it’s over-sized. 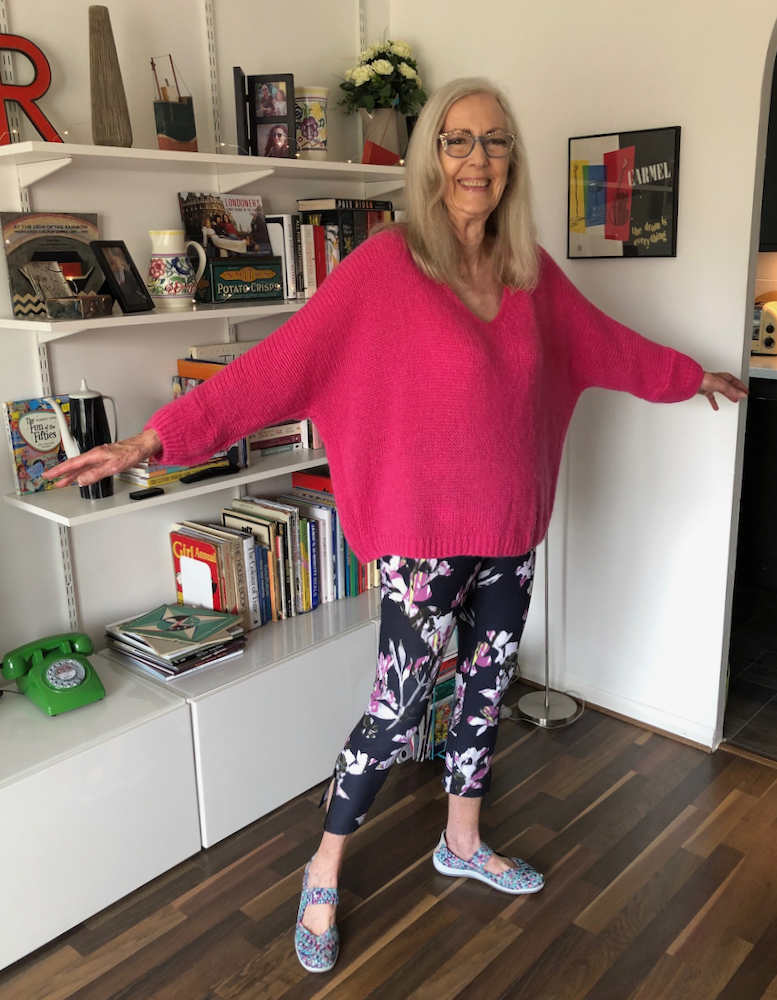 It’ll be great to wear in the winter as it’s really warm. The owner of the shop said I was the fourth person that morning to buy a wooly jumper!  During my week away I also found several items from local charity shops, which you’ll see soon, but enough of fashion. Here are some shots of the beautiful coastal Suffolk I know.

The first one shows you the cold and grey but rather beautiful landscape of the Woodbridge riverside. The town lies 8 miles up the river Deben from the sea so the waterline is tidal and the shot below rather sums up the chill and the damp of the first few days. 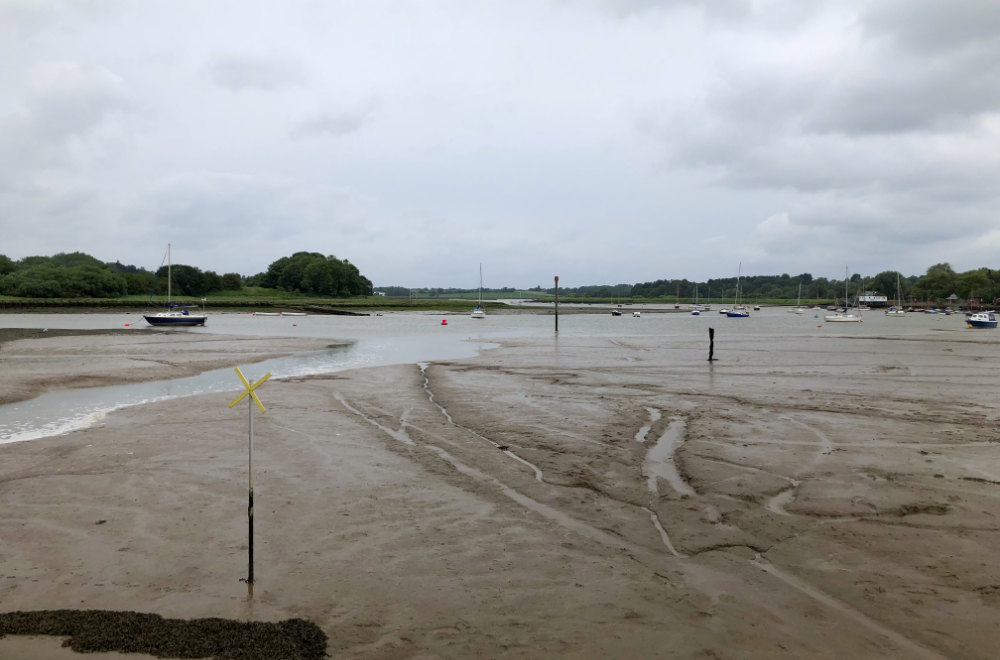 We did a lot of walking along the coastal path of the Woodbridge river increasing our steps every day. On Tuesday we ventured further and went to Snape Maltings. Originally a malting brewery it became the site of Benjamin Britten’s Aldeburgh festival and is now a famous arts complex.  It was another grey and very windy day and there’s Mr F pointing his camera at the reeds that rustled in the wind. 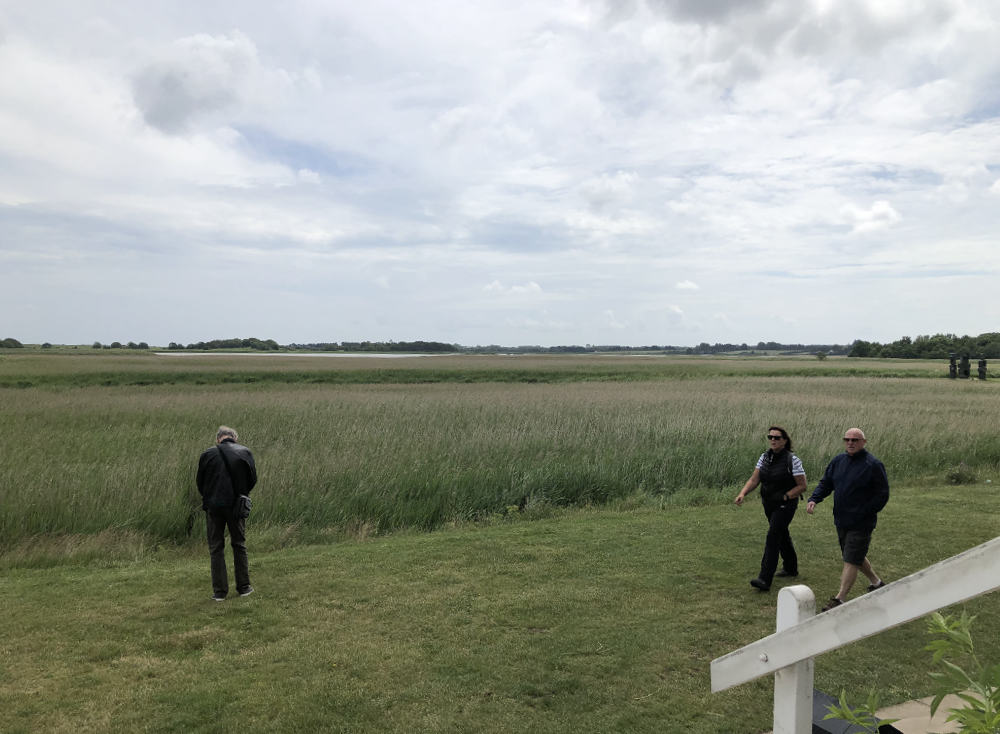 We’ve visited Snape Maltings many times over the years and I have dozens of photos of the children looking through this sculpture. I have to say that sadly, while I can remember when the site was scruffy and unspoilt, it’s now a bit of a tourist trap and it’s full of ‘shops’ enticing you to buy, buy, buy at what I think are horrendous prices. Safe to say I resisted! 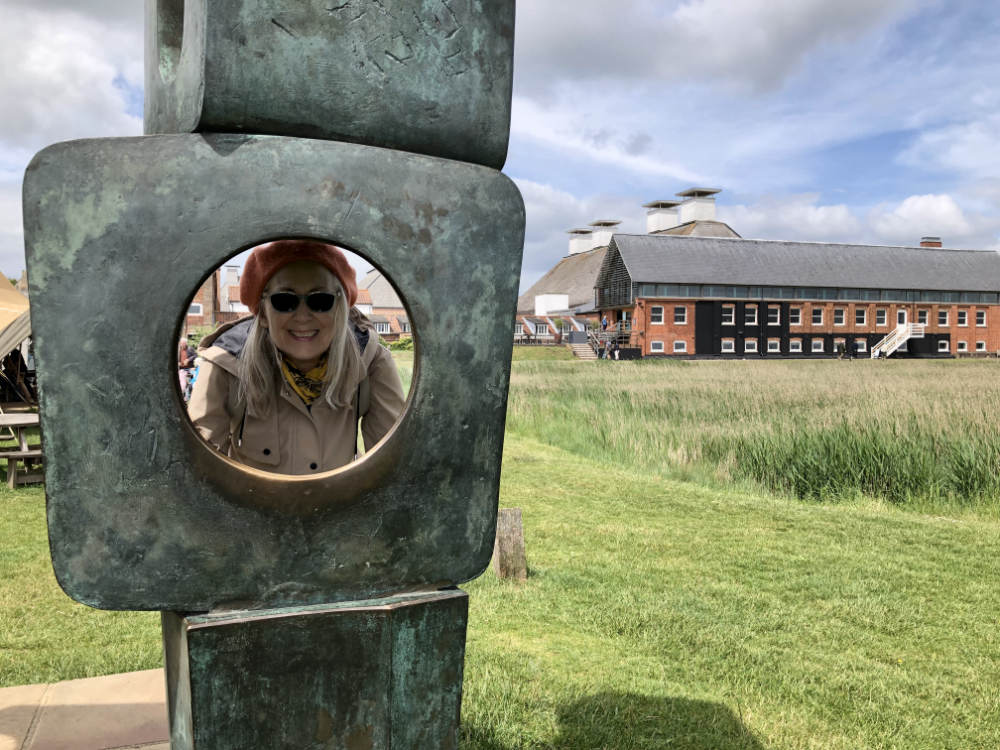 And oh joy, on Wednesday the sun came out!  This was the day we went to Aldeburgh (pronounced Albruh, I know!) which is a little town further up the coast with some lovely houses right on the seafront. Like this. 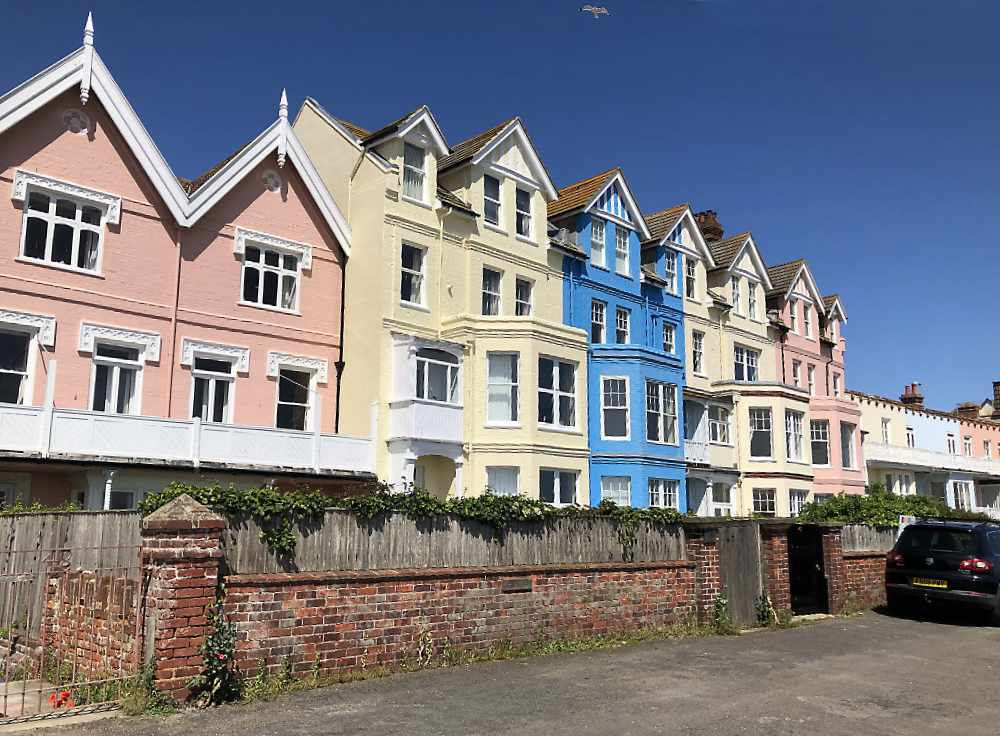 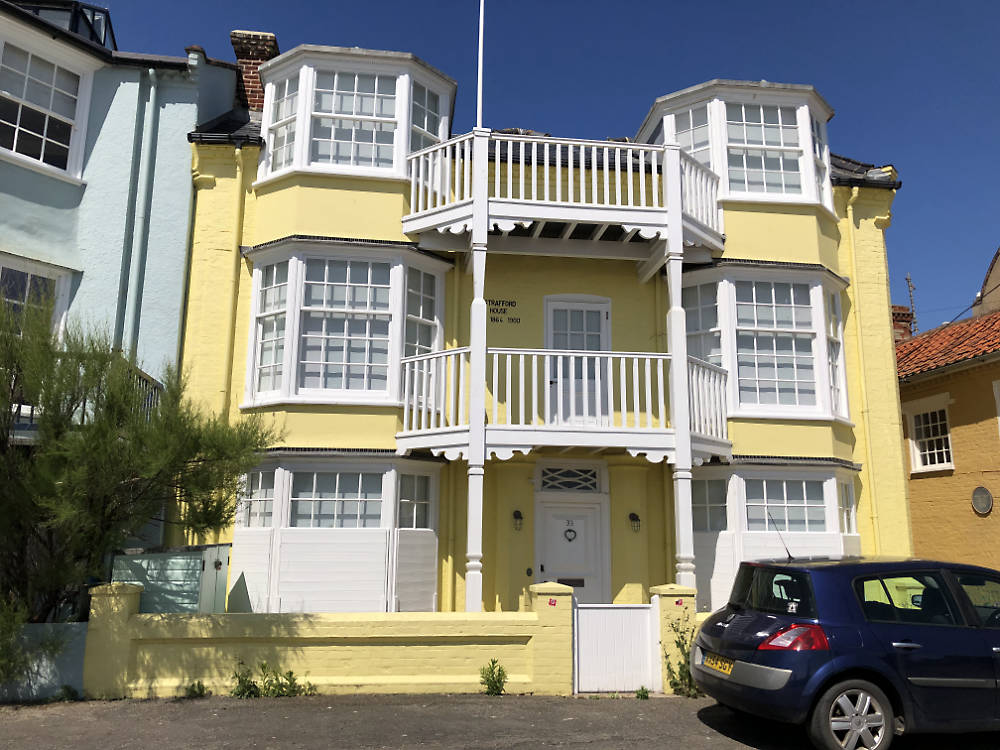 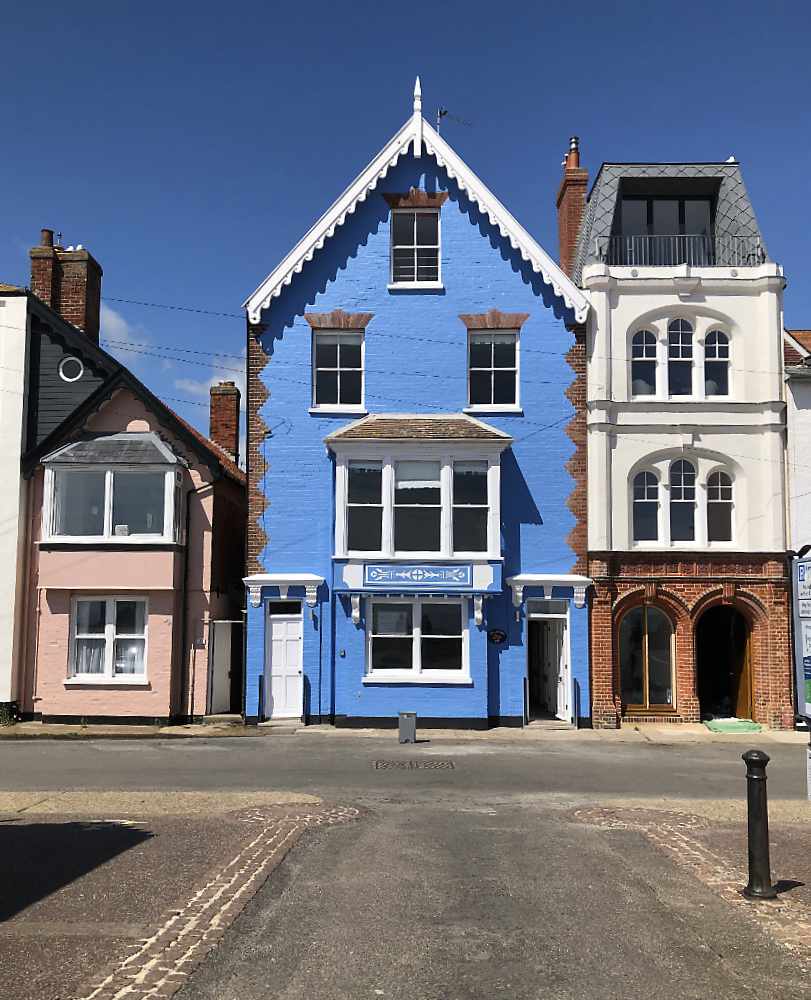 It was actually the best and hottest day of the week. However, despite the hot weather (for the UK) when you visit Aldeburgh you have to have eat fish and chips for lunch on the beach.  There are 3 fish and chips shops catering for this tradition and there are always huge queues for this very British feast, which of course in Aldeburgh is eaten from a paper bag with a wooden fork whilst sitting on the beach. But is anyone old enough to remember when fish and chips was wrapped in newspaper and you used your fingers to eat your chips?  Mine btw, have to be doused in salt and vinegar.  Mr F is the opposite to me and doesn’t like the taste of vinegar, but truly that is the best way to eat fish and chips.

We went further along the coast to Thorpness where we had a nice cup of tea! And then we walked for miles along the delightful beach which as you can see is not made up of sand! 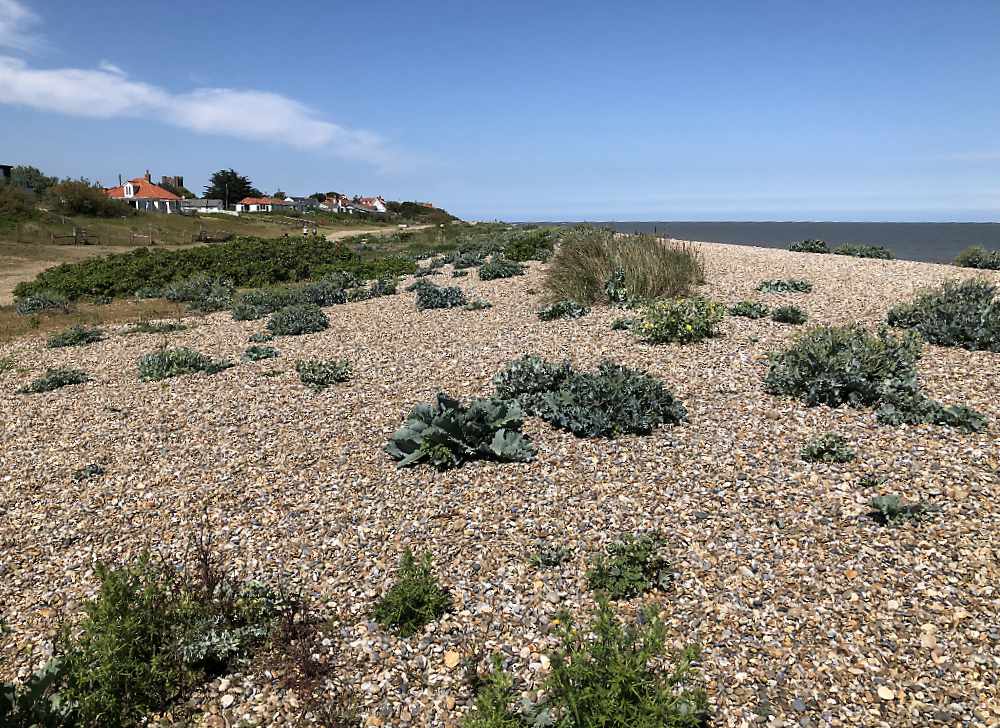 I absolutely love the sea kale and sea cabbage that grows on the shingle. 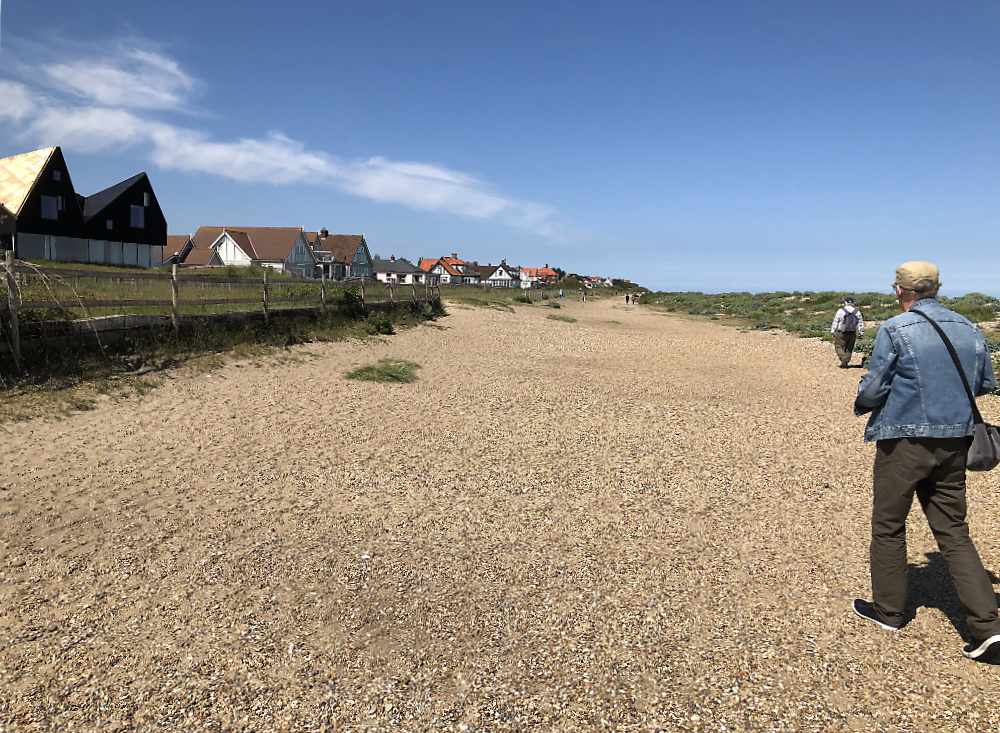 It’s such an unspoilt quiet spot and is well away from the usual crowds that one can find in Aldeburgh.

Wednesday was the best day for the weather but the next two days were warm enough and it didn’t rain – yay!  Here are some more shots of the streets of Woodbridge which might explain why we return to this small town again and again. 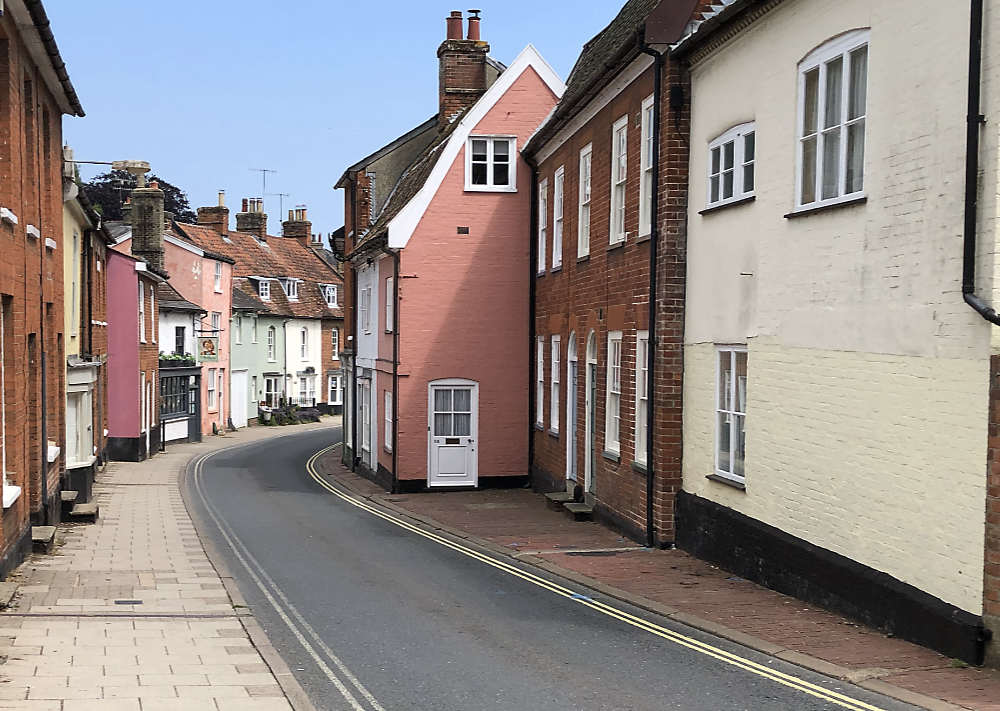 Do you see the pink houses? Apparently houses in Suffolk have been painted pink since the 14th Century when juice from berries such as elderberries, blackthorn and sloe was mixed into the white paint. 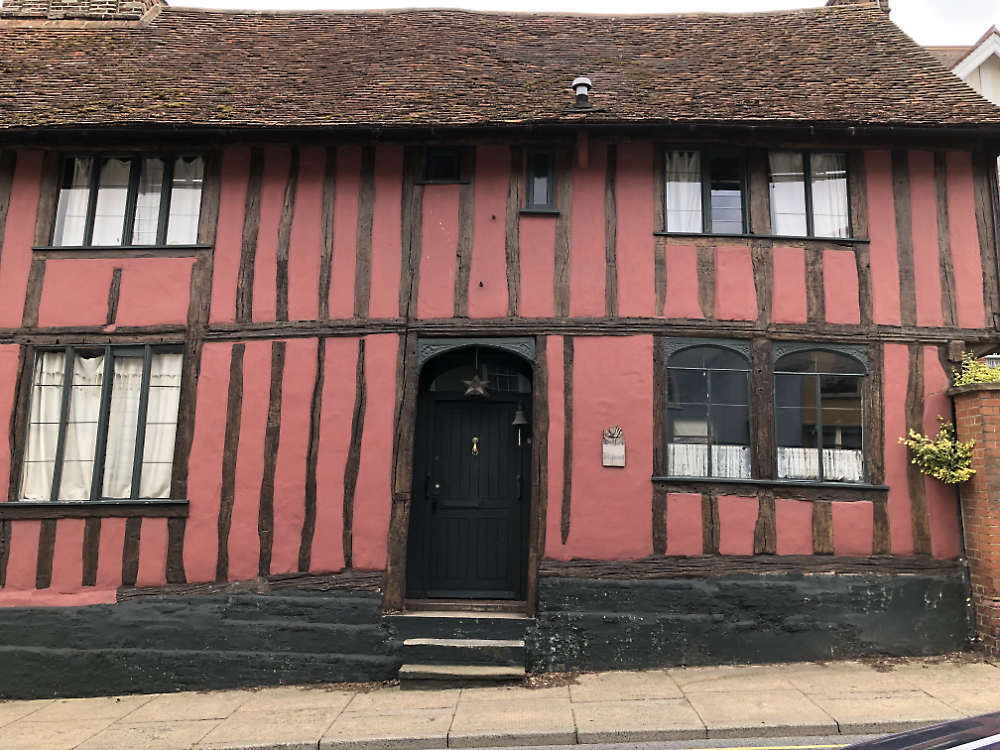 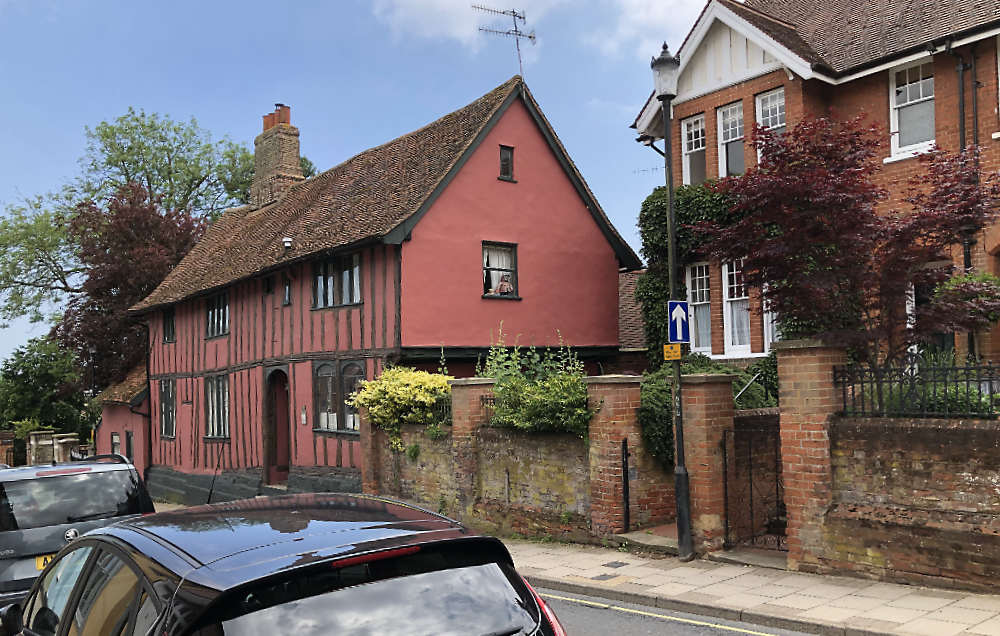 And here is a well known Woodbridge pub. 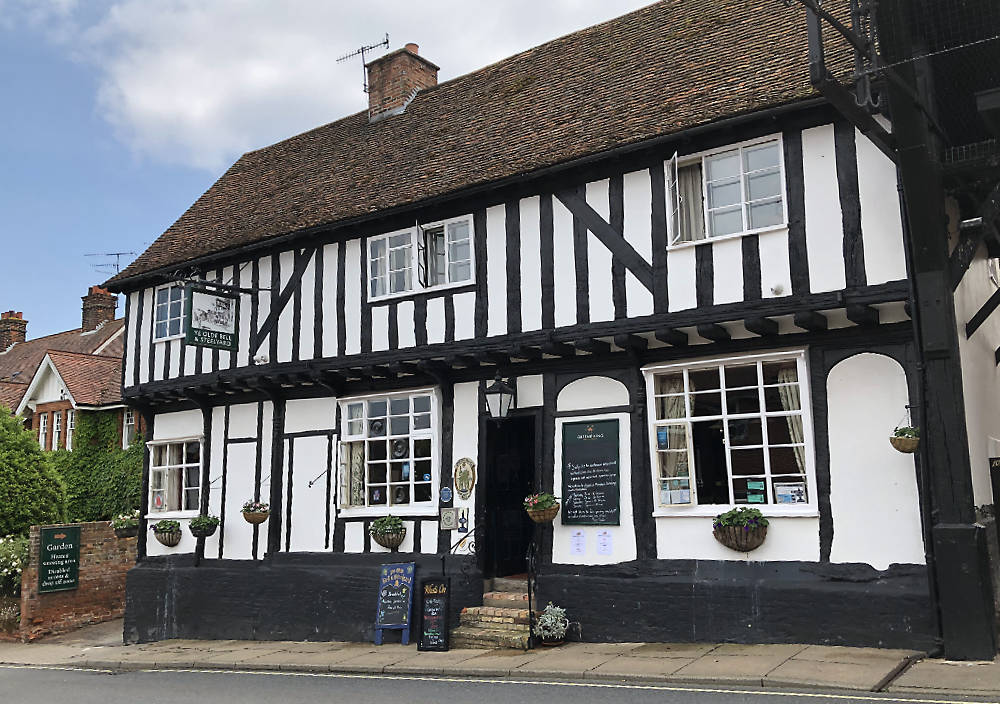 On the Friday it was overcast but we went on one last long walk along the riverside. 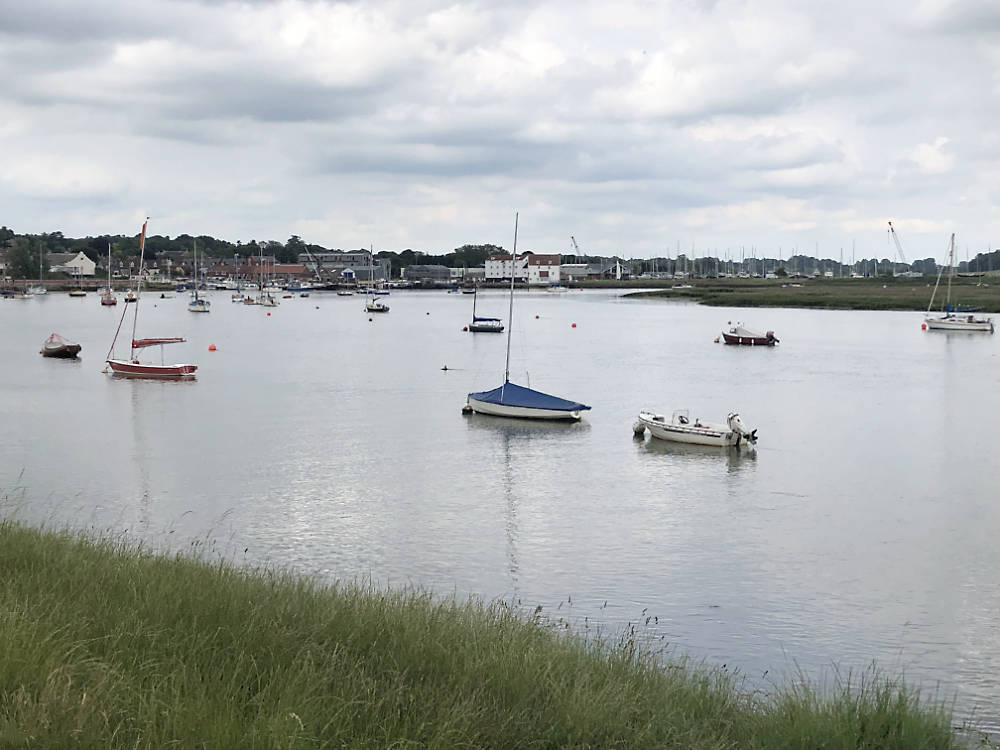 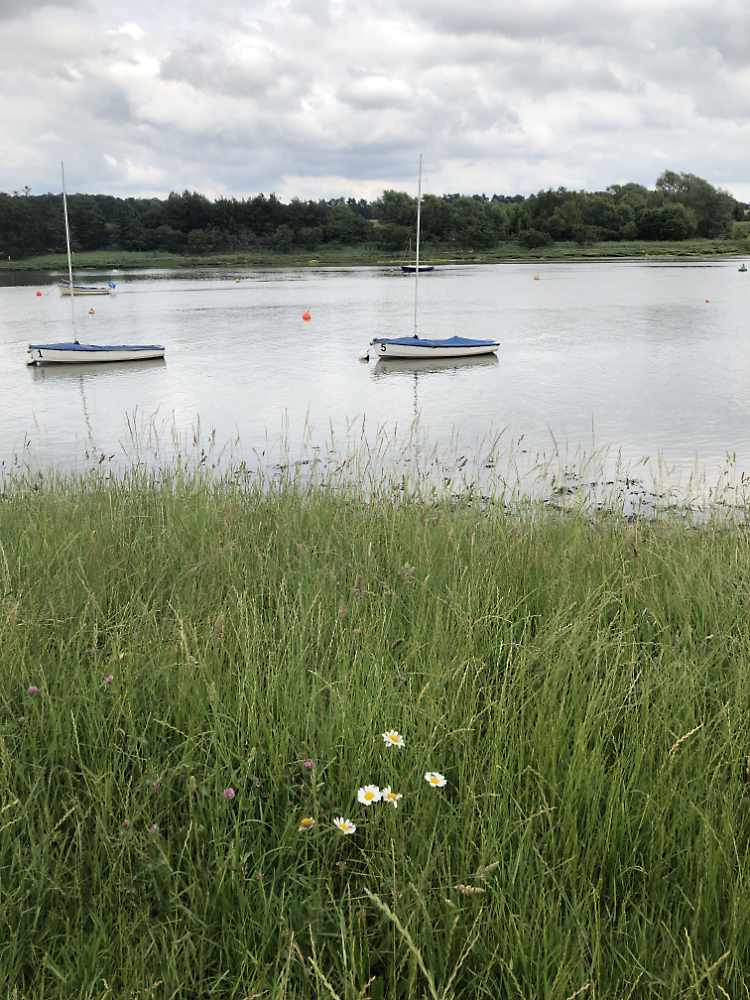 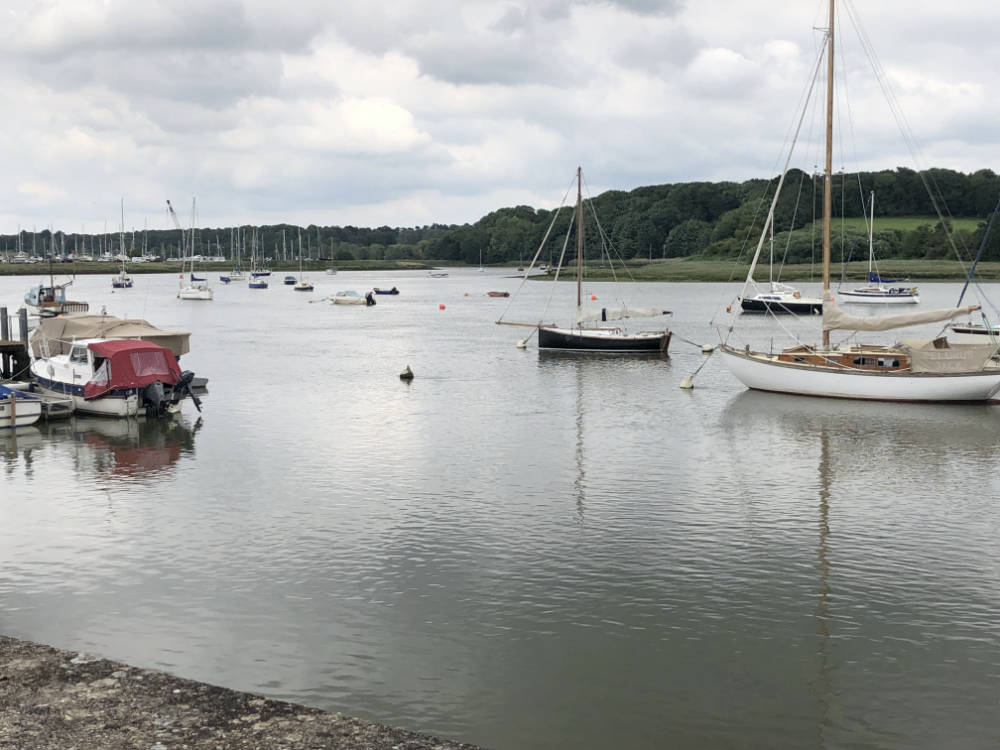 And then on Saturday we traveled back to Brighton.  Thank you for allowing me to tell you the tale of my week away, it has helped me remember the highlights of this lovely part of England.

I hope you too manage to get away. It was our first holiday since August 2019 and it was such a joy to have a change of scenery.

42 thoughts on “Back from my holiday and so much to show you!”