Apparently wearing an all-white outfit is the latest in thing in fashion circles, say the fashion journos, and who am I to argue with this. Did you know that this wearing of white is meant to be a homage to Wimbledon, which I am so sad to be missing. While the footie seems to be back with a vengeance, oh how I am missing this event, and the Tour de France, especially the latter. We have been devoted to the Tour ever since it went past our front door (well, just up the road) when it came to Brighton on the 6 July 1994.  We had no idea it was such a spectacle with an hour-long pageant of motor-bikes and other mad items fronting the actual bike race. We’ve watched it on television faithfully ever since. We haven’t travelled to France to follow it (that’s kind of on my bucket list of things that I know I won’t do) but we made a special effort to see the second day of the Tour when it started in Yorkshire in 2014.

And, I say yippee to the start of the truncated Grand Prix. The first race was on Sunday, because while football means nothing either to Mr F or me, Wimbledon, the Tour and the Grand Prix are always looked forward to in our household, and we feel, well, thrilled and excited watching them. Yes, I can get a thrill from watching both the motor racing and the bike race in real time.  We are dedicated sports fans to those three annual events.

Back to the wearing of white! Actually, I have been wearing my white tee-shirt a lot these days, plus the white cropped trousers. The thing is I wouldn’t normally wear white through the summer as I usually use public transport to get around, and really, one cannot guarantee the seats are pristine, but these days it’s the ‘walk’ that gets me out, so with just a short walk down the stairs (I don’t use the lift, and I walk up those stairs coming back) then through the foyer, and out into the fresh air, my white clothes have remained white!

My latest buys were two sale items from Mango. 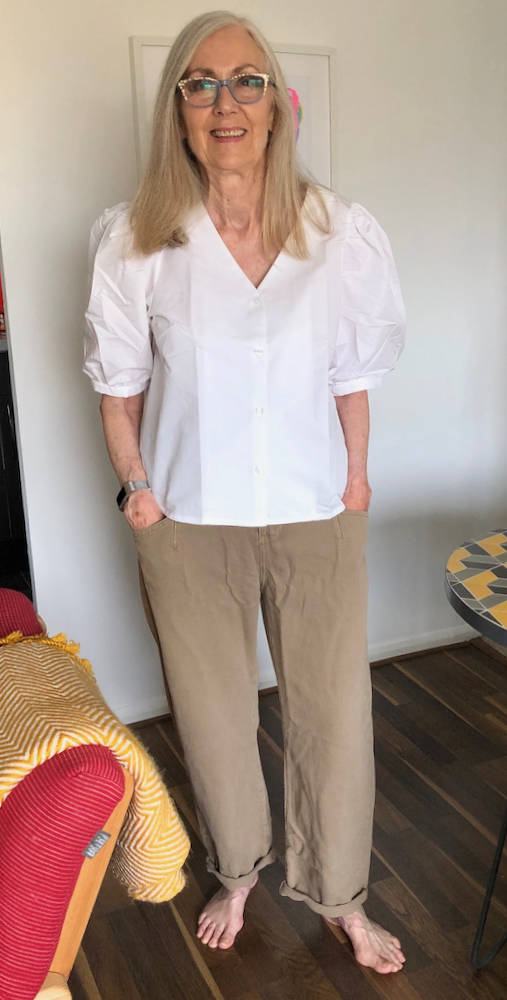 A white loose boxy blouse with big puffy sleeves, and a really comfortable ‘paper bag’ trousers. To see the waist, here are the trousers with my old tee.

Apologies for the creases but that’s how they arrived and if I can get away with it I never iron anything. When I first met Mr F (in 1973) I didn’t know this, but he had always ironed his own shirts, and that has continued through our marriage, so I never had that ordeal of ironing a week’s worth of mens shirts. Bless him, he ironed his shirts because his mother had a serious heart condition, and he thought why should that change just because he got married, which I think was quite advanced feminist thinking for 1974. Anyway, I said, oh yes, do continue the ironing!

I understand that through this lockdown the burden on women has increased with them working from home plus balancing home-schooling and housework. Where has all that feminist thinking of equality at work and in the home gone? Not sure. What I do remember is that for the short time I was at home with babies, and then two small children, all we did as young mothers was sit round our kitchen tables raising our ‘consciousness’. I read all the books on it avidly. Do young mothers do that nowadays? Or is it that we gained the notion that work was central to all (because note I had to resign from the Civil Service when I got pregnant) but now women are probably far too busy juggling work, alongside children, ageing parents, cooking and housework to even begin to think of things like ‘feminism’, which was all we thought of back then.  But I was really grateful for that break from work as I found time to start an Open University course with fees that were affordable. The reason for the OU course was that as a teenager nursing was always my goal, but I’d stayed on at school to take A-levels and had sadly failed them, and in those days that was fine as nursing was a hands-on apprenticeship rather than an academic degree course. An OU course was for me the way back to a more academic appreciation of society, and national and international events, because we were also demonstrating against cruise missiles and holding hands round the Greenham Common base. The upshot of getting good grades for two year-long OU courses was that when we moved from London to Brighton I said to myself, oh, wait a minute, there’s a real university nearby, let’s go there. And I did, graduating three years later at the age of 40 with a 2.1 in International Relations. And note I got paid to do that degree because I had a grant, and if I hadn’t received one I’d never, ever have taken this degree as I had to contribute to the household budget. Yes, I think we have gone backwards.

It’s cooler weather now so I’m not wearing shorts, instead its my leggings for a Zoom Pilates class.  And why do we not, as a rule, have air con in our homes? Because that was 3 days of sweating unpleasantness, and then it’s back to days of rain one minute and sun the next with a very strong, near cold, sea breeze, which is actually my favourite type of weather.

I’ve cut out the biscuits so that spare tyre around my middle is going – phew! And here’s the new blouse with my cropped trousers.

Yes, I have almost given up wearing shoes indoors!

To be honest, I’m not sure about this blouse, and think it’s too large. It definitely unbalances this combo so here are the cropped trousers with a white tee-shirt. 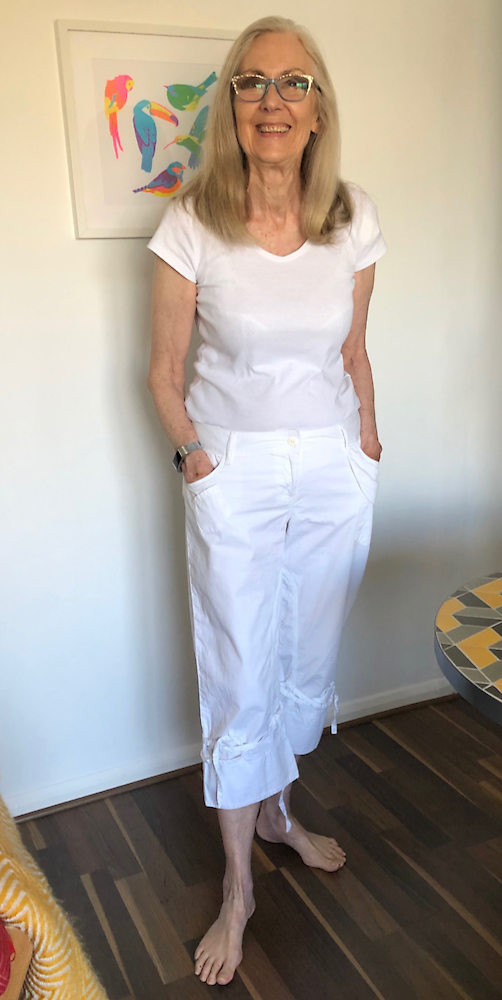 That’s better! The blouse might work with a longer item so here it is with palazzo trousers bought (blows trumpets to herald this announcement) several years ago in a charity shop – ta da! I usually wear them on a cruise.

Hands in pockets and now hands outside.

What do you think?  Too big?  I mean the blouse will be lovely to wear in the hot weather with its loose cut but I’m near to sending back. I’m dithering, what do you think?

64 thoughts on “Are you wearing all white?”