Over 15 million people are now vaccinated in the UK, apparently that’s 86% of all the over-70s. The 15 million are the people in the four top priority groups and the vaccination programme has now moved on to people aged 65 to 69.  More about all of that shortly in My Other Blog – hopefully by the end of the week.

I say ‘shortly’ and ‘hopefully’ as the whole groundhog day feeling of this stage of the pandemic has shot my concentration and every single day, over and over again, I’ve procrastinated when it comes to saying to myself, I must get down to writing the Other Blog post. However, one thing I did do last week was book an appointment with the opticians where I shall not only have a sight check but I’ll also look at getting some more specs. How the pandemic has changed us, as we’re incredibly excited to have two appointments in our diaries; one for the opticians and one for the dentist, both in mid-March, of course, when we expect the vaccine to have kicked in.

Last week was quite a cold one for us throughout the UK even down south where we are, while in Scotland we had all-time record breaking -23C which is very, very cold even for Scotland. Mostly down south in Brighton it was below 0C during the day and lower at night, brrrrrr!

We continued our walks. During that week nearly every day there were a couple of swimmers – amazing!  But none the day of this pic which was particularly clear and cold. 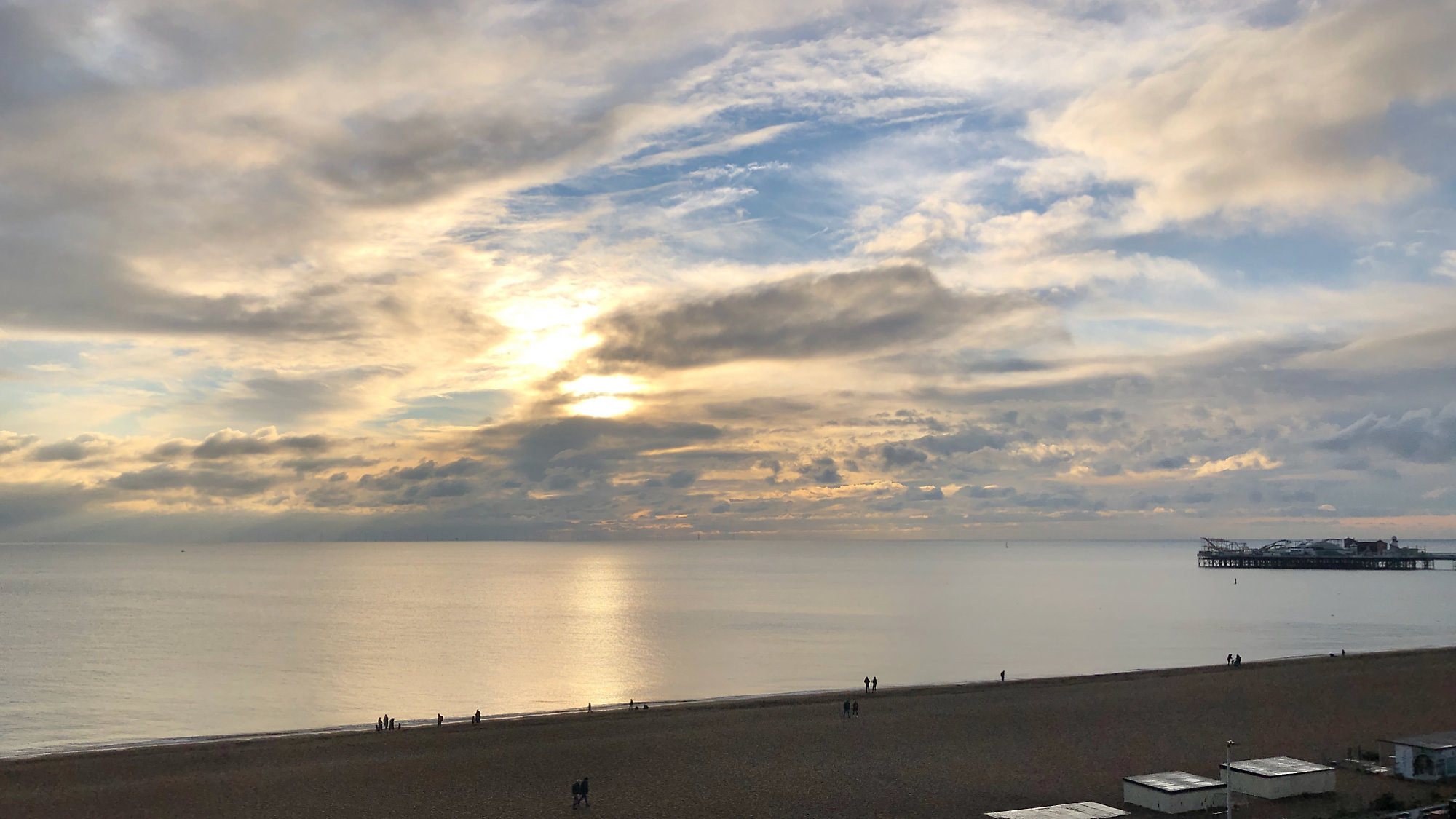 I wore the faux fur every day but didn’t take a photo of it – it was too cold to stand around for long. However, I’ve found one of the coat from two years ago when we lived the other side of Brighton. It was a leafy green part of Brighton but I do prefer being near the seafront. 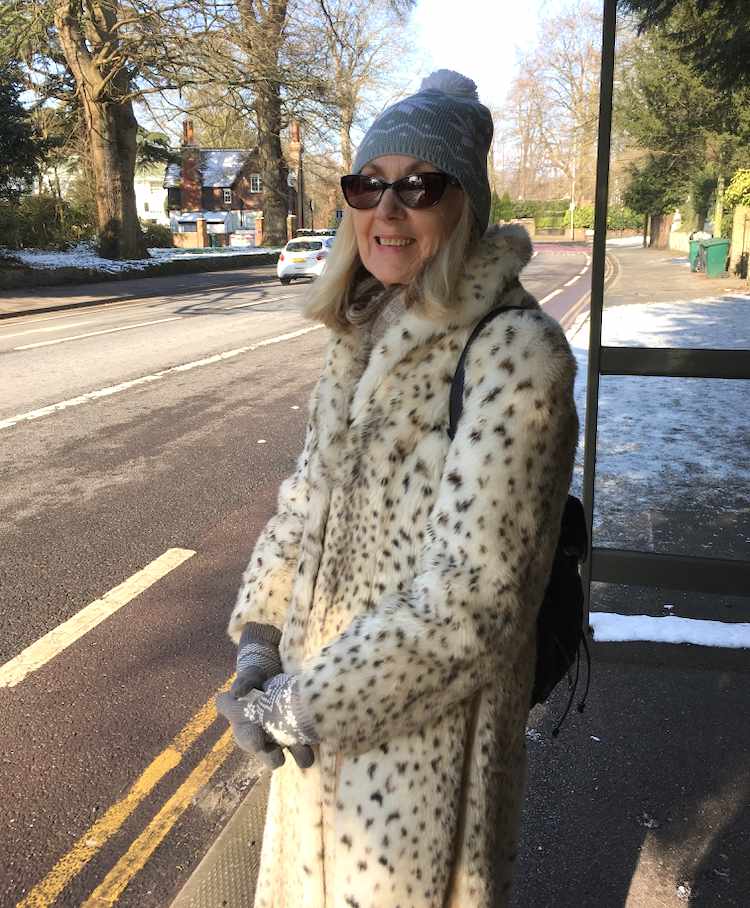 Last week I said I hadn’t bought anything online, well that wasn’t exactly true. For someone who professes to buy clothing frugally and ethically I have to admit that I’ve been scrolling through the online traders.  And people, pretty much 99% of the clothing I bought has been sent back.  How I long to go into an actual shop to feel the quality of the material, and maybe even try an article of clothing on as the majority of items were either shoddy, far too large despite saying it was a small size and just nothing like the photo on the website.

But at last I hit the jackpot!  Here I am delighted at the first sight of the garment. 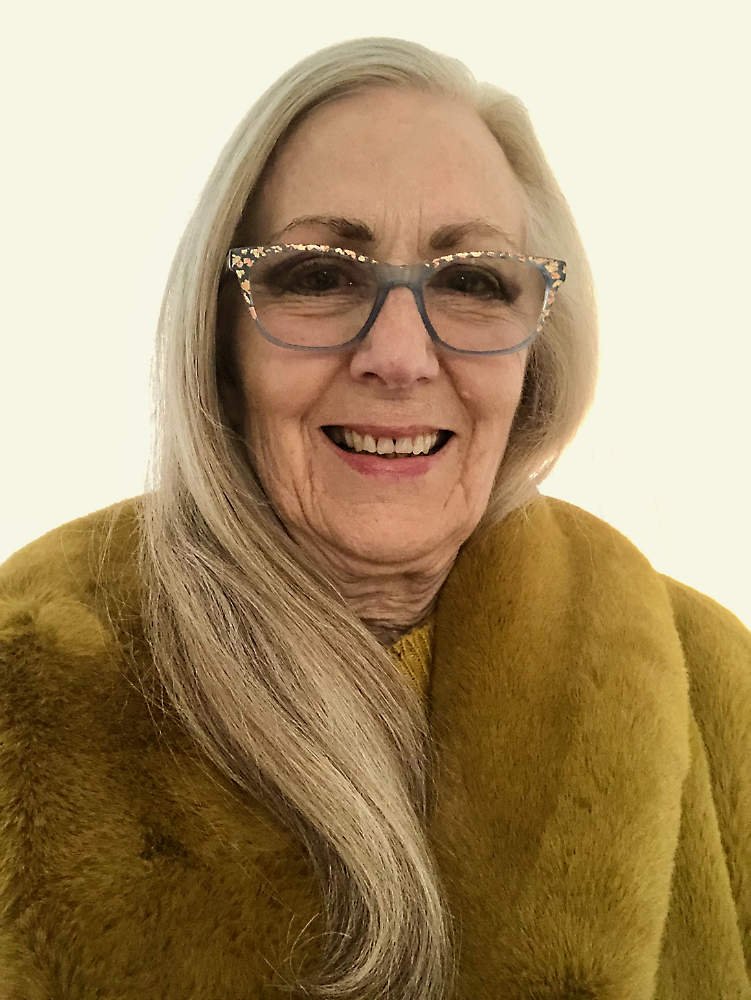 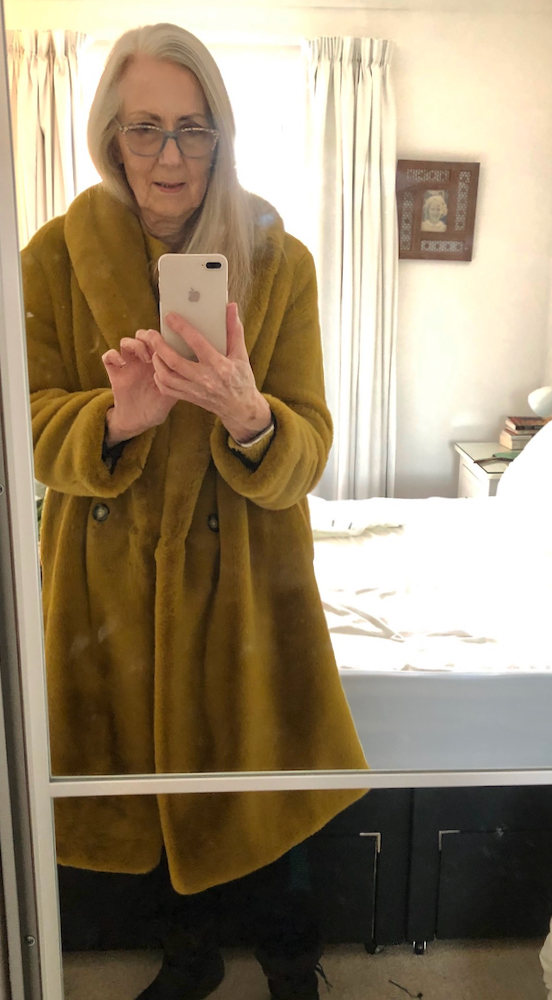 Here I am in the bedroom trying it on, sorry for the state of the bed behind me, it was change the sheets day!

I was worried that it might have to be sent back as it was size Large, and Mango Large can be enormous. But no it was OK. 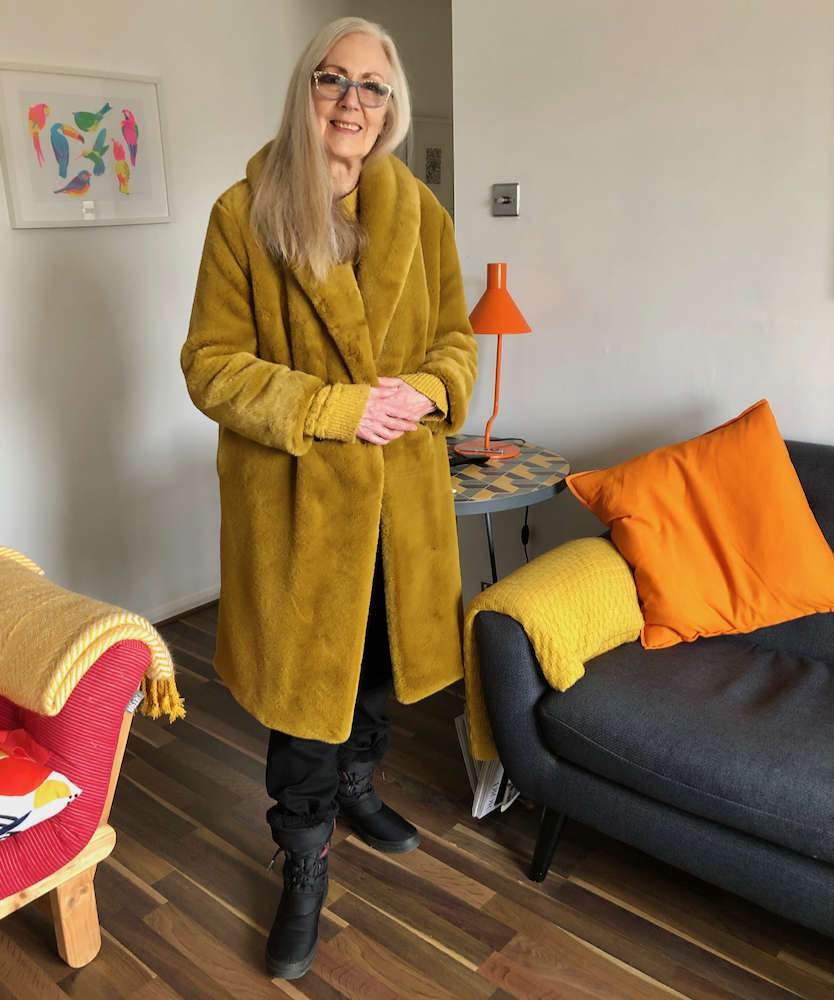 I have leggings under those black trousers, which is why I’m wearing the baggier ones that day. 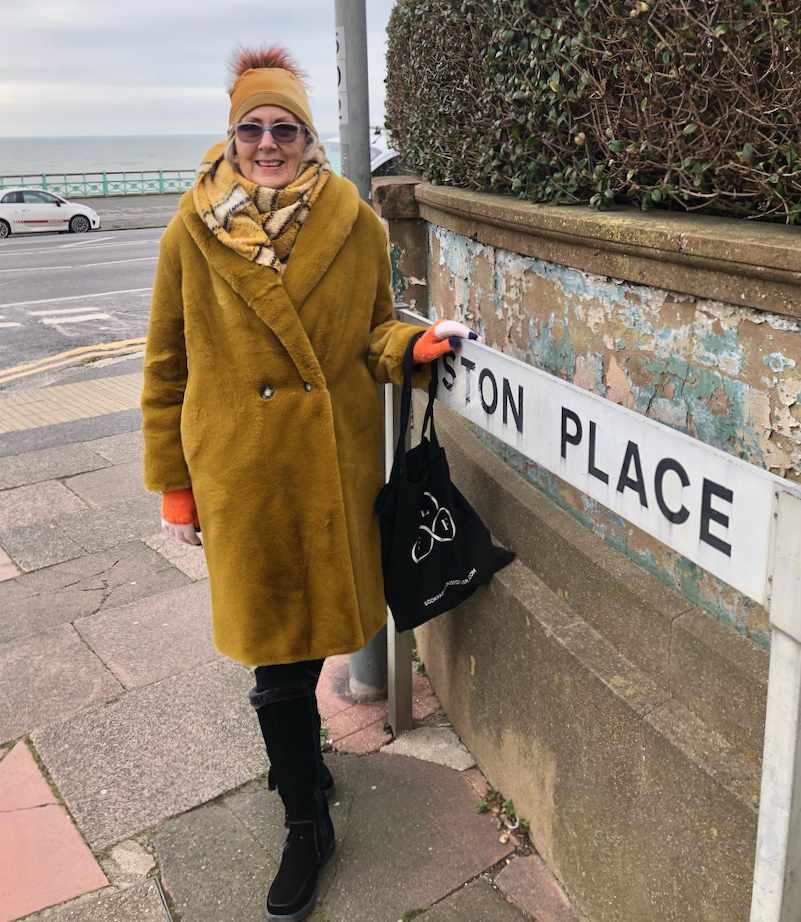 And here I am outside with an old hat that seems made to go with the coat. 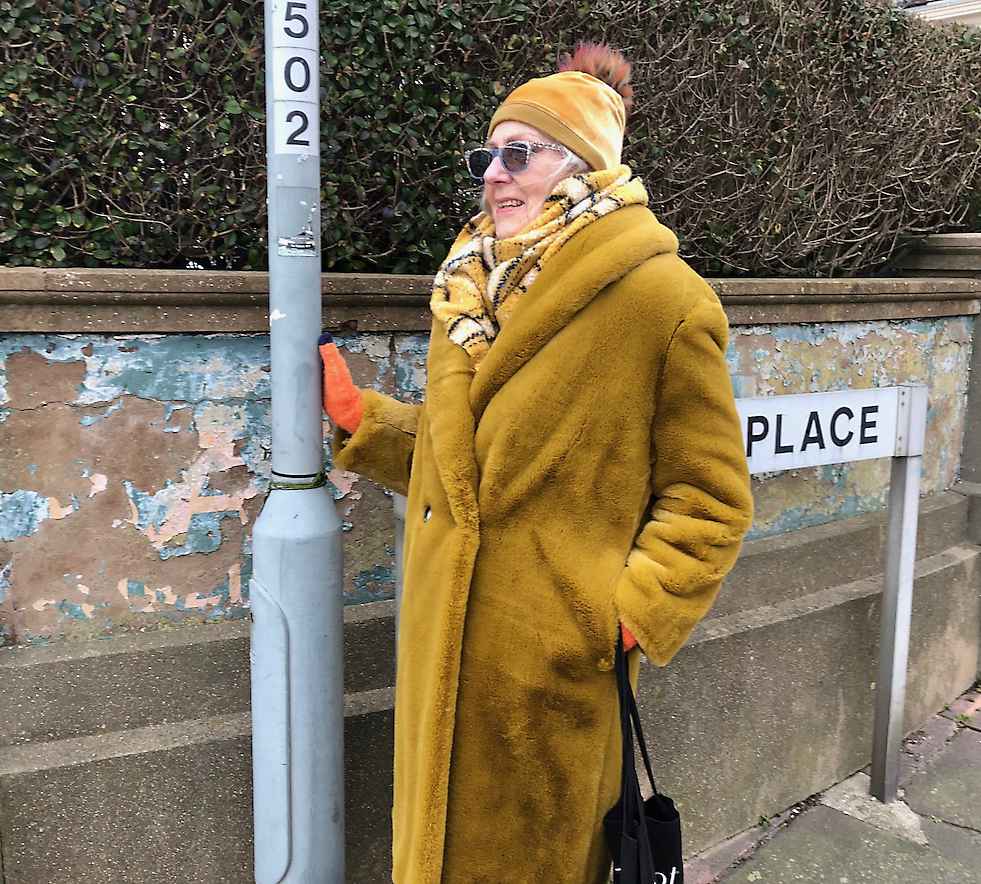 If you think the coat looks a bit bulky, I had a thick woolie underneath and the scarf is massive and tucked in, and oh my word, was it necessary as the wind was like knives. The small amount of flesh exposed felt as though it was undergoing derma-abrasion, truly the wind was that cold. To be absolutely honest, on days like that the new coat is not quite as warm as the faux fur but it’ll be brilliant in ordinary UK winter weather.

That’s all for now but have you found a bargain in the sales recently?

36 thoughts on “Another coat? Yes, and it’s colour? Yellow or maybe mustard!”