I had a significant birthday 2 weeks ago.  I turned 75 and no, I didn’t say how did that happen, as I’m all too aware of the passing years. Reaching 75 years of age feels significant, it is, I think, significant and actually on the day I woke up feeling dreadful and I had a right old wobble about being the age I’d reached.  Yes, I know, I know, age is just a number, but do you find that this is often said by a younger person! Well, can I tell you, that age and ageing is not just a number – it’s a real thing.

There is a lot out there about ageing well, but I do think some of it is about the fear of ageing and gosh, we must age well, or otherwise…. Yes, there’s many a thing one can do that helps, I’m not denying that. I have a Personal Trainer and I really do wonder how I would be if I hadn’t found her. She has helped me stave off my old lady hump and we constantly work on my posture and my upper body strength. But hey, those years do catch up on you. When I was staying at my daughter’s house her shower wasn’t working so I had a bath for the first time in four years.  Do you know what, I couldn’t get out of the bath without Mr F heaving me out of it. I’d often heard about people not being able to get out of the bath and wondered why that was, because really I wasn’t all that interested as I was sure I’d manage a bath for ever. Well, pride comes before a fall, and it happened, and I won’t say I was very upset but I was a tad unhappy as, tbh, it was undignified – blast!  However, I was slightly mollified when Mr F also found it quite challenging to get out of the bath!  The bath is not a roll-top but it is a very old-fashioned ceramic bath with ancient taps and high sides. So if Mr F found if difficult, then it wasn’t totally down to my declining strength – phew!

This is not btw, a well-researched here’s what to do to age well kind of post, because as you know I am a great fan of the Age-Well Project blog and if you want any information on how to exercise, walk or eat they have all of that at their fingertips and I highly recommend it as I think it is one of the most evidence-based advice based blogs on ageing you could wish to find. And if you want to meet a confident 80+ blogger then Joyce, with her blog Grandma Williams and on Twitter,  is a great role model as she is such a positive person yet she is also acutely aware of the pitfalls of ageing. And for beauty and her fashion sense there’s always Judith the Style Crone blogger who is also on Instagram.

Yes, going back to the pitfalls of ageing because let’s stop eulogising the ruddy thing – it’s hard this ageing lark. Joyce has often written about the ageism of furniture especially baths in hotels. Being a physiotherapist she can point out the uselessness of style over comfort because, what if the honeymoon suite, that has the high and very stylish roll-top bath, has been booked by an 80+ couple on their wedding anniversary as she did, and they couldn’t get into the bath let alone get out of it. See, it’s so short-sighted of younger hotel designers and executives thinking that the only clients for that suite would be young.

And I distinctly remember about 10 years ago, when I could get into and out of baths, that we rented a cottage that had a roll-top bath that was so high the sides were higher than (pardon my language) my crotch and people, I am 5’8″!  Standing on tip-toe I could just get my leg over!  I complained to the rental company and was told but the owner has just up-dated the bathroom at great cost, and he would be very upset to hear this. I had an image then of a rather ‘nice but dim’ young man of well over 6′. So I replied, well, tell him the bath is totally unsuited to anyone of average UK height and he should change the bath forthwith!

It’s often said that attitude to ageing is all, I’d go with that, up to a point. Here’s the thing, I think I hold a very positive attitude towards ageing whilst believing wholeheartedly in looking at what lies beyond the ‘let’s all go on lots of jolly holidays once we’re retired’ sentiment.  Retirement can be the most creative part of your life, as you can nurture the parts of your personality that were hidden while you worked.  I’m with Joyce that actually older age can be a really one of the happiest times of your life and so fruitful what with the volunteering, which with us took the form of running a film society, see volunteering can take many different shapes.  But I do take issue sometimes when good people tell you to do more and more to age well, like the Age-Well blog people in their latest blog, in this instance it’s up your walking because… and they give many reasons.  Do look as it’s a good read and I love their blog, but at the same time, I said to myself, oh blast, as my right hip is acting up these days and impacting the amount of walking I can do. Yes, I believe what they say (because it is so well researched) but actual realism has to come into it as well.

On the other hand I do believe that as you age you have to challenge yourself to the utmost so here’s what I’m doing to rectify those years that keep on coming:

My hip – it’s been diagnosed as osteo-arthritis  (I was doing that ‘giving way thing’ that happens with dodgy hips but no pain) so I am seeing a physio and doing exercises twice a day, every day.  And I do mean every day, there’s no more half-hearted attempts to try and do something in-between the two classes I take.  It’s every day and what’s more it’s working.  Hip is much improved as a result but I’m not yet up to as many daily steps as I used to do – onwards and upwards though, as well as telling myself not to get too depressed when bloggers tell you to up the walking even more!!!!!

Balance – Every day I stand on one leg and also attempt (because I am notoriously wobbly, always have been) to stand on my tip-toes.

Upper body strength  (will I ever have another bath!) I’m working with my PT to get at those muscles. I thought I was doing well, but we lose a lot of muscle as we age. Anyway, I have weights and a stretchy band to work out at home and I also do kitchen work-top press-ups when I’m cooking.

Lower body strength  Part of the reason my hip went a bit wonky is that my glutes, apparently, even with the twice-weekly Pilates are very weak, particularly the right one. And that, of course, must have come from doing nothing but sitting down for about 3 months in early 2020 when I was ill from the flu and the subsequent myocarditis. I remember one physician saying to me never stay in bed if you’re ill, but obviously I sat and did nothing and the physio told me that we lose muscle after only two weeks. Have you heard the expression, sitting is the new smoking! So people I am aiming to get a really pert backside!

And attitude? We’ve been doing a lot of tidying and reconfiguring of our flat.  I now have a room of my own which btw, is not only for writing, as my Pilates mat is out permanently for those daily exercises.  Anyway, in moving some of my clothes around I came across a dress I wore at my 50th and here it is. 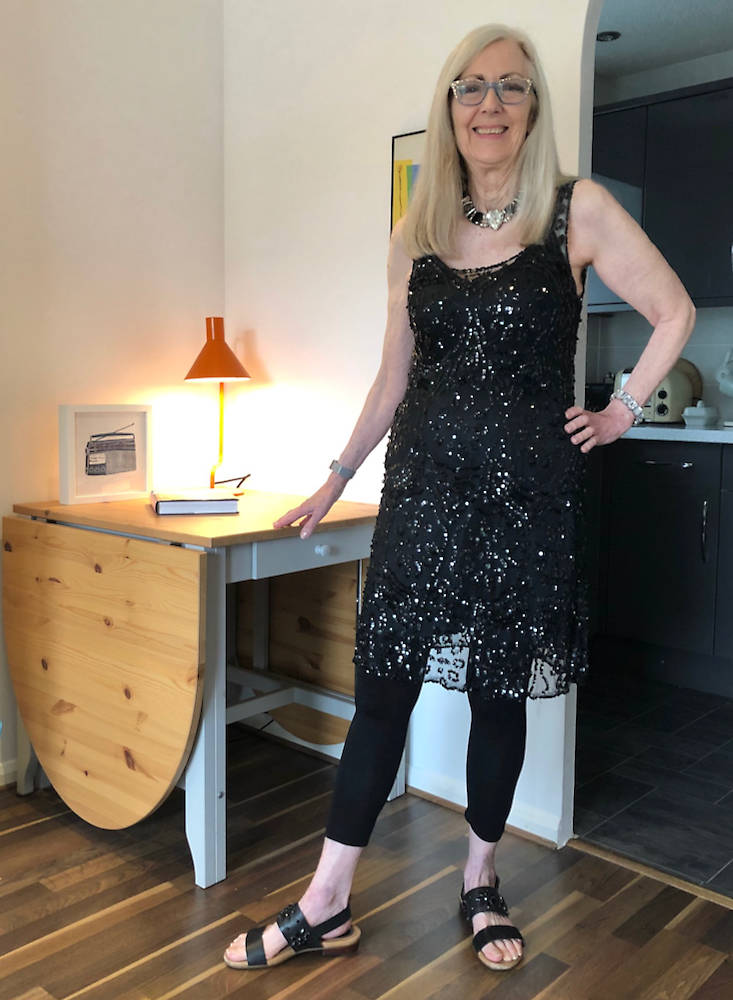 I don’t know why, but I’ve never worn it since, and yet I’ve kept it all that time. On every one of our moves it’s been packed up with all my other dresses, but then it’s gone to the back of the wardrobe and stayed there. 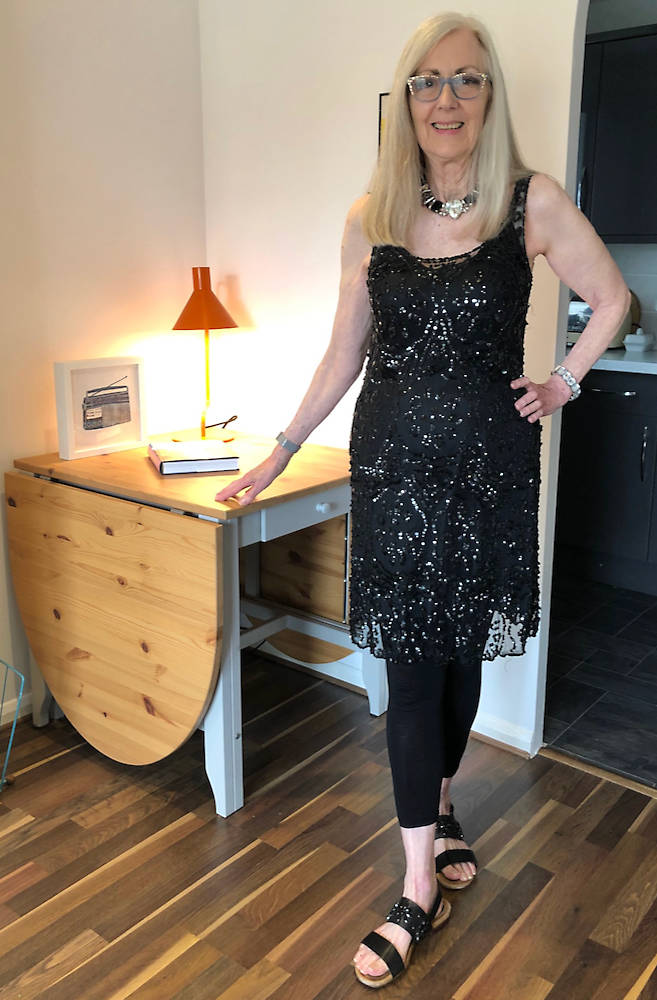 The photos were taken when it was colder hence the leggings. With the warmer weather I’ve begun the process of adding a self-tan product and the slightly browner skin of my legs is looking better than my very white, near blue skin!

But attitude? I must get this dress out and wear it for a social occasion, but for fun I wondered what it might look like with a hoody! 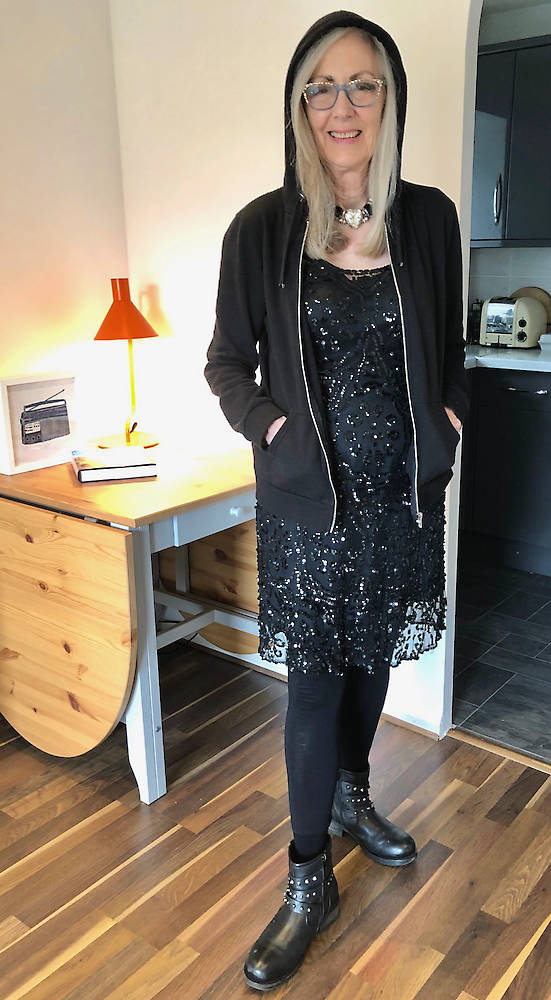 There you go!  If you ever read one of those ghastly articles in the fashion media on what 75-yr-olds should wear, think of this 75-yr-old wearing studded boots, sparkles and a hoody!

P.S. I’m away next week in lovely Suffolk. You may get a blog post next week but all depends on whether broadband and wifi signals are sufficient. I shall take lots of pix of the Suffolk town we’re staying in and the other nearby coastal towns and I’ll aim to put those on Instagram.