I thought I’d give you some snippets about this and that and items that have interested me these past few days.

My eye is nearly back to normal.  Here I am once again in the gym getting ready for Pilates. Yup, I’ve got a hole in my tights!

I’ll be wearing my contacts by the end of the week, and although I got used to wearing the specs and even had a compliment or two about the style of the glasses, I still want my face to be fully in view. It’s a strange thing this health business, and as Judith Boyd the hat blogger said in a recent blog, things can turn on a dime (she broke her ankle just like that) so, take note of the logo on my tee ‘Live for the Moment’. I truly believe you should, but it’s harder to do this in actuality, nevertheless, that’s what I aim to do.

Apparently brown is going to be the colour for Autumn and Winter (says a fashion journalist – so really, who knows) But good, as I love brown, although I don’t have a single jacket, skirt, top or coat in that colour; it’s been difficult to find up up to now.  We’ll see if the high street stores stock it in any numbers.  I did see a lot of orange items in Urban Outfitters last week but can’t recall much brown.

It’s nearly time to get out those colder weather clothes, which I’ll love doing as skirts with tights or leggings are my favourite gear along with chunky ankle boots. I made a huge miscalculation on Monday though, with the outfit I wore to the Pilates class, as I thought now’s the time to put on a thin pair of tights. Oh no, it wasn’t, I was so hot!  We’ve just had a last flurry of high(ish) temps here in the UK, so I went home bare legged. 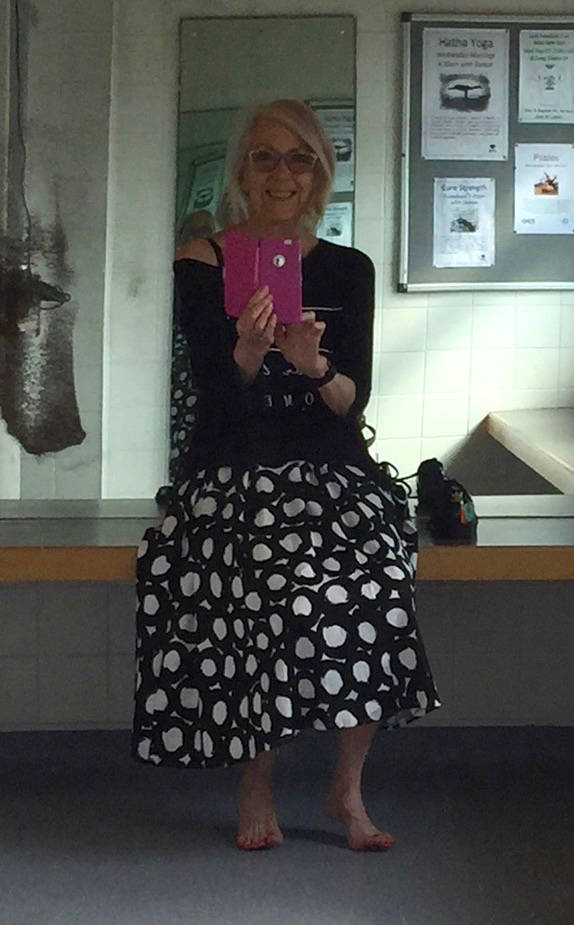 Unfortunately I’d also worn some really heavy black flats (one on the bench) so I might have looked a bit incongruous, but as people don’t really notice you as much as you think…. anyway, I was too hot to care.  That skirt is a thrifted find and cost nothing at all but it added to my body heat as it has a layer of tulle underneath to make it stick out – which is lovely but it needs a cooler temperature. I wore the tee off the shoulder all the way home.  But it’s so nice to think that once again I can start wearing my collection of thrifted skirts.

How old is your heart?  You might want to avoid this or not!  And please, don’t act on this paragraph if it’s going to upset you. But this is a bona fide survey from our NHS so it is properly researched and thought through, although note they don’t ask about exercise or alcohol intake, which I think a bit strange.  Anyway, Public Health England has a campaign for everyone in the UK to take this survey and some have had a shock. Pleased to say my heart age is 69 and as I’m 72 that’s OK, but I could get it one year younger if I reduced my BP a bit, as it’s kind of medium at 130/70 (and I have taken my BP at home 3 times several times!) so would like to get it down to 120 – along with lowering my pulse. Did you watch the Tour de France?  Apparently, Geraint Thomas’ resting pulse is 45!  Don’t think I’ll manage that, but always have an aim, and reduction is my aim but not to that number! And what is my nemesis? All the advice to reduce BP has been covered by me: weight, tick; alcohol, tic; exercise, tick; and so on. But salt. I do love salt including those naughty snacks, salted nuts. I probably add too much of it to everything. I will try and reduce what is nothing more than an addiction.

Do you feel ageless? I don’t. That is so unrealistic. Sometimes I feel good about myself and my body and my health, and other times not – see below. Anyway, yesterday I bought the magazine Women & Home (unfortunately the website is completely different to the magazine so not giving a link).  I don’t usually buy this mag, but thought I’d give it a try especially as Anna from Anna’s Island Style said she was featured in it. She is and she looks great! However, on the cover it said it was The Ageless Beauty Issue, which made me wince a bit. Why? Because here’s the thing, why do we have to be ageless as we age?  Think about it.  I mean the editor does say that we’ve all moved on from pushing anti-ageing products – well, that’s good. But. There’s an article about the lack of older faces generally in advertising beauty products.  It quotes the survey by Look Fabulous Forever finding that 98% of respondents wanted to see older models in these adverts, and 91% feeling ignored by advertisers.  However, the author’s argument is that older models are appearing in ads more and more and there’s a page devoted to these older women. And I don’t know about you but I’m getting a little tired of seeing Helen Mirren (73), Maye Musk (70), Isabella Rossellini (65) and Carmen Dell’Orifice (87) wheeled out as exemplars of older women. Because, these are what are known as outliers: exceptional women with money and status who are usually thin. They are not us. The nearest you get to someone who does look like an older woman is Glenda Jackson (82) who is also featured on the page wearing no makeup looking fierce and proud (just wow) who is much nearer to the look of older women of that age. So, I dare these advertising agencies to find real women in their 70s and 80s because only then will I believe that I can see myself in these ads.

Btw, a blog I admire that uses older women to feature clothes and fashion is Jodie of Jodie’s Touch of Style who uses her mother (80+) and step-mother (70+) as well as herself (50+).  Now they’re real women with a spread of ages and for that a big hurrah to Jodie!

Feeling positive. This is not always possible. I don’t know why but that bathroom refurb has taken the stuffing out of us (mind you we are into the 4th week and it’s not finished yet, and it is our only bathroom!) And, it’s not just me, as Mr Frugalfashionshopper also feels a bit shattered. Compounded by stress my gut has been behaving badly and I’m chronically tired, although my daughter tells me there’s a virus going round her office with everyone feeling like a zombie. Yup, I feel like a right crock, so maybe it’s a virus. But I am holding on to the fact that a month ago I couldn’t have felt fitter and more happy about my physical state, so onwards and upwards.  And normally, I am cup half full person so I will get back that positive energy and zest I did have – I absolutely will!!!!

P.S. Forced myself out yesterday and found a gingery brown jacket in a charity shop, (£5) which I’ll feature next time 🙂

19 thoughts on “A little bit of this and that”